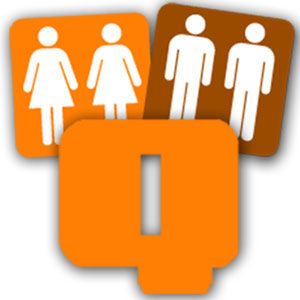 Queerty.com, the gay website with the cleverest tag-line of all time (“Free of an Agenda. Except That Gay One”), is donezo:

A message from Queerty

After more than five years of serving the LGBT community with news and entertainment, Queerty has come to a close. The decision to shutter the site was not an easy one to make, and it is with great pain that we say goodbye to our loyal readership. From all of Queerty’s writers and contributors, from our first unto our last day, thank you for spending some time with us.

I’ve always been a fan of Queerty (though less so, lately — more on that in a minute) and when we started Autostraddle.com we described ourselves as “Girlier than Queerty and Gayer Than Jezebel.” I appreciated its humor and gutsiness and their super-long snarky headlines (which I admit informed our own). It was a website for dudes, obviously, as reinforced by their two “just a photo of a half-naked man” posts a day (which always got the most hits).

But they were on top of their shit, like a gay Gawker, and after we launched we gained new kinds of love for Queerty when it started often filling its lesbian news quota with info from and links to this very website — even frequently telling their readers about the glory of Julie & Brandy In Your Box Office (something no major lesbian website has done).

I used to visit Queerty up to ten times a day, but I realize writing this that I don’t visit it nearly that often these days.  Maybe it was their attitude — increasingly relentless, biting, scathing, aggressively taking on targets from The HRC to GLAAD to, obvs, Obama — which made me feel angry and sad. Commenters got bitchy, the “question headlines” were played out, etc. 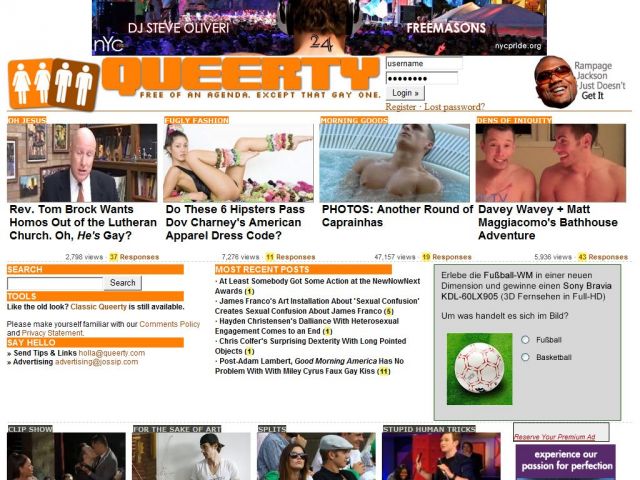 Lots of other gay bloggers hated Queerty though, like The Sword (which features naked pictures of dudes shooting jiz in the air on its main page, so maybe don’t click around at work) says:

“…there are plenty of other awful websites just like it, losing even one like Queerty, which has repeatedly fostered the wrong kinds of conversations, gloated over teen suicide, suggested fining people who acquire HIV, misled readers, gotten its facts laughably wrong, and provided a forum for some of the stupidest, most shrill commenters on the internet is still a great, great thing. Goodbye forever, Queerty!”

Queerty was on top of breaking news, did some of its own reporting and had an opinion, which was nice. There’s a lot of tension these days as blogs owned by corporations seem to be the only ones surviving and as Lez Get Real points out:

Not long ago, the folks at Bilerico and even Pam Spaulding over at Pam’s House Blend. voiced concerns about being able to continue to push forward with their sites, and it was expected that, since Queerty was funded through the corporations, that it would continue.

Unfortunately, corporations tend to be more interested in silly things like ratings and site hits than they are about getting a message out. Even we here at LezGetReal have to change a bit and have taken on a more straight out Progressive direction in the presentation of our site.

On the upside, those seeking their daily dose of gay man-meat can still turn to Towleroad and Joe.My.God and Blabbeando.

So anyhow, what the fuck happened?

Apparently Queerty had “partnered” with “the folks at 353 Media” to “handle its operations” while David pursued “other projects.” So there were conflicts and 353 Media dropped Queerty and David Hauslaib decided that he was over it:

The beat most controversially covered by Queerty, however, seems ironic now: the death of gay media, and in particular the various maladies of Regent Media (the LGBT media conglomerate that owns The Advocate, Out, SheWired, Here! TV, PlanetOut, Gay.com, etc).

In February Queerty was all over it when Regent Owner Steven P. Jarchow and a number of Regent companies including Here Networks, LLC and Regent Releasing LLC, were named as defendants in a $90 million dollar lawsuit from Merrill Lynch/Bank of America. The banks are suing Jarchow for fraud and breach of contract, among other illegal activities.

Regent then turned around and sued Queerty’s David Haslaib and associate Sean Carney (a former Regent employee) for “unfair competition, intentional interference with contractual relations, and intentional interference with prospective advantage,” but dropped the lawsuit three weeks later. (Lots of LGBT sites — including us — have stayed away from it b/c we don’t wanna be mean to SW, but Gawker has been covering Regent’s issues with not paying its writers for some time). Regent’s sites soldier on, however, and OUT still looks super fancy and Steven bought himself a really fancy house recently, so.

Let’s discuss: this is weird, right? Like the timing of all this? This makes us feel even more blessed that we have a project we’re still passionate about, that two of us do this full-time (more or less) and that when we told you that we were fucked, you volunteered to un-fuck us. And you are.

Design Director Alex and I were talking about Queerty’s shutdown earlier and she remarked, “Their message is weird and succinct. I could never imagine leaving with no notice and just those 3 sentences.” 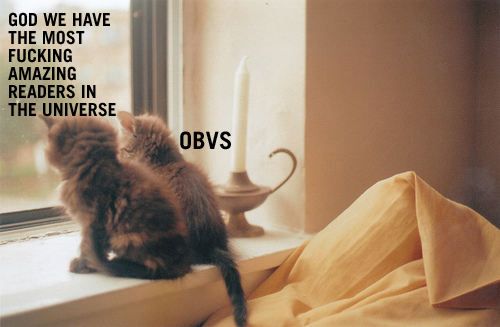 Did you read Queerty? Are you sad to see it go? Did you know Pam is considering shutting down Pam’s House Blend? Isn’t that depressing?