Samira Wiley did an interview and photoshoot with with Mimichatter Magazine on topics mostly related to her hair and skin (’cause it’s a beauty magazine), but also about LGBT issues, Orange is the New Black and her role in 37, a film about the murder of Kitty Genovese (who, unbeknownst to most people, was a lesbian). 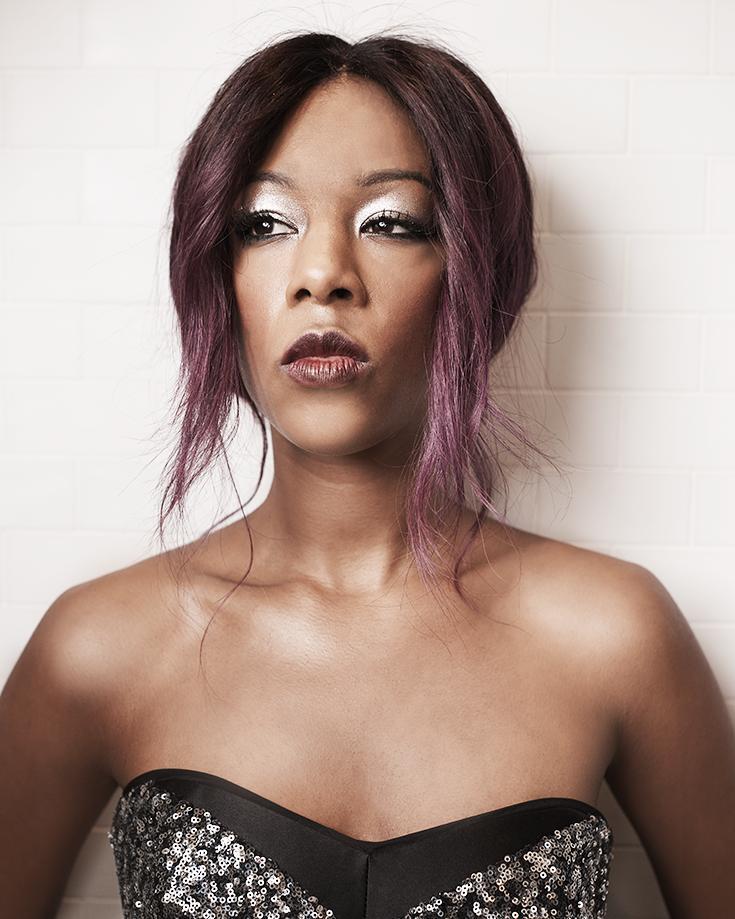 According to the interview, Samira Wiley rarely wears makeup, uses a fancy face wash, eschews caffeine, drinks a lot of water, and wants to a be a role model for young queer people. She also spoke about her relationship with Lauren Morelli and feeling flexible about her gender presentation:

“I don’t really have a word for myself, or a category that I put myself in. I don’t think about it too much, I just wear what feels good. If I can look in the mirror with whatever I have on, if it makes me stand a certain way, if it makes me smile, then I don’t care whether it’s from this end of the spectrum or the other end. I remember this belief: That Sunday is for God, and that you wear your best for God, your most glamorous dresses on Easter Sunday, and feeling like a million bucks. And growing up and learning more about myself, I feel like life is all about finding the middle, so I have gone back and forth to different styles, from girly to dressing completely like—as we would say in society and for lack of better words—like a “boy.”

+ The renowned Frank Rich of New York Magazine has written a feature story about Patricia Highsmith and Carol and “the invisibility of lesbian culture.” There’s stuff about how gay men have always been more prominent on film and television — behind the camera and in front of it — and stuff about why that is. (Here’s 50 queer and trans women who are working behind-the-camera in television, by the way.) There’s stuff about Patricia Highsmith’s career and also her personality and personal beliefs, which by all accounts sound pretty dreadful. There’s stuff about the impact of The Price of Salt, the legendary lesbian novel that dared to have a happy ending upon which Carol is based. 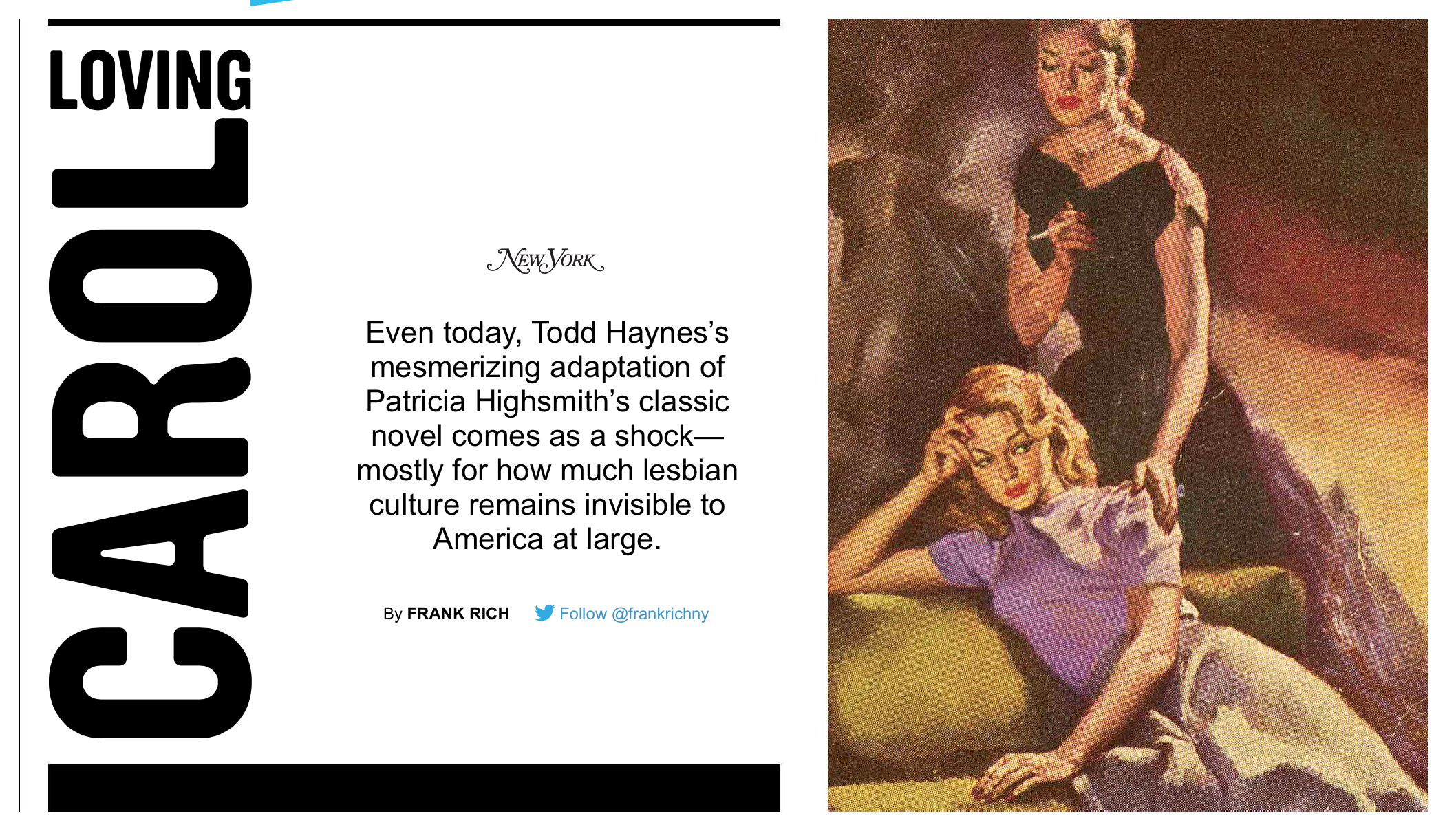 I’ve read every issue of New York Magazine for 11 years now, and I think this is the first feature magazine story specifically about lesbian pop culture since The L Word graced the magazine’s cover in 2004 with “Not Your Mother’s Lesbians.” Yes there have been other feature stories that are about lesbian life (e.g., Ariel Levy’s The Lesbian Bride’s Handbook) and stories about sexuality in general that feature lesbians and other queer women (e.g., The Cuddle Puddle of Stuyvesent High School), and lesbian pop culture appears frequently in smaller stories. But this is a big story. This is a Frank Rich essay. WHICH MAKES IT ALL VERY META.

+ Cate Blanchett is on the cover of W Magazine to talk about Carol, which I should remind you Heather says is the best lesbian movie ever made. This article also claims that gay and lesbian critics were disappointed that two straight actresses had been cast in gay roles, which is the first I’ve heard of it. Perhaps it’s true that some Cannes reporters did feel this way. But I believe the truth is that we were all disappointed that Cate Blanchett hadn’t had a number of private sexual affairs with women, because we are terrible people. Regardless, of the apparent disappointment over Blanchett playing a lesbian despite not being one, Blanchett has this to say: “Who cares if I had lesbian relationships or not? Call me old-fashioned, but I’ve always thought that my job as an actor was to raise and expand the audience’s sense of the universe.”

+ The Chicago Tribune talks to Felicia “Snoop” Pearson about her role in Spike Lee’s new film Chi-Raq, in which she plays a gay “tomboy-slash-tomgirl.”

+ The documentary Deep Run is about a trans man searching for love, faith and acceptance in rural North Carolina.

+ Vogue talks to Lena Waithe about her new book with Lena Dunham, Master of None, and being a weirdo who spent a lot of time watching TV with her grandmother.

+ “Actress Drew Barrymore remained tight-lipped when she was asked if she had ever had a lesbian encounter during a live TV chat on Monday.”

+ Tina Fey is perfectly okay with the stereotypically gay characters she has written and also the internet isn’t a force you have to obey.

+ MTV aired a special about being genderqueer last night and Anna reviewed it for you.

+ In India, MTV’s The Big F is “doing its part in bringing lesbian love into the realm of the normal.”

+ The Real Housewives of New Jersey have added a lesbian couple to its cast. I can’t wait to watch Julie & Brandy watch it.

+ GLAAD is thirty years old, making GLAAD yet another thing I am older than.

+ Is Supergirl an empowering show for women or is Supergirl Straight-Up a Show about Women Tearing Each Other Down? Regardless, Charlie Jane Anders thinks “weirdly, the show makes this dynamic not just fascinating, but actually cute.”

+ Are you ready for The Wiz: Live? I AM NOT EVEN SURE IF I AM READY!