This week’s episode of Good Trouble gave me Fosters flashbacks… and not at all in a good way.

It echoed of The Fosters season four finale when Callie climbed into a van with a dangerous pimp in an ill-advised, last second effort to save someone else from his wrath. She had a plan — Callie always had a plan, as stupid as it often was — to go with this pimp, have her cop mom track her phone and swoop in and save the day… and much like all of Callie’s plans, it went awry. That season ended with Callie, trapped alone with the pimp, singing “You’ll Be Okay,” as her cop mom tracked a cell phone headed in another direction. That episode our left Autostraddle’s recapper and, honestly, almost everyone who was still watching the show at the time (myself included), exasperated. 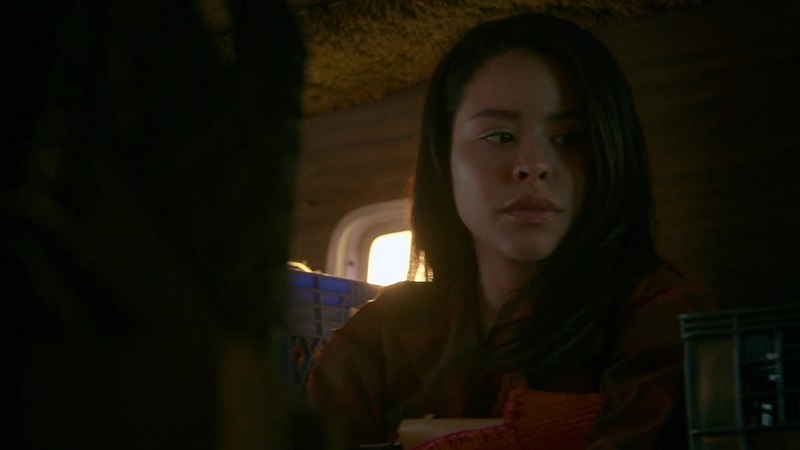 I felt that way again as I watched the prelude to Good Trouble‘s own season four finale. In it, Mariana visits the farmer’s market stand where she and Joaquin spotted his sister selling honey. Jenna’s not there this time but Mariana strikes up conversation with the women manning the table. She pretends that she’s new to the area — from a small town in Nebraska over her family’s objections — and had struck up a friendly conversation with Jenna during a previous visit. Mariana laments the loneliness of Los Angeles and the women invite her to the farm for dinner. They spin a glorious tale about the farm…almost making it sound like the Coterie, but with horses, chicken, gardens and a mountain view. I guess calling it a cult — where the charismatic leader, Silas, uses women for their bodies and their labor — doesn’t sound as good for marketing purposes. Mariana’s convinced to leave her car at the market and travel with the women, in their van, out to the farm…a farm that’s 100 miles outside the city.

You can almost excuse what happened on The Fosters. Callie was young and dumb. She’d always been prone to making bad decisions and had a particularly well-honed savior complex. At the time that she climbs into the van, Callie thinks her life is over: the next day she was slated to accept a plea deal that’d send her to jail for three years. And, at least, Callie tried to let others know where she was: Daphne knows and, plus, there’s that cell phone plan that doesn’t work. I mean, it’s still nonsense, but maybe — if you twist yourself up into knots — you can see it. But what happens on Good Trouble? Absolute nonsense.

Mariana Adams Foster is a whole ass adult, with a degree from MIT. She knows better than this. Stef Adams Foster taught her better than this. Unlike her sister, Mariana learns from the past and she doesn’t share Callie’s savior complex or penchant for impulsiveness. Mariana is a grown woman with a business that’s in the middle of a crisis. Why isn’t she focused on saving the company she’s invested so much of her career building? Why does she brush off their growing PR crisis to go save the sister of the dude with whom she has a casual relationship? Admittedly, Mariana doesn’t know the full extent of Silas’ villainy — Joaquin uncovers some dastardly shit while she’s on her solo mission — but she knows that he’s dangerous. She even makes Joaquin promise not to do anything stupid… so, instead, she opts to do the stupid thing. She pulls a Callie.

I am exasperated. I’ve been frustrated by this storyline and its discordant tone from the beginning but this week’s developments just made me angry. Not only did it take time away from storylines that could’ve benefitted from being fleshed out further, it compromised this character that many of us have been watching since 2013. Mariana is not her sister and Good Trouble diminishes that character by pretending like she is. 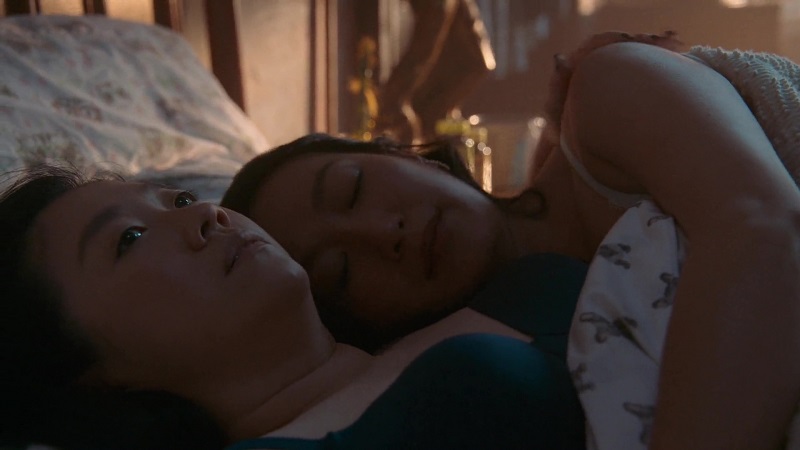 Last week, Alice confessed she’s never had an orgasm with another person before and, after their sexual pleasure workshop, Sumi’s determined to become the person that finally gets Alice that sweet release. She starts the episode beneath the covers and between Alice’s thighs. It should be a blissful moment, one that elicits gentle moans from Alice, but instead the comedienne just wonders when Sumi might be done. She laments at how long it’s taking and worries that Sumi might get lockjaw. Alice tries to focus on feeling the pleasure but it’s fleeting and she collapses against her pillow in frustration. She glances up at the ceiling and notices a new water stain which suddenly morphs into a disapproving image of her mother.

Freaked out, she beckons Sumi back up and apologizes for taking so long. Sumi assures her that she doesn’t mind but Alice is just ready for it to be over. Sure, she didn’t orgasm, but Alice insists that it was still nice and they don’t need to be so fixated on achieving the goal. To my surprise, Sumi doesn’t push Alice on the issue and, instead, just settles in next to her. Alice quickly changes the subject, asking her girlfriend/manager if she’d secured her an audition for an upcoming movie role. Sumi admits that she hasn’t heard back from the casting director yet but she promises to find a way to get Alice in the room.

Later, Alice meets up with her brother. It’s the first time we’ve seen them together since they repaired their relationship in last season’s Lunar New Year episode, and I love that we’re getting to see them interact. Alice dives into the deep end right away: she asks David if he’s ever thought about their mother while having sex. He’s taken aback by the topic but rather than change the subject to something (anything?) more comfortable, he recognizes that this is something his sister needs to talk about…so he let’s her. 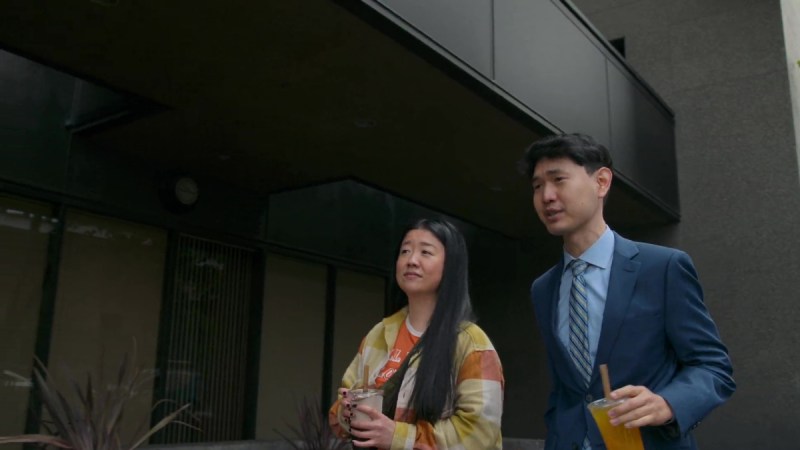 “I mean, not in a sexy way, gross, of course not,” Alice explains, after David asks for some clarification. “Just, I think about whether she’d approve of what I’m doing.”

David acknowledges that her mother most certainly would not approve, not because it’s lesbian sex but because it’s sex, period. They recount the limited amount of sex talk they got from their immigrant parents. Alice recalls that the only thing her mother ever really told her about premarital sex was not to have it (“no one wants to pick a flower with no petals”). David admits that their parents’ decision to never talk about sex has made it harder to have healthy feelings about it. David (jokingly) volunteers to give Alice some pointers on pleasing a woman and, as any sister would, she recoils in horror at the mere thought. She returns the favor, though, by mentioning that she’s honed her acting skills by learning to fake orgasms… which falls squarely into the TMI category for David and now, it’s his turn to recoil. I love this relationship and hope we get to see more of them.

Back at the Coterie, Sumi returns to Alice’s loft with good news: she hasn’t secured Alice an audition for the movie through the proper channels but she has found a way to get her foot in the door. The only thing? They’d have to ambush the movie’s director, who’s staying at a hotel in downtown LA, and use the opportunity for Alice to pitch herself for the role. Alice agrees and waits with Sumi in the hotel lobby for the director. But there’s one thing we know about Sumi, it’s that she’s indefatigable: if there’s something she wants, she’s going to find a way to get it.

She manages to get the director’s room number and her current location — poolside, natch — from the front desk clerk. Sumi orchestrates a scenario to get Alice some face time in front of the director. The impromptu display is awkward and obvious and compels the director to threaten to call security. The threat is enough to see Alice scurrying for the exit but Sumi stays and apologizes for ambushing her. Sumi explains the circumstances and the director invites her to audition. Sumi scoffs at the notion — she’s there on Alice’s behalf after all — but the director likes Sumi’s fire and commitment and wants her to try out, not Alice. Sumi seizes the opportunity and passes along her business card to the director.

When Alice — who’s been cowering around the corner, wrapped in pool towels, this entire time — asks what happened, Sumi insists that they’ll talk about it later. So maybe we don’t have to worry about Alice’s lack of sexual gratification after all, because when she finds out about Sumi snaking her audition, they might not be having sex anymore anyway.

+ The time spent on Mariana pulling a Callie would’ve been better served fleshing out Gael’s change of heart about becoming a father…because the shift felt so abrupt. I can appreciate that he’s felt obligated to follow Isabella’s lead throughout this pregnancy — that’s a noble thing to do, I guess — but if he’s never really wanted to be a father, this entire storyline feels like a waste.

+ Not the Denvia merry-go-round again! It’s not even worth investing in Dennis or Davia’s new relationships because the show will always, predictably, bring us back to them. That said, I did think they’d give Davia’s problematic relationship with Asher a little more time before his ex-wife showed up.

Next Week: All hell breaks loose!