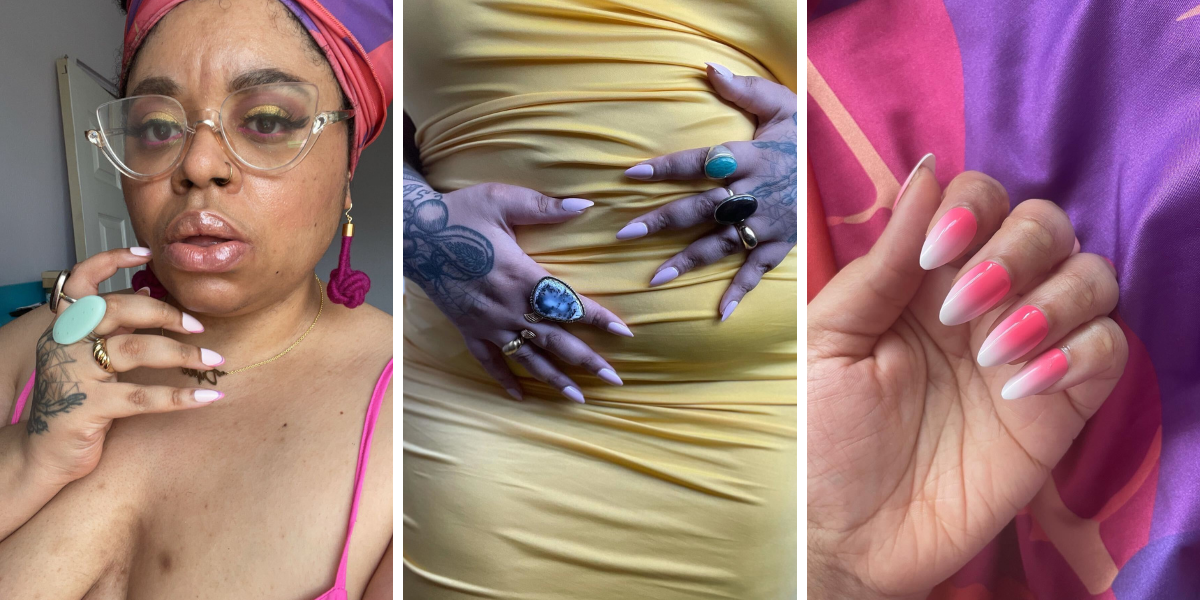 Growing up, there was one compliment I always heard from other people: that I had great hands and beautiful nails. My nails grow like crazy and get very long within a matter of months. I tend to just let them get wild. Because I am used to letting them grow, I don’t have many of the problems people associate with long nails. I can type, open things, take care of my body, and have sex with long nails just fine.

I was the envy of my sister and other women who bit their nails aggressively. Once, at a party, a woman walked up to me and said: “I had to come tell you, you have very healthy nail beds.” It was a weird come-on, but it worked.

My nails have been a source of pride for me for many years.

Recently though, I’ve noticed that my nails have grown, well, weaker. They break really easily and bend with pressure. I’m not exactly sure what has changed, maybe something in my diet, but it has caused me a great deal of disappointment to watch my nails slowly lose what made them so beautiful: their strength.

***
Like many femmes, I love a well-manicured nail. I love watching people show off a fresh set. My favorite shape is the almond, but I also love the look of a black stiletto. Sharp, eye-catching nails are my style, and with my natural nails growing weaker, I turned to fake nails to give me the look I was craving without the commitment of acrylic nails.

There are so many options for glue-on or press-on nails out there, but a problem I ran into early is that some of them were not long enough to cover my natural nails even when I cut them down. I had bought Olive and June nail polish before and, soon after I made my first purchase, they launched their own press-on system.

I perused the site, looking at the many designs, especially the long, almond-shaped nails. These were very affordable for me at $10 a set, so I loaded up my cart with a few and bought them, but only after watching a million YouTube videos ensuring me my natural nails would be safe.

***
When the nails arrived, I immediately cut down my own, washed them, and set out to put them on. I tried a set that had a strawberry red to white gradient first. The instructions tell you to lightly buff the surface of your nail, wipe it with an alcohol prep wipe, add glue to the right-sized press-on and onto your natural nail, then hold the nail on for a few seconds.

On this day, I got my first lesson on just how strong nail glue is. For some reason, I was expecting it to be like eyelash glue, so when it got on my fingers, I wasn’t worried. Then I tried to separate my fingers and was met with a flash of discomfort, nearing pain. It was like super glue. I got worried. I really, really did not want to ruin my own nails. Though they had been getting weaker, I still took so much pride in their length and beauty.

I continued adding on the nails, sizing as I went along until all ten were equipped with a bright pink press-on.

I immediately noticed a difference in my attitude. I extended my arm in front of my face, flicking my wrist back and forth, admiring the pop of color and the sharpness of the point to the nails. I started taking pictures immediately. When I bought this particular set, I wasn’t crazy about them. But on my hands, they really came to life. I was sold, a regular press-on enthusiast now.

The first couple of minutes of wear, I just couldn’t get over the feeling of something glued to my nail. I pried at them to see if they would come off easily, but in that state, they wouldn’t budge. My fingers felt heavy, but they were so stunning. I tried typing first, and the nails held up. Then I tried opening containers in the kitchen, but they still didn’t budge. I was careful but a little daring in my attempts to see how these nails held up.

***
I wore press-ons for three weeks straight, alternating between different colors and designs. I matched them to my outfits, coordinated my makeup for each set. I did my hair and, in general, put more effort into my physical appearance as a result of wearing these nails. I felt…femme, so connected to that identity and to my body given this new accessory.

For me, being femme is more than just adopting traditionally feminine things as aesthetic. It is a choice and an attitude. It is being wholly embodied in your self-expression, no matter how colorful and loud that is. Being femme is being unafraid. Unafraid of shape, of texture, of color. The long nail as a femme accessory is eye-catching. For me, it signifies fearlessness and an orientation toward the decadent. To be femme is to be decadent.

I continued to watch videos of women wearing press-on and glue-on nails, making sure I was doing my research and wasn’t irreparably ruining my nail beds. The Olive and June sets came off easily after a week. I just soaked them in some hot soapy water, and they popped off. The nail underneath was a little ashen, but after a wash and a massage, they were golden.

Before I got into doing my makeup more, wearing lashes, and press-ons, I described myself as a “lazy femme.” I would occasionally wear eyeshadow and mascara, dresses and skirts, and put effort into my outside appearance, but it wasn’t very common for me to do so. I would when I wanted to take pictures or go out for an event, but most days I was content in leggings or sweatpants and a t-shirt. I didn’t feel my best on those occasions, but it was what it was.

Wearing press-ons made me feel more confident and even sexier. The combination of the nails and my hand tattoos made me look and feel so powerful, so secure in myself. I was becoming the kind of femme that felt good and satisfying to me.

Just as I got attached to wearing lashes every time I did my makeup, I became very attached to wearing my nails. After the strawberry ones, I tried a nude set, then a purple and pink french manicure set. I would hunt for my next set late nights, my phone lighting up my eager face.

I know people who wear acrylics or gels probably think it’s silly, but I’m mildly afraid of those nail methods, so the nails I wear work well for me and my lifestyle. They come off easily, they look good, and they are affordable. It’s in line with my femme identity without a price tag that would make me feel like these luxuries are out of my reach.

***
After wearing fake nails for a few weeks, I started to miss my natural nails. I also was worried about my overall nail health. So I took them off and decided to take a break from them. I soaked my nails and popped them off, washed my hands, painted my nails with an argan oil supplement, massaged it in, then added a nail strengthening polish on top.

Since then, I’ve been letting my nails grow out, and they’ve definitely gotten stronger. With the exception of a couple, they are long and healthy again. I’ve been letting them “air out” for weeks now, and I feel like I’ve reconnected to my love for them. My admiration for one of my best features has returned.

I have so much pride in my nails because they were one of the only things I was complimented on as a child. Aside from being the smart one in the family, I didn’t hear many good things about myself, but my nails always got attention. I wasn’t told I was pretty, but I did hear that I had great nails and “piano playing” fingers, so I clung to that small affirmation.

Wearing press-ons is just a fashion choice, but it helps me feel so grounded in myself and my identity. I feel like a powerful femme dyke when I wear them. I still have love for my natural nails, but wearing wild designs on my fingers is such a fun way to express myself and my inner desires.

Feeling more in-tune with my femme-ness helps me feel more authentically myself. I find ways to do that that make sense for me, that I love, and that makes me feel good. I want that for every femme who is looking to add a little something to affirm themselves. If it’s nails, press-ons might also be an easy-in for you.

I still have one set of press-ons I haven’t worn yet. I’m saving them to wear with a dress I’m saving for my move. They are a red and off-white cheetah print french manicure style nail, and they are my favorite of the bunch. The dress I plan to wear them with is a similar off-white color, and I think they will be perfect for the look I want to create, perfect for the person I want to be.

danijanae has written 116 articles for us.