This piece has been a long time coming. On June 24th, 2022, I sat next to my mother on the couch in our family home. Some trashy reality television was probably playing in the background. I checked my phone and I see the notification from CNN on my phone.

Like so many people, the devastation I feel about the Supreme Court’s federal ban on abortions is to a point where words don’t feel adequate. We all have the right to feel our pain and express our pain. No one should dismiss or invalidate anyone’s hurt. Sharing my pain about the ruling with others – talking freely and crying out frustrations with loved ones in safe spaces – is one of the most effective ways of coping for me, personally. Community is healing.

While trying to process everything, I noticed a certain pattern of comments from tapping through Instagram stories and popular Tik Tok videos on my FYP:

“I can’t believe women no longer have reproductive justice.”

“The position of women in society is going backward.”

“Women’s rights were taken away.”

All of these comments carry truth, and I’m not trying to completely negate them. The overturning of Roe v. Wade is a major step back. But, these comments are over-generalizations. We need to be intersectional and reframe our conversations surrounding reproductive justice. Womanhood isn’t an isolated identity and it isn’t a monolithic group. What white cis women today are experiencing is what women of color have experienced for decades, for centuries. Black women are routinely denied or mistreated in reproductive healthcare to the point where the lives of Black women are at risk. Modern gynecology exists because of cruel experiments that were forced upon enslaved women in America. There is a long and extensive history of the bodies of women of color being exploited in “the name of medical progress,” misunderstood, and not receiving necessary care.

Also, these comments erase trans, gender nonconforming, and nonbinary (TGNC) folks from the fight for reproductive justice. According to the Positive Women’s Network’s page on trans-centered reproductive justice, “One in three TGNC people delayed or avoided preventive health care, like a pelvic exam of STI screening, out of fear of discrimination or disrespect. This number is even higher – almost one in two — for transgender men.” Many trans people buy hormones outside of the health care system because they do not have adequate resources to safely obtain them.

“You messed with the wrong generation.”

These so-called “witty” social media captions are ignorant and disrespectful to history and activists who put immense physical and emotional labor toward freedom and liberation. Also, what does “we’re” mean exactly? Who’s “we”? It seems like the people behind these comments are trying to speak for everyone and putting themselves at the center.

Time and time again, many white women only stand up when it directly affects them. As a cis Latina, I know I can’t speak for every group. I will say that I’m tired. I’m tired of the white women that come to protests in Handmaid’s Tale costumes and hold up signs that say “we are the granddaughters of the witches you couldn’t burn.” I’m tired of performative activism on social media. I’m tired of the conversations that exclude the distinct issues of women of color and TGNC people in reproductive justice.

Why has this piece been a long time coming? One reason I struggled to accept is that I was afraid of upsetting people. I was afraid of comments that went along the lines of “not everything has to be about race” (everything is about race) or “you’re blowing it out of proportion”. But, I’m not responsible for white fragility, nor should I coddle it. I don’t want my silence to contribute to the erasure of TGNC people.

Whiteness needs to be decentered from the fight for reproductive justice. I’ve always said that history is a powerful tool for transformation and rethinking –  I want to share a piece of history that does just that, the history of mass sterilization and reproductive genocide of Puerto Rican women between the 1930s to 1970s. 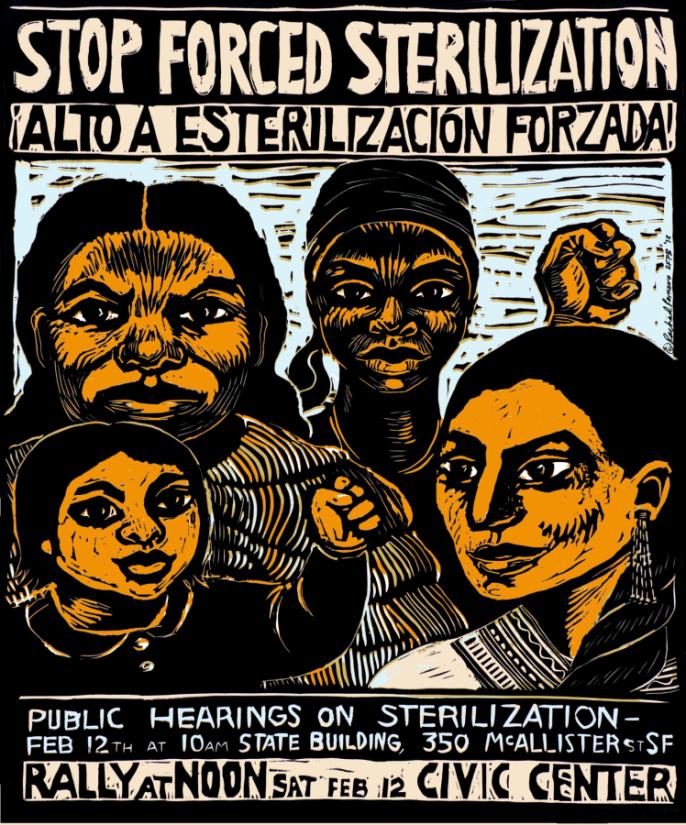 I learned the history of reproductive genocide in Puerto Rico during my last year of high school. I was never taught it in a class – I searched for the information on my own from a yearning to learn more about who I was and my history. During my time in a former organization on my college campus called Planned Parenthood Generation, I worked with another member of the group (and the only other woman of color in it) to organize a panel that addressed the history of the struggle for reproductive justice for women of color. I made it my mission to bring up the sterilizations and cruel experiments performed on Puerto Rican women because silence is erasure. It is my mission now to use this history to expand dominant conversations on reproductive justice.

The only thing I’d add to that definition is that reproductive issue is a human right regardless of race, gender, class, and ability. Reproductive justice is not just a woman’s issue. It is an issue of white supremacy, colonialism, capitalism, homophobia, ableism, and transphobia. It should always be at the forefront of human rights movements regardless of whether white cis women are directly affected or not.

A quick history lesson to understand the main history lesson. Puerto Rico was originally called Borikén and was inhabited largely by Tainos. In 1493, the Spanish invaded, colonized, and renamed the island. In 1917, The United States claimed colonizer status of Puerto Rico from the Spanish-American War. Puerto Rico’s been a colony ever since, and while it’s technically labeled as a “commonwealth” or “U.S. territory”, I don’t want to use any bullshit sugarcoating or euphemisms to hide the inherent violence of colonialism. This context is critical to understand because the U.S.’s reproductive control over Puerto Rican women’s bodies was a demonstration of colonial power.

The acquisition of Puerto Rico was a part of this fantasy U.S. rulers had of Manifest Destiny. American expansion was encouraged in the name of “civilizing” nonwhite individuals in different lands. So it was basically having a white savior and god complex. There was also an enthrallment with “neo-Malthusian theory,” a belief that “population control” was essential to human survival and connected economic status with genetics. The underlying logic behind it was that the rich were rich because of “good genes” and the poor were poor because of “bad genes.” Do y’all see this pattern of coded language? Anyway, the theory also dictated that it was the responsibility of the rich to dispose of the poor or else they’d be a detriment to society and cause overpopulation. These ideas fueled the rise of eugenics, which was at the root of the mass sterilization of Puerto Rican women.

Charles Herbert Allen, a U.S.-born politician, became the first governor of Puerto Rico after the U.S. seized the island. In his view, the island was “underdeveloped” because of overpopulation and the “excess” of people needed to be “taken care of.” Fuck centuries of colonialism and the denial of sovereignty as the roots of problems within Puerto Rico, I guess. 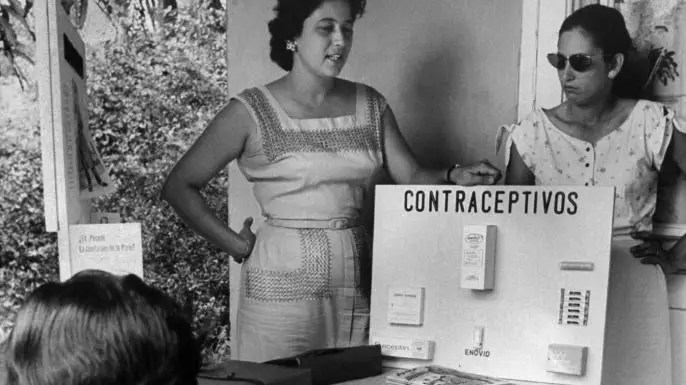 Law 116, which allowed sterilization surgeries, was passed in Puerto Rico in 1937. Health workers visited many family homes and pushed mothers to undergo hysterectomies or tubal ligations. In 1953, 17% were sterilized. In 1975, 35% were sterilized and the average age at the time of the operation was 26 years old. These surgeries were so common that they were simply called La Operación or “The Operation.” Many of these women were uninformed that these surgeries meant they would become permanently infertile and were under the impression that the inability to reproduce was temporary.

Puerto Rico was used as a laboratory by U.S. eugenicist Clarence Gamble, who tested contraceptives that were not approved by the FDA on over a thousand Puerto Rican women. The popular birth control pill we know today was tested on Puerto Rican women with the encouragement and help of Gamble. The women were informed that the drugs given to them were used to prevent pregnancy, but had no idea that they were test subjects. There were women who were severely sick, and women that died. It didn’t matter if these experiments caused irreversible damage to their bodies – they were disposable in the eyes of eugenicists.  It did not matter because upper-class white women, who were the first main consumers of the pill, were able to advance their mobility.

Eventually, the trials and experiments ended. But by the end of the 1970s, one-third of all Puerto Rican women were sterilized.

James Baldwin once said “History is not the past. It is the present. We carry our history with us. We are our history.” History also isn’t a series of isolated events.  Everything is connected — Law 116 and the fall of Roe v. Wade are violent demonstrations of bodies being denied autonomy. They also involve, albeit in different ways, white people elevating themselves and their power.

The first step toward whiteness being decentered in the fight for reproductive justice and implementing intersectionality in praxis and discourse is to listen to different voices from different marginalized groups. Bring women of color to the front, burn the table that allows white supremacy to flourish, and work toward building a new, more inclusive table. It’s not going to solve everything. But it’s a start.

If you would like to learn more about the dark history of sterilization in Puerto Rico, below are a few sources I recommend and where I got my information from:

Lily has written 10 articles for us.