Friends! It’s that time of year again! The Autostraddle TV Awards (previously the Gay Emmys) are back, and it’s time for you to cast your vote for all the best LGBTQ rep of the past year-ish! Also this week, Riese got you a present: she discovered A League of Their Own deleted scenes and told you how to watch them! Valerie Anne presented a queer read of She-Hulk: Attorney at Law. She also recapped the series finale of Motherland: Fort Salem. Lily dropped a whole lot of truth on Pretty Little Liars: Original Sin‘s enraging season one finale. Natalie recapped Good Trouble. And Heather felt distraught that House of the Dragon is hinting at queerness.

+ American Horror Stories wasn’t gay this week but Judith Light sure did act her butt off! — Drew

+ On In the Dark, mourning her breakup, Leslie went to Anguilla and “met some girl” according to her brother but she didn’t want to talk about it and it all happened off-screen so…half point for In the Dark? — Valerie Anne

+ I’m loath to recommend Look Both Ways, the new Lili Reinhart Netflix rom-com, but if there is a highlight, it’s the always effervescent Aisha Dee. The Bold Type alum stars as Cara, the queer BFF and roommate…the Kat Edison to Reinhart’s Jane Sloan, if you will. — Natalie 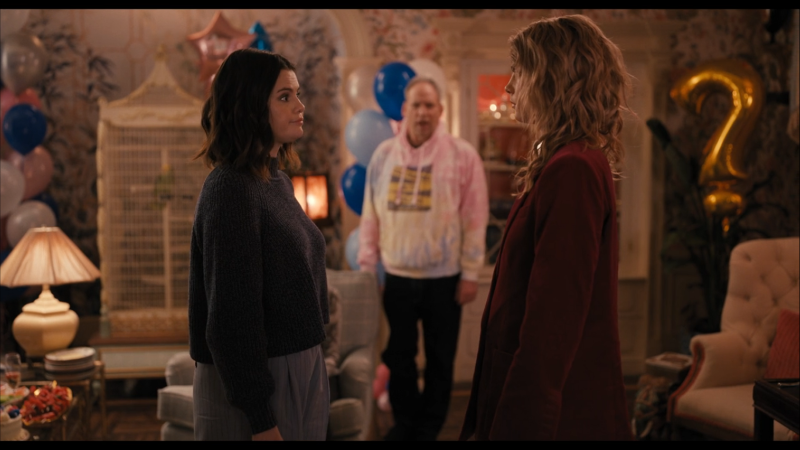 I think they could have kissed for dramatic effect but that’s just me.

In the season finale, Mabel and the guys have a Killer Reveal Party with their building pals, Cynda Canning and her assistant Poppy, and even Alice shows up. They start to reveal Cynda as the killer but then Mabel turns heel and accuses Alice. She says Alice is a “real charmer and a hell of a kisser” but also a liar and a killer. Alice lashes out, first with pointy words but then with a pointy knife. But as she lunges at Mabel, Charles pushes her out of the way and he gets stabbed instead.

They tape Alice to a chair and Cynda tells Mabel she’s impressed with her detective skills and offers her a podcast, which causes Poppy to snap. She starts ranting about how Mabel didn’t do any detective work, that it was just luck, and before long she gets backed into a corner and confesses; turns out this was all part of the Killer Reveal Party plan all along. Because they knew it was Poppy. Charles is okay, and Alice is not only in on it, but not a villain after all.

Later, when things are all settled down, Alice helps Mabel renovate her apartment. Alice looks at her art wall and asks if it will be integrated into a new design, and if maybe she will be too. Mabel smiles and says no…but Alice can help her give the wall a fresh start. So there’s hope that maybe they can have one, too.

We cut to one year later, Alice isn’t with Mabel in the theater, but that doesn’t mean anything. Mabel is there to see a play that Charles is starring in and Oliver is directing, and just as Mabel was celebrating a murder-free year, Charles’ co-star dies on stage. Here we go again. 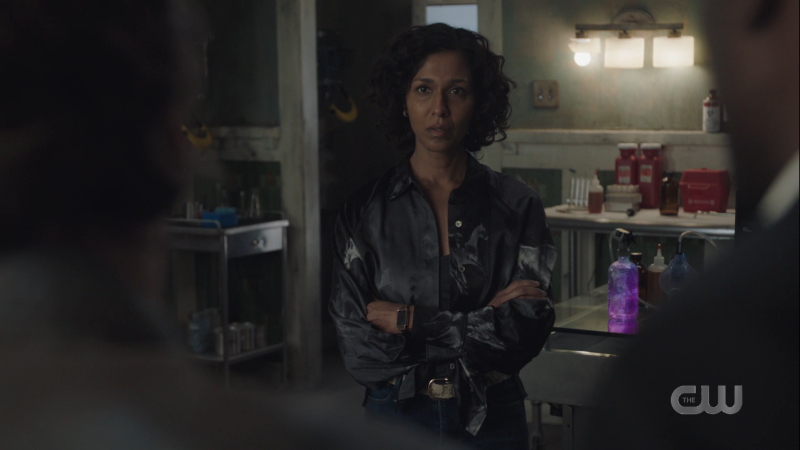 I do still like this show but sometimes I find myself watching it like this. Unfortunately not in a silk horse blouse though.

As we round the corner toward the series finale, things are getting stressful. Liz is hooked on alien mist, and the pod squad tries to have an intervention. Max partly blames Shivani and insults her marriage which frankly feels rude but he’s scared.

Meanwhile, in the upside down, Michael and Alex are finally, finally reunited. They’re so happy to be together again that Alex ends up proposing. At first I was excited that it seemed like Roswell was going to join the ranks of CW shows having a queer wedding toward the end of a show’s run. But then, Alex says he thinks he’s dying! And I guess the CW has killed as many queer characters as they’ve married so I shouldn’t be this surprised. Here’s hoping they can find an alien cure for Alex’s alien radiation poisoning.

On another note, they’re still pushing the Isobel/Kyle thing, and it wouldn’t bother me so much, but every single character is pushing them together now, and not ONE of them was nearly as supportive of Isobel and Anatsa, and I’m annoyed about it. But that’s just me.

At the end of the episode, Clyde goes to Shivani for help and, in exchange, he’ll help bring her daughter back.

Next week, The Chi will conclude its fifth season and, between now and the debut of its sixth season, I hope the show reclaims its understanding of the type of show it wants to be. This season, the show’s leaned heavily — almost exclusively — into being a relationship drama. That’s a perfectly fine thing to be — and, at times, I’ve found it compelling — but it’s a jarring turn for a show that started with the death of two teenage boys. What’s more? If The Chi wants to be a relationship drama, then it has to commit to investing in really delving deeply into those stories.

Case and point: this week finds Fatima and Victor back on their relationship merry-go-round. Fatima wants more, Victor acknowledges that he wants the same things, just not right now, she relents and, somehow, they fall into Fatima’s bed. Then, in the cold light of day, Fatima remembers she wants more and the cycle starts all over again. This week, the conversation after their most recent tryst is more pointed: Fatima insists that she’s not a fetish. Victor assures her that he knows that but Fatima notes that he continues to treat her like one. That wasn’t his intent, he acknowledges, he’s just trying to keep his head above water. This time, Fatima puts her foot down: if Victor wants to continue to live a lie, she doesn’t want him to come back. She gets a text at that moment and Victor uses it as way to re-direct the conversation. He accuses her of wanting loyalty from him but being unwilling to give it herself.

“I’m not going to be loyal to someone that’s got a beard on their face and on their fuckin’ arm,” Fatima replies.

Victor returns to the same excuse that he’s used throughout this relationship — his campaign — but Fatima refuses to accept it this time. He insists that he just wants to be a good man. Rightfully, Fatima scoffs at the notion that Victor can’t be a good man when he’s with her. She also notes that he’s recently tinted the windows to his truck, presumably so no one could see him with her. She kicks him out of her apartment and Victor leaves to spend the rest of the episode brooding over Fatima’s words.

At the Rock, Shaad approaches Tierra about their night together. He calls the experience magical but insists that it can’t happen again. She says okay and he interprets her reaction to being about her feelings for Victor. Tierra assures him that’s not the case: she only sees Victor as an opportunity. Shaad notes that Tierra is also sleeping with Roselyn and she acknowledges that she does, sometimes. Tierra admits that she’s just doing whatever she has to to secure the bag.

The next day, Victor’s still in his feelings about Fatima and Shaad nearly mistakes his demeanor as proof that he knows about Shaad’s night with Tierra. He narrowly avoids letting the cat out of the bag…though I’m not sure Victor cares enough to be bothered. The would-be councilman admits that he doesn’t know if it’s worth it anymore: he shouldn’t have to pretend to be someone else to get other people to like him. He confesses that Fatima might be his soulmate…which, I mean, in a world that pretends like his long relationship/near marriage with Imani doesn’t exist, I guess. Shaad encourages him to be with Imani if she’s his soulmate but Victor is still reluctant: they’ve worked so hard to get here.

“I’d rather you’d tell the truth and lose than lie and win,” Shaad advises and, finally, it feels like Victor is listening.

Meanwhile, Nina finds wads of cash in her son’s dresser and is convinced he’s selling drugs. She and Dre confront him about it and Kevin admits that the money’s from gaming. They both find the explanation a bit fantastical so they offer to come to his next event to support him (read: see if it’s legit). But Kevin is determined not to let his moms ruin the good thing he’s got going.