Last time we were all gathered here in the name of feminism, I recommended some solid memoirs and biographies to you that told the true stories of the women currently running shit in American politics and making history at every turn. But America is not the world, and as you know from our previous lessons, badass women exist in plethora outside of it. And thus, a follow-up post was born! 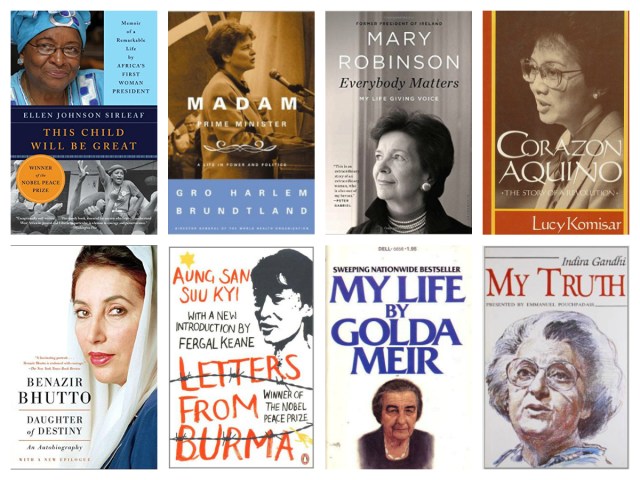 Aung San Suu Kyi is nothing less than an inspiration: A freedom fighter, a strong-willed political prisoner, and a true believer. Plus, when forces did all they could to stop her from being President of her nation, she created a special role just to make the magic happen. In this book, she describes the people who have played a part in the fight for democracy in Burma and details the tragic realities of why they’re all fighting for a better tomorrow. In the process, she makes the case for her decades-long fight to restore peace and democracy to her native land.

Daughter of Destiny: An Autobiography

Benazir Bhutto’s autobiography covers everything from her family’s heritage and power to her experiences as a political prisoner and the path she took from Radcliffe and Oxford to being the Prime Minister of Pakistan. She stood tall as a woman leader in a muslim nation and rose to prominence not only on her national stage, but before the eyes of the rest of the world. I’m buying my copy of this book immediately and then thanking whatever deity you believe in that Bhutto wrote this stuff down before her tragic assassination in 2007.

Corazon Aquino: The Story of a Revolution

Corazon Aquino was the first woman President in the Philippines, and during her time at the helm of her nation she ushered in a revolution. This book tells the story of how she rose from her husband’s shadows — and eventually became a historic figure in her own right — and covers the struggles of her first year in office.

This Child Will Be Great: Memoir of a Remarkable Life by Africa’s First Woman President

Ellen Johnson Sirleaf didn’t just make history as the first woman president in Liberia. She made history as the first-ever woman president in all of Africa. And she did so by rising up — despite a life stained by abuse, imprisonment, and exile — to become a changemaker in an oppressive political climate. BONUS: Ellen Johnson Sirleaf is the aunt to the one and only fucking Retta. So go out and treat yoself, fool. Donna would be so proud.

In which Golda Meir, fourth woman ever to be a Prime Minister and the first and only to be PM in Israel, tells her story. Honestly, who wouldn’t wanna read about someone Wikipedia says “was often portrayed as the ‘strong-willed, straight-talking, grey-bunned grandmother of the Jewish people?'”

Madam Prime Minister: A Life in Power and Politics

Gro Harlem Brundtland became the first woman and youngest-ever human being to hold the position of Prime Minister in Norway when she was appointed to the position at 41, with four kids in tow. She came to power with an activist background, including some pro-choice rabble-rousing and a childhood spent among radicals, and then went on to make history with a cabinet chock-full of women and a career that extended past politics and into leadership at the World Health Organization. In her memoir, she talks about her brushes with famous politicians from around the world and what it was like being a mom and a PM at the same time, as well as the circumstances that created her revolutionary tenure in office.

Indira Gandhi was a history-maker from a family full of them. Her father was India’s first-ever Prime Minister, and she was the first-ever and, to date, only woman to ever fill his seat. (She was also the second-longest-serving PM, after her dad, of course.) Her life in politics began during her father’s reign, and she then rose through party politics and into cabinet service and ultimately into serving as Prime Minister — and died tragically at the hands of her bodyguards while still in office. What she left behind, however, is all right here in this book: reflections on her life and her relationship with her father, passages detailing India’s rich history in the making, and even some notes from Indira about what she wishes for India’s future.

Everybody Matters: My Life Giving Voice

Mary Robinson is a badass, and everyone should know her story on her own terms. (She was the first women President of Ireland and also served as the UN’s High Commissioner for Human Rights, JSYK.) In a previous lesson, we talked about how she utilized her role as President in an unprecedented way to bring about change not only in Ireland, but within its government, forever changing the image and expectations for the nation’s presidents. At the UN, she went to lands no High Commissioner had traveled to and was outspoken about various issues. Now, she’s recorded for us not only the tale of how she did it, but a story about how we can all be part of revolutionary change, too — and leave our communities and our world a better place.