Previously on Pretty Little Liars, Mona Vanderwaal was mercilessly assassinated by a blonde-headed person only seconds after fingering Ali as Big A. Spencer was arrested for murdering Bethany Young, the Radley patient who was fond of drawing pictures of Mrs. DiLaurentis getting eaten to death by lizardmen and who also was buried in that hole in the yard. You know the one. Toby got hit by a car on the way to the second day of Rosewood Police Academy, which also is the day of graduation from Rosewood Police Academy. Hanna read Emily’s boobs. Paige smooched Emily’s face. And the manger of Christ the Lord was emptied of Christ the Lord and filled with Mona the Vanderjesus.

It’s Christmastime in Rosewood, Pennsylvania, the one town in Pennsylvania where you can walk around outside in December in just a t-shirt and cardigan and not suffer even a nip of frostbite. Spencer is not feeling the holiday spirit because what she got from Santa Claus was money for bail. Hanna also is not particularly in the mood to celebrate because Mona is dead. Emily, no stranger to murdered girlfriends and being at least half-convinced she smashed in someone’s face with a shovel in Ali’s backyard on the Night of a Thousand Nights, suggests that everyone take a deep breath and make a wish on a snowflake. 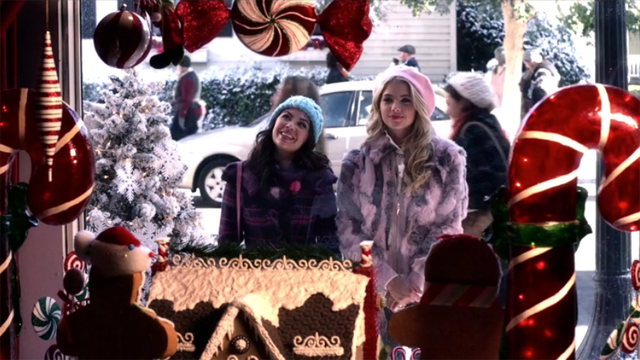 As long as I don’t get a cow brain in my stocking, I’ll be happy!

In front of a store window, Hanna flashes back to the glory days of Hannily, when the only thing Hanna and Mona had to worry about was how much pilfered swag they could fit in their purses at Bloomingdale’s and whether or not Ashley was going to walk in on them playing a two-person game of spin-the-bottle. Flashback Hanna is like, “I wish for Jimmy Choos” and Flashback Mona is like, “I will get those for you and literally anything else you want including the spleen of a living human being, if it will make you happy.” They laugh. They promise to be best friends forever, to always make the yuletide gay.

In real-time, the Liars sense a ripple in the Force. An alive black person catches their attention due to being alive and black in Rosewood. Spencer’s curiosity goes one step further than everyone else’s, obviously, and within seconds she has constructed a mental list of 100 reasons he is A deduced that he is a lawyer because he is writing with a fancy person’s pen. And she’s right. He is the lawyer of Mona Vanderwaal, who left instructions for him to to deliver a package to Hanna exactly 30 days after her death. The package contains a hand-drawn map of all of Ali’s hiding places in her house and a note that’s like, “Honey, if I can die, it truly is like what Arya Stark said: Anyone can be killed. Be careful and remember I love you.” 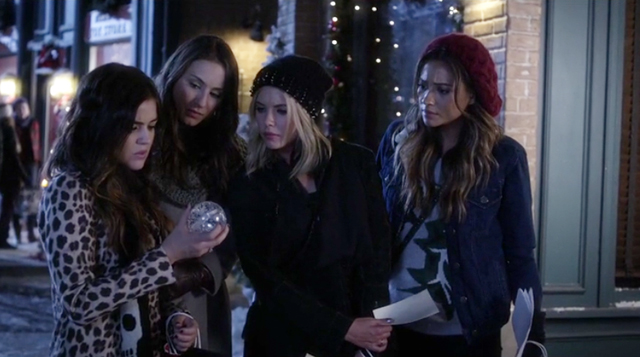 Santa walks by and Aria trades him a fiver for a snow globe. In the snow globe is a picture of all four Liars, and a note from A talking about: “Do you hear what I hear? Spoiler alert, it’s the sound of you being tortured to within an inch of your sanity. Ho ho ho!”

Ali is at home by herself, trying to sleep, but the sound of clanking chains and ghosts wailing in the walls is keeping her awake. Unlike most nights, though, the source of the dark magicks reveals itself, and it is Jessica DiLaurentis(!!!!). She goes, “She’s got a lot to show you, pay attention!” And then vanishes! Ali walks through the house, pausing to play a little holiday ditty on the piano, and then dozes off on the couch. She awakens with a start, exclaims, “My eyes have seen the glory of the coming of the Lord!” Because what her eyes are seeing is Mona Vanderwaal, fully embodying the Ghost of Christmas Cataclysm! 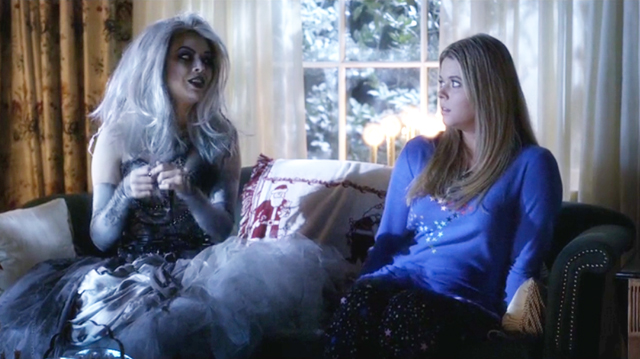 Ali: Nope. Nope, nope, nope.
Mona: Uh huh, honey.
Ali: Why are you dressed like some kind of Jem and the Holograms zombie tribute band?
Mona: Because, much like Mamaw Marin, I do what the fuck I want. Hey, look at little you, playing the piano. Shit’s about to get so for real, though.

Little Ali, who is playing “Silent Night” in a tragic bit of forever foreshadowing, hits a key that makes a weird sound, so she lifts the piano lid and finds a couple of wrapped packages inside. She opens them up and discovers matching dresses that look like the dresses those murdery twin girls wore in the second Halloween episode. Jessica comes rushing in, and Little Ali is like, “Dad’s gonna get a real kick out of the fact that y’all bought me the same present!” And Jessica goes, “The same present? There is only one dress here. You only found one dress. Do you want Daddy to abandon us? No, right? So you only found one dress.”

Little Ali nods and retells the story to her mom about the one dress, to make sure she’s got it just right, and Mona turns to real-time Ali, says, “And so anyway, that’s your superhero/villain origin story. Makes Bruce Wayne’s whole deal look kinda jolly, huh?” 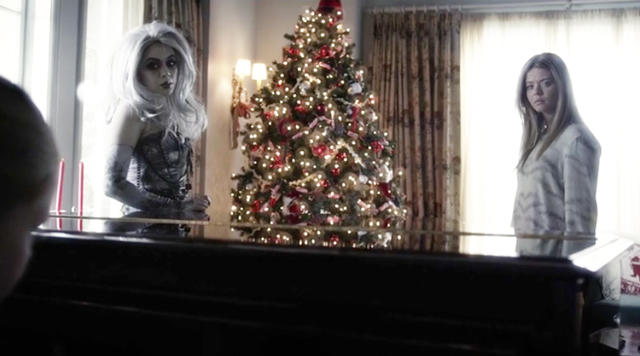 Identity has been a theme of Pretty Little Liars from the minute it hit the ground, which is why it’s always fun when the show goes all in with these balls-out Hitchcock homages. Like, most people think Hitchcock is scary because of shower stabbings and birds, and yeah, that part is true, but the actual terrifying thing Hitchcock did was ask really unnerving questions about the nature of identity.

Most of his movies, including Rear Window, are about people inventing or reinventing themselves. (Rear Window has the added bonus of other pretty little motifs like voyeurism and the male gaze and the line between sex and violence and the ethics of being an amateur detective.) Marnie is about this woman who is a kleptomaniac but has no sense of self outside of the fact that she’s vain and good at stealing shit. Scottie and Madeleine/Judy wander around Vertigo the whole time talking about how they don’t know who they are. North By Northwest is about an innocent guy who gets trapped in a mistaken identity situation where everyone else makes terrible decisions for him and he has no autonomy at all. Rear Window wonders what happens to someone when they can no longer do the thing they excelled at most in the world.

So the questions you come away with when you watch Hitchcock are like: Is identity fluid? Is it just a facade? Is who you are as easy as putting masks on top of masks? And if yes, does that mean that who you are, at your deepest place, is just an expanse of ephemeral nothingness? The idea that the youness if you is not rooted in something substantial and enduring is as horrific as the idea of just floating off by yourself into space.

Hanna dealt with this last year, in the most Hanna way possible, which was to: spiral for ten minutes, confront the ghost in the chair, and claw her way back to the top of the mountain to stand in the sunlight, knowing herself and the spiritual fullness of this life even better than she did before. But Mona and Ali are (and hopefully will continue to be!) locked in this battle about who made who, and who is wearing a mask and who is wearing a real face, and how much of their very selves is defined by the people who are standing next to them. Ali told Mona to put on her face every day before school, in that flashback to the lodge the night Mona rescued Ali and sent her away as Vivian Darkbloom, and on the surface that’s makeup and being pretty, right, but the second layer of that is straight up paper faces on parade. Which circles back around to: If you hide your face so the world will never find you, will you ever find yourself? 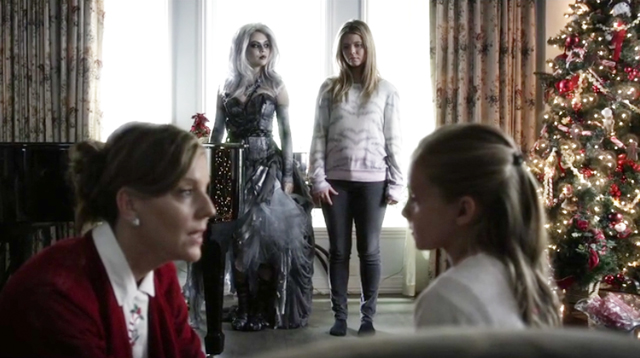 Okay, now let’s see if you can hold your breath for two full minutes!

This scene is one of the best this show has ever done, not just because it’s creepy as lumps watching Mrs. D brainwash a small child with threats of abandonment, and not just because Janel and Sasha play so good off each other, and not just because we finally get confirmation that Jessica has stashed away a small Ali-lookalike somewhere, but also because we’re getting to see with our own eyeballs the moment the sapling of Alison’s identity begins to split like an aging willow. And we get to witness it with Mona watching over her shoulder, looking like if Anna never went and rescued Elsa from the woods.