Toby is confined to his wheelchair with a cast and a camera, L.B. Jeffries-style, and while he and Spencer ramble off their plan to break into Ali’s house tonight and rifle through her possessions while the Ice Ball is going strong, Spencer changes into a Santa Claus outfit that seems to indicate that Obama’s War on Christmas is over and sexiness has won. Can you even imagine being Toby Cavanaugh? Getting to a place of such familiarity with Spencer Hastings that she steps out of the closet wearing this and you don’t even need smelling salts? What a life. 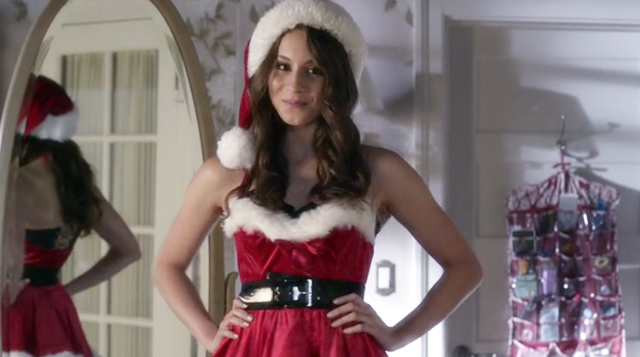 I’ve been an awfully good girl, Santa Spencer. (Hurry down the chimney tonight?)

Hanna and Caleb, dressed as matching elves, spread holiday cheer and hard truths at Pastor Ted’s church. Hanna chats to a deaf girl in sign language, then comes right out of the frame when she sees that this one Mean Girl in the crowd is Mean Girling the deaf girl, loud as a Rosewood pharmacist, and encouraging her friends to do the same because the deaf girl can’t hear them. Hanna calls them over and literally says the words “bitches get buried” to these like seven year old children, in church, at Christmas. It’s amazing. It’s perfect. It’s so Hanna. Caleb just stands there and nods, like, “Yep, bitches do get buried” to these small girls. The main Mean Girl acts like she is not scared, so Hanna just glares at her until the girl leaves in a huff. Her friends don’t go with her, though, because Hanna explains to them that when you follow an asshole kid like that around, someone’s going to end up getting their eyeballs poked out with a firecracker. 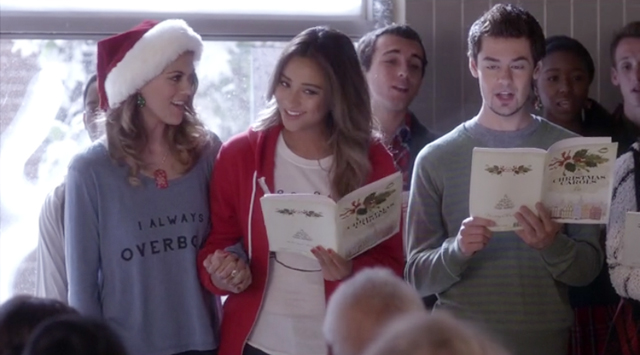 I’m dreaming of a scissor-filled Christmas.

At the Shady Pines retirement community, the whole gang gathers to sing carols for Rosewood High Class of 2013. Emily and Paige canoodle adorably and hold hands and snoozle their noses together like eskimo kisses. Paige is wearing a shirt that says “I Go Overboard,” which is like the Paige-est t-shirt in the cosmos. On the back, it’s probably like: #PennyFlavoredCupcakes #NeverForget. Jenna and Sydney are there, and so is Lucas. Ezra also, and this is a conversation he has with Aria:

Ezra: I bought you diamond earrings and a diamond necklace and a dress for the Ice Ball.
Aria: This is slightly more than the gesture we agreed to exchange.
Ezra: I came into several millions dollars when I sold my surveillance equipment back to the CIA.
Aria: I’ll bet your family bought you ponies for Christmas.
Ezra: Yeah, but I only asked for the one.

No, seriously. He says that. He says he only asked for one pony.

Paige is snipping at her mom on the phone about, “No, that’s what you want” and as soon as the words are out of her mouth, you know what’s happening is that her parents have finally decided to be the only parents in Rosewood that actually parent, and shuttle her out of this shitshow of a town. Emily, who has never seen a TV show before and continues to not be as desperate for Paige as I am, for reasons I will never understand, says “sounds like a fun vacation” when Paige says her parents want her to go to California after Christmas. Aria zooms by and points up at the mistletoe, and Paige and Emily kiss, and they still make my heart swell up like a reformed Grinch after all this time. 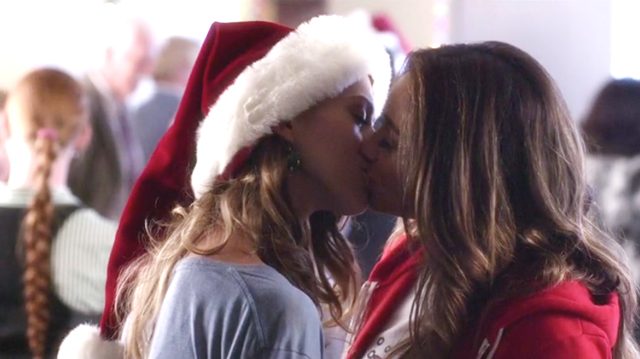 What a laugh it would have been if Maya would have risen from the grave and walked in wearing a mask of her own face and saw Emily kissing Paige Claus last night!

The Ice Ball is a big charity Christmas party that Alison is throwing to raise money for Homeless Teen Pilots probably, and everyone looks fly as hell, but Emily and Paige look it the most. Paige is wearing a white suit and Emily is wearing a dress that’s like what we’ve talked about before when costume designer Mandi Line must just give up on trying to make Shay Mitchell look like a regular teenage person and not an otherworldly goddess and is just like, “Fine.” And the result is why painters paint and singers sing and poets poet and Paige McCullers doesn’t give one single damn if living in this hellscape means her whole entire head is going to get set on fire one day while she is eaten alive by trained wolves. 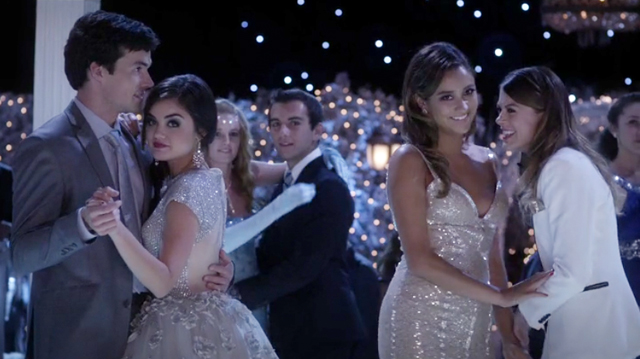 Last thing I remember is our beautiful bodies grinding up in the club, drunk in looooove.

Tiny Toby is Home Alone, so Spencer breaks from the gang to sit on Lucas Claus’ lap and tell him to be careful tonight because Ali potentially has a group of super-soldiers at her disposal. Then:

Ali makes a triumphant entrance with four new Liars in tow, all masked up, and the old Liars split up to complete Operation Vanderloot. It’s a terrible plan. Not even the splitting up part, which just Is What It Is at this point, but the part where Hanna and Spencer are going into Ali’s house to ferret out all her hidden trinkets. How do they not know by now that a map to Ali’s hidden trinkets isn’t like: here is a wall safe and here is the combination and viola! here are the documents we need to solve the mystery at hand.

No, it’s like, you go to the place marked on the map and chop through a wall and what you find is a disembodied doll hand, which reminds you of this thing Alison said one time that would have been useful to know back in the pilot episode but you have only just now decided to share it with the class, and that memory leads you to a different place where the claw-like fingers of the disembodied doll hand function as a key, and inside that hidey hole are the rest of the doll parts, and so you assemble the doll back together and finally notice there’s one doll missing from a nearby shelf, so you put it back in its place and when the sun comes through the window at 3:33 p.m., the light hits the reassembled doll in the eyes, and the eyes are actually mirrors, and the sunbeam pings around the room and lands on a crawlspace, and inside the crawlspace —a place you can only open by giving it a sacrifice of your own blood while standing on one leg and singing the lyrics to “Linger” by the Cranberries, backwards— is a child’s toy that looks like it’s from an abandoned circus from the 1800s and inside that toy is another, even creepier toy, and inside the even creepier toy is — YOU’LL NEVER KNOW! Because it took you so long to uncover the actual prize that someone in a hoodie found you and stabbed you in the kidneys with a cleaver!

So anyway, Hanna and Spencer scamper off to do that while the Liars and their partners spread out across the five square-mile auditorium where this dance is being held and creep on Ali. 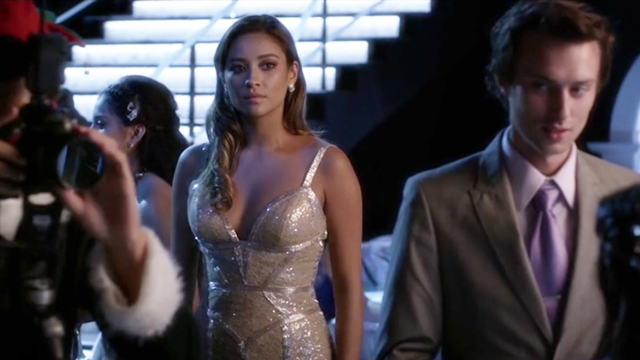 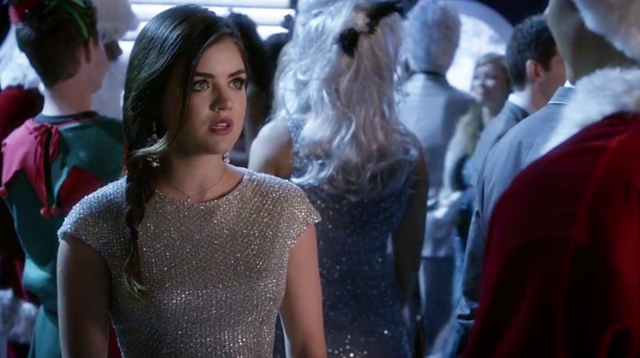 Is that real yeti fur on your hat?! GIVE ME IT.

Holbrook: I’m a skeeze now like every other male authority figure in this town, so I’m going to wear this shit, call you naughty, and say Ezra’s name in a way that’s grosser than anything anyone has ever said to you.
Aria: Bitches get buried, is what I have heard.
Holbrook: Not me, though! I am a man with power!
Aria: Tell it to Wilden. Tell it to Garrett. Tell it to Cousin Nate.
Holbrook: See you around, little girl.
Aria: ACT NORMAL, BITCH! 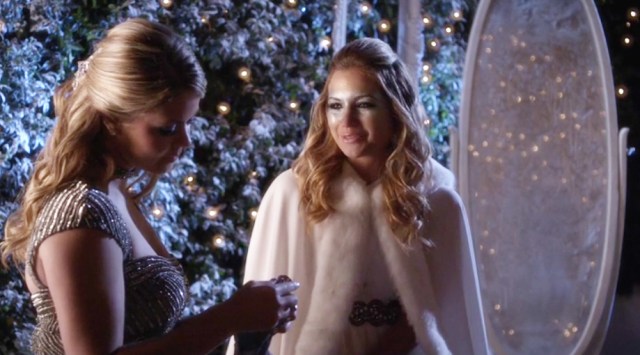 Ali: Thank you for coming to visit me in the town where you murdered an officer of the law.
Cece: Girl, I brought you some perfume too.
Ali: I’ve been seeing a lot of ghosts, literal ones.
Cece: The first Christmas after losing someone is the toughest.
Ali: Probably not as tough as the last three Christmases I spent gnawing meat off old chicken bones from the trash can at the Greyhound bus station, but I get your point.
Cece: I love me. I mean you. I love you. And me, who is you, and you who are me.
Ali: Merry Christmas, soul sister. Again, I mean that literally.

Heather has written 1222 articles for us.