Hahahah! That’s so funny! You know, ’cause in this photo she has long blonde hair and is so PRETTY like a WOMAN and now she’s this scary butch lesbian with short hair and glasses and Opinions and who the hell would ever want to tap THAT? I mean, besides everyone and all of us here. But isn’t it so super-special that once upon a time, Rachel Maddow was still you know attractive by heteronormative patriarchal standards of beauty? I’d tap that! Hahaha!

Considering how completely 100% appropriate that feeling is, I’m surprised someone had the self-awareness to change the Buzzfeed post’s headline, which was originally “Maddow’s Smokin’ Hot Yearbook Pic” [screenshot below] to “Rachel Maddow’s Yearbook Picture.” 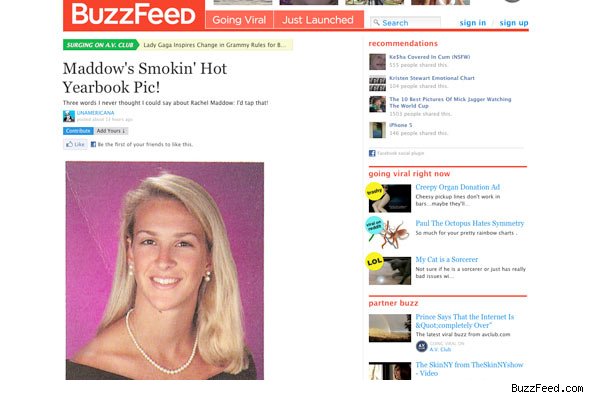 But the seemingly popularly accepted implications of the Buzzfeed post were just the beginning!

Tucker Carlson’s The Daily Caller teased our liberal instincts by asking his audience “Will Media Matters get madder than usual if I say she was very lovely?” And though internet commenters are a faulty gauge from which to extract a thesis, we’re gonna have to do that this time, ’cause Tucker is intentionally putting the burden on his readers to fill in the blanks, and they do: “What would possess her to give that up to look like a man?” “I can still see the adams apple.” Et cetera. Because, see, in February, Jezebel reported: “Tucker Carlson‘s Daily Caller website has made a habit lately of calling Rachel Maddow “a man.” The site also maintains that this is not at all offensive. We’re not buying it.” And yes, it’s irrelevant that Rachel has made similar remarks about herself; just like you can’t talk shit about my Mom and like how it’s important to distinguish the weight of language from the oppressor/power-class vs. the oppressed.

The reaction to Rachel Maddow’s yearbook photo hit an all-time low when Senator David Vitter made some fantastic remarks on a Louisiana morning radio show about how crazy bizarre it is that Rachel Maddow ever passed for AN ACTUAL FEMALE:

MALE HOST: I wonder if Senator Vitter is ever going to post, like, maybe the video of the first time he was on the floor of the Senate. If I have to show the way I looked the first time I was on TV, you should do that too.
VITTER: We should go further back than that, how about high school yearbook?
MALE HOST: Oh yeah.
VITTER: De La Salle marching band.
MALE HOST: That’d be cool. Well you know, with Rachel Maddow they had that picture of her…
FEMALE HOST: Looking like a woman.
MALE HOST: Yeah it was really bizarre.
VITTER: [LAUGHS]: Must have been a long time ago.
ALL THREE: [HEAVY LAUGHTER]

Everyone freaked out and Vitter has since issued this post-it note sized apology letter:

Regarding my remark during a radio conversation today, I apologize.

The hosts made their comment and I obviously chimed in. While we do not usually agree on the issues, I do not think you deserved that comment.

The scariest part of this for all those David Vitters and Tucker Carlsons out there? Rachel Maddow probably really couldn’t care less what you think of her physical appearance. She likely does not give a flying f*ck, but perhaps she, like us, might be more preoccupied with what this means on a macro level. 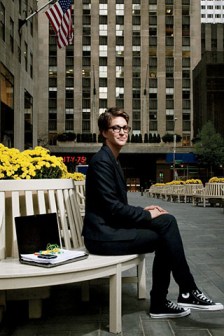 To queers, Rachel Maddow’s photo might inspire a knowing smile or empathetic LOL. But amongst a certain kind of Conservative Human, it’s inspired something else altogether: another chance to demonstrate their fundamental unease surrounding female masculinity by praising how “hot” Rachel could be if only she returned to pearls & a blowout. Judith Halberstam, in her book Female Masculinity, writes:

“The exclusion of butch women signals a widespread cultural anxiety about the potential effects of femaleness and masculinity. Presumably, female masculinity threatens the institution of motherhood: I suppose people think that if female masculinity is widely approved, then nobody will want to take responsibility for the trials and pains of reproduction.”

The panic over a potential shift in our present gender paradigm underlies most homophobia these days, ’cause lawd knows what hell will break loose if women ever stop caring whether or not men could find them tappable.

Furthermore, this kind of discrimination goes largely unchecked: Perez Hilton calls Cynthia Nixon‘s girlfriend “Our Favorite Hobbit” and Lindsay Lohan‘s ex-girlfriend “SaMANtha Ronson” and yet many of you still visit his website. Back in ’08, Evil Beet Gossip snarkily remarked, “I’d make some joke about how [Christine Marinoni] looks like a man, anyway, but that’s not true: she looks like an awkward 14-year-old boy” in an article entitled Cynthia Nixon Still in Love With World’s Ugliest Woman. A few months back the entire media collectively gasped to see Angelina Jolie was letting Shiloh dress how she wanted to — in her kickass unique tomboy style. In fact, Life & Style magazine splashed WHY IS ANGELINA TURNING SHILOH INTO A BOY?!! on its front cover. 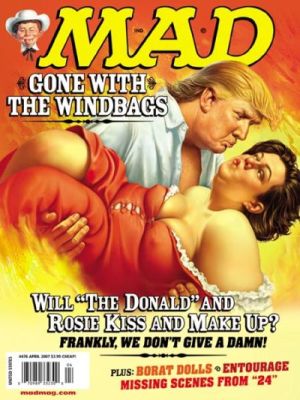 Or maybe you remember 2006, when Donald Trump volleyed one homophobic insult after another at Rosie O’Donnell, suggesting Rosie’s then-wife Kelli Carpenter would be happier with one of his cronies than with Big Bad Manly Ro:

In her September 2002 piece for AfterEllen.com, Rosie O’Donnell and the Tabloids, then-editor Sarah Warn reflected on how drastically tabloid coverage of Rosie’s life had shifted following her coming out:

The news coverage of O’Donnell’s haircut has been one of the most troubling issues, since it demonstrates the homophobia and sexism still lurking beneath the surface of many supposedly objective publications… Words like “radical,” “masculine,” and “drastic” [employed by a National Enquirer article titled “Rosie Loses Her Family”] are all designed to invoke disgust, fear, and dismay over O’Donnell’s defiance of traditional feminine norms. Never mind that her current look actually resembles most forty-something suburban American housewives.

Even the presumably politically correct Oprah devoted a show to the question; “If Lesbians Like Women, Why Do They Date Women Who Don’t Look Like Women?” LAST YEAR. Seriously. Raise your hand if anyone’s ever asked you that question. I bet if a low-flying airplane entered your mutual stratosphere you’d all be handless right now amirite?

Unfortunately Oprah didn’t invite Julie Goldman onto her show, where she could’ve told Oprah what she told The Village Voice, “Being butch doesn’t mean you want to be a man. You’re a woman—you’re just a butch woman. Butch indicates a playfulness with gender, and that’s just fucking cool.”

But this gender-bending still comes at a cost, especially when it’s not the androgynous malnourished sultry #youlookveryshanetoday kind. Studies have shown that “butch”/non-femme-presenting women, by defying traditional heterosexual and gender roles, experience more discrimination based on both sexual orientation and gender expression. The fact that women still choose a masculine presentation is part of what makes masculine women so f*cking sexy: it’s BRAVE. They’re dykes and they don’t care who knows it, transgressing the gender binary regardless of potentially negative reactions from mainstream society.

In The Girls Next Door: Into the Heart of Lesbian America, Lindsy Van Gelder and Pamela Brandt challenge the “Orwellian” “dissing” of women who forego traditionally feminine-associated beauty rituals:

“One of the lesbian qualities that apparently seems strangest to the rest of the world is that we don’t all dress to please men. Even stranger—since the measure of women’s attractiveness in our culture is attractiveness to men—some of us are actively drawn to women who don’t bother to meet that standard of beauty…”

On “lesbian taste” in general:

if we had to make one other generalization about lesbian taste, it would be that a lot of us are powerfully attracted to women, gay or straight, beautiful or not, who look as if they can take care of themselves.”

You know, a woman like Rachel Maddow: fully & unapologetically authentic and unequivocally successful entirely on her own terms. Rachel Maddow doesn’t give a shit if you find her ‘tappable.’ Maddow told The Voice: “I’m not Anchorbabe, and I’m never going to be. My goal is to do the physical appearance stuff in such a way that it is not comment-worthy.”

I know that scares the living shit out of you, patriarchy, because if more women break free of the tight, predictable boxes and define success on their own terms, regardless of your assessment of their gender presentation, something really crazy might happen! You know, like a world in which you, too, might have the opportunity to notice that, regardless of her haircut or costume or gender presentation, Rachel Maddow always has been, and always will be, smokin’ hot.