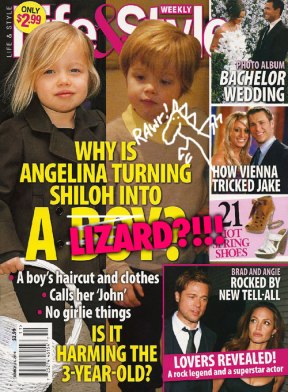 GENDER:
Hey-o! We asked you on Wednesday afternoon if this cover of Life & Style officially crossed the line from “pisses us off” into “should piss everyone off.” After all, a lot of things piss us off, we are angry militant lesbians after all, didn’t you see SVU last night? Well, as we discovered 24 hours later, we’re right, it’s official! You heard it here first (because we have our finger on the pulse of cute tomboy sneakers), this shit is offensive.

Here’s the thing though… the ‘good people’ at ‘Life & Style’ still apparently has their heads up their Summers-Eved asses (btw that shit gives you yeast infections, ladies), as this is the statement they released to The Advocate: 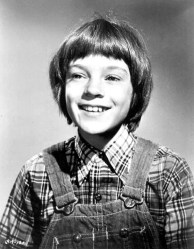 REALLY? Adam Lambert could eat a hamburger with his Mom and it would be a bigger entertainment news story. Why? Because he’s an adult, and an entertainer!

But ‘cmon. I don’t have to say it, do I? Take it away, reader. Tell us what’s wrong with that statement from Life & Style.

And, big up to the National Center for Transgender Equality, in a statement to The Advocate:

“The length of Shiloh’s hair or the clothes she wears are really matters for her and her parents to decide; this is a family that is known for their fashion. What’s important here is that every child, including Shiloh, has the opportunity to express herself and explore her world in a way that is safe and nurturing for her. Our society needs healthy, well-rounded children whose interests and tastes are as diverse as the children themselves and are not limited by outdated stereotypes of gender. Shiloh — and all other children — deserve the right to be themselves in ways that feel right to them as they learn and grow.”

ETA 4PM FRIDAY: The stylist quoted in the article is pissed/hurt/upset, and has written this letter to Jezebel, which essentially cements that Life & Style was lying about getting opinions from all sides. You can read the whole thing at Jezebel, here’s bits:

My career has been all about personal expression through clothing, and I am the biggest believer that any person should wear anything they choose, regardless of age or sex.

The quote I did provide to Life & Style actually praised Shiloh’s parents for letting her be who she wants to be, and included that she has two cool older brothers who she is probably trying to emulate, and that she looks up to, and that there is NOTHING at all wrong with it … quite the opposite. I was hoping it would influence other parents to let their children do the same.

Again, I am sorry that my words were misinterpreted, and please be assured that I would never say anything bad about any person, especially a child.

Really, I am in tears right now because this just makes me sick. In the past, L&S have often used me for style quotes, and they always give me final approval, so I trusted them for this piece, mistakenly. The actual quote began with “Some might think …” but they conveniently took that out to make it seem the thought was my own, and did not contact me for that final approval.

BETTER TOGETHER:
Living Together : Good Idea or Bad Idea? (@good)

FEMINISM:
Feminism is stronger than Glenn Beck’s slurs: “Words matter—in part because it is possible to change their meaning over time. (Think Dukakis and liberal.) But don’t take my word for it. Look at what’s happened to the word “feminist.” It’s gone from meaning a person who wants equality for men and women in all arenas to a code word for loveless, man-hating hags, as in Rush Limbaugh’s statement that “feminism was established to allow unattractive women easier access to the mainstream.” (@newsweek)

TRANS:
France no longer considers transsexualism to be a mental illness, making it the first country in the world to remove it from its list of mental disorders – a major victory when it comes to acceptance of this oft misunderstood condition. But the change does not yet advance legal status or medical rights for trans people. (@time)

OH CANADA:
Should O Canada Become More Gender Neutral? “I mean no disrespect for those who feel strongly on this issue but for heaven’s sake, we’ve got some very important challenges and every time the government is asked to do something real, it does something symbolic.” (@womanist musings)

GAY PROM:
Everyone ready for a new round of lesbian student banned from bringing girlfriend to prom reports? (@queerty)

LESBIAN COMMERCIAL:
This lesbian Hyundai commercial that ran during the Olympics equates gay flirting with intelligence (the tagline: “Smart Is In” except it was restricted to Canada because Americans are scared of hot women who don’t need men.