Orange is the New Black Season Four is just around the riverbend, y’all, and we’ve got brand new pics to prove it. Yup, that’s right. Photographic evidence of actors and actresses reading lines and performing scenes on the set of “Orange is the New Black.” You weren’t expecting this when you woke up in the morning. Listen, I wasn’t either. I got an e-mail this morning from Netflix and I was like WOAH what’s next, Netflix? Season Two of The Great British Bake-Off? Life is full of surprises like this. One day you wake up and you’re 34! Another day — like this day, for example — you sit down and suddenly there is a new picture of Poussey for you to admire.

Because I am a psychic, I am pretty sure I already know what’s happening in all of these photographs. Let’s start with the first photograph. Suzanne is going to say something too loud and Taystee is gonna be like, “don’t say that too loud around here.” 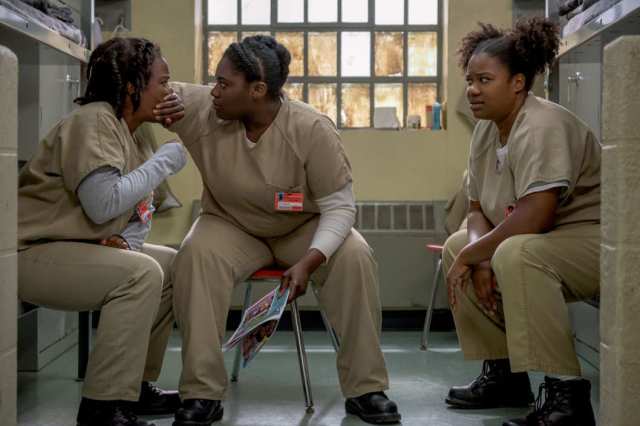 Big Boo and Pennsatucky are gonna scope out a new inmate and talk to each other about that inmate in hushed tones. 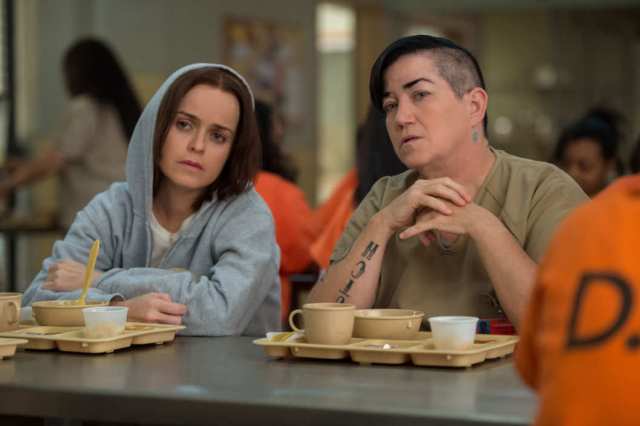 Everybody is going to get in trouble for something at the same time. 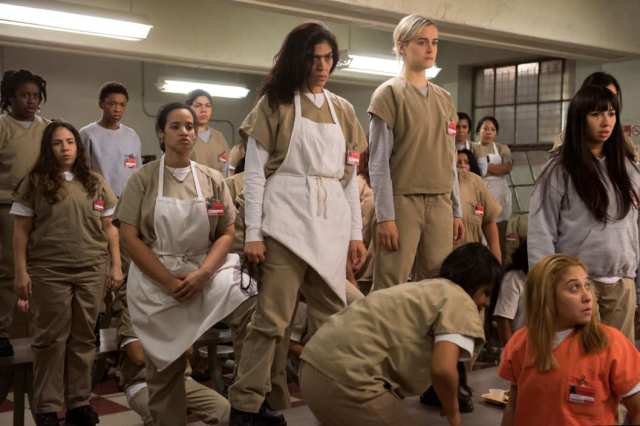 Okay — Jacob, Leah, and Rachel, I need you on the left side of the platform and the brothers need to come in behind on GO GO GO GO JOSEPH and then Joseph you’ll have to come out — without the coat —

The lady-prisoners are gonna pull some Wentworth-type shit against Piper. You know what I’m talking about. THAT MASSIVE LINENS IRON. That was intense. I accidentally put my fingers directly onto a hot stove about 4-5 times a year and still, my hands hurt just thinking about it. 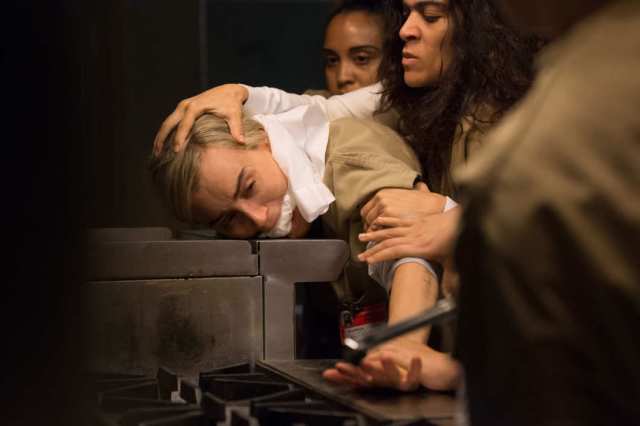 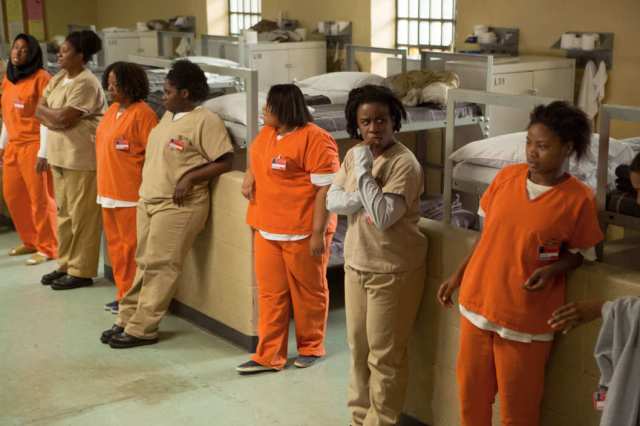 Am I the only one who smells that…?

Sophia will lean forlornly against a door, either arbitrarily or because the source of her forlornish feelings are on the other side of the door. Seriously, stop making terrible shit happen to Sophia, show. Just stop. 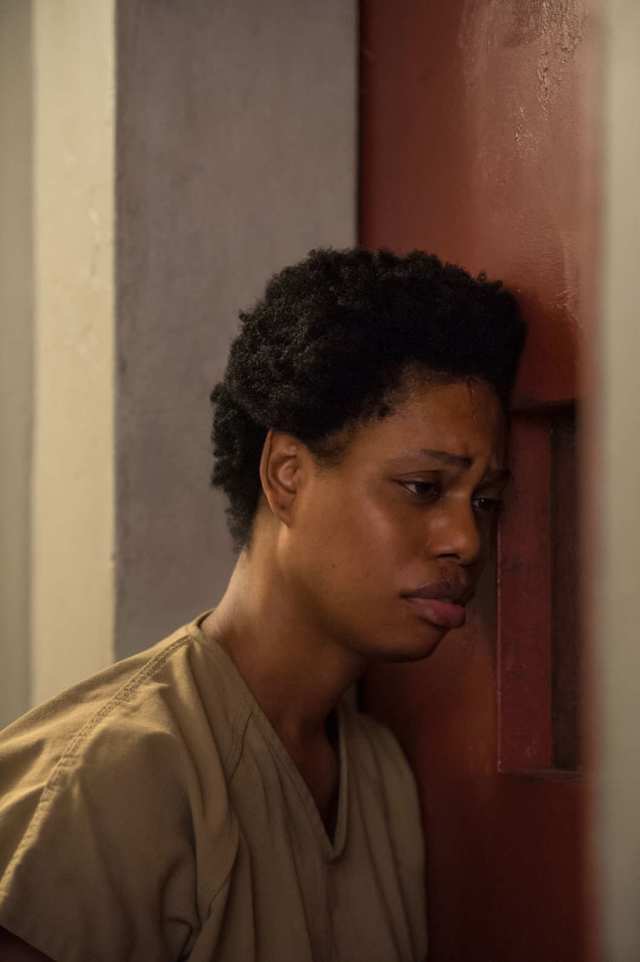 Really? No romantic storyline in season four, either?

Poussey is gonna be really happy about something! Ain’t that a relief. Also, an actress who looks like she could play Norma if the actress who plays Norma wanted to leave the show (like how they changed the actress who played Becky on Roseanne, you know what I’m talking about) will come on the show, but don’t worry, she’s not replacing Norma. 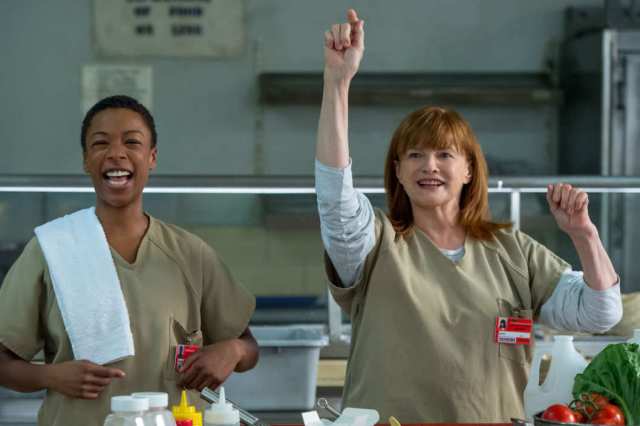 Heh heh look who’s got all the condiments and Kale now, bitches

Alex Vause is coming back, which means I was right that she didn’t belong on the Dead Lesbians list. Probably she killed that guy with a plant. Now she’s back at Litchfield, thinking about finger-banging, removing her glasses and putting them back on again, running her fingers intensely through her hair, and constantly emanating the aura of somebody one second away from a complete nervous breakdown. But sexy! In this photo she is probably looking at a chicken or some other wildlife creature. 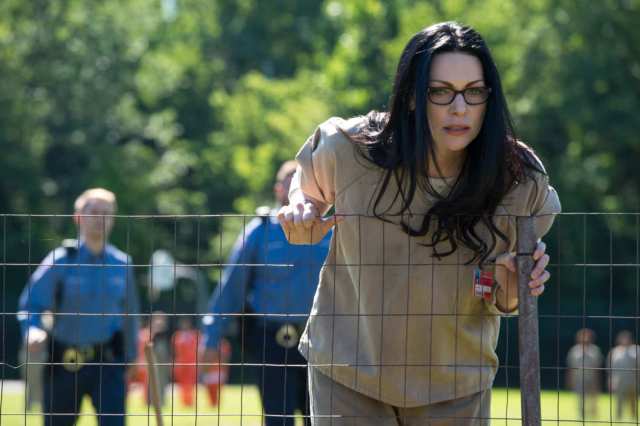 Damn, that arugula is coming in REAL NICE

Well I’m glad we all had a moment to look at these photographs together and think about our future. What snacks will we eat while we watch Season Four? Is 2AM your cut-off time for going to bed and picking it back up in the morning? Do you feel like it should be a national holiday? I do.

Join A+
Related:Orange is the New Black - Lesbian & Queer Storylines