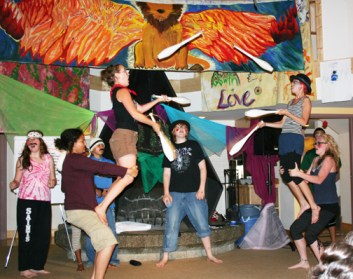 Power of Hope was different from Camp Fire or YMCA camp. It was a week-long art camp that attracted nerds, weirdos, and queers. Instead of gluing pipe cleaners onto Dixie cups, we had drum circles. Instead of hiking, we had belly dancing classes. We exuberantly created, painting murals with fern fronds and playing each other’s musical instruments. I loved it because the adults trusted us to make our own decisions instead of forcing us into group activities.

This was my third year at Power of Hope. I was seventeen years old. I had been out as bisexual for about 6 months. My relationship with my boyfriend was falling apart, although I didn’t really want to admit that yet.

Many of the usual suspects were there that year – the Rastafarian drum teacher, my mother’s colleague Charlie who had helped found the camp, the group that drove up from inner-city Oakland every year, the local islanders who didn’t have much else to do. There were also new faces – lots of other kids from the Seattle area, plus a group from an LGBT youth center in Portland.

There was one person from Portland in particular who caught my eye – a short, shy young man who wore a baseball cap pulled down over his eyes. He kept to himself, sitting in corners and sketching. Folks around me whispered rumors that he “wasn’t always a boy.” And I’m not going to lie – I thought he was abso-fucking-lutely gorgeous.

I don’t remember the names of most of the people I met that week. Except for his: Tuck.

One day we were sitting around, me and the other queers (both from Portland and from the general camp population) talking about our experiences. For me, coming out had been relatively easy – even the friends I pissed off were more angry that I had cheated on my boyfriend than that I had done so with a girl. But things weren’t so rosy for some of these other kids.

“I haven’t told my mom. I’m afraid she’ll kick me out of the house.”
“My dad thinks it’s a phase. He keeps asking me why I don’t have a girlfriend yet.”
“My friends at school… they don’t know because I think they’ll kick my ass.”
Then Tuck spoke up, his voice quiet. “My mother doesn’t believe that I’m a boy.”

I didn’t know what to say to that. No one knew.

He continued. “She told me that I need to start acting like a girl, and if I don’t… I’m out of the house.” He looked away for a second, then back to his sketchbook. Someone cleared the silence. “That’s fucked.”

We all agreed that it was, indeed, fucked.

“You shouldn’t let her bring you down,” I said. “You’re awesome.”
Tuck smiled his small, shy smile. “Thanks.” But there was still pain behind his eyes.

As the days went by, Tuck and I became close, by which I mean that I did everything I could to be close to him. I admired his sketches, which really were very good. We even walked hand in hand sometimes, which gave my heart a thrill. I knew I had a boyfriend back home, and that I had already betrayed his trust once, but he felt so far away.

“I’m sure your mom will see the light,” I said to him. “Parents are supposed to love their children.”

He sighed. “I don’t think so, D.C. You’ve never seen the way she looks at me. In her mind, I should be wearing skirts and gossiping about boys, not binding my chest and lusting after girls.”

I didn’t have any words that could make that better, as much as I wanted to. 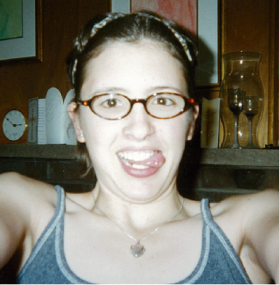 I didn’t have words back then for the experience that I was having. Now I can say that it was one of the first times I ever confronted my own privilege. Power of Hope was excellent for that – talking to my friends from Oakland about their experiences with siblings and friends joining gangs and getting hooked on drugs and getting shot were as far from my white middle-class suburban life as one could get.

But listening to Tuck tell his story made me aware of an entirely different kind of privilege that I have – the privilege of being raised in a liberal household. My parents had gay friends that they introduced us to without shame. While my schoolmates and sometimes even teachers passed around misinformation about what it meant to be gay, I could think back to people who I knew. Never once did I have to fear that my parents would kick me off the street and stop loving me for who I was. When I came out to my mother, the first thing she said was, “Did you think I didn’t know that already?”

But that didn’t exist for my new friends, especially not for Tuck. As hard as I found it to be newly out in a world that didn’t think much of queer people, I had so much more than they did.

As camp drew to a close, we exchanged addresses. Tuck didn’t have an email address, so he gave me his mother’s address. When I got home, I wrote him a long, thoughtful letter telling him how glad I was that we had met and how happy I would be if we could keep up a correspondence.

After a couple weeks, the letter arrived back in my mailbox with this scrawled on the front: “No one by that name at this address. Return to sender.”

It’s been twelve years, and I still think about him. Not in a romantic way – I have a wife – but I do worry about what happened to him. Did his mom ever come around? Did he escape to his dad’s place or to a shelter, or was he unceremoniously dumped on the street like so many are? Was he able to find help and support, or did he end up as one of Portland’s many homeless youth? Is he okay today? Is he a statistic?