I hope you’re ready to say farewell to 2011 because we sure as hell are! Also it’s gonna happen whether you like it or not, so really that opening sentence only served to illustrate just how inordinately excited we are about 2012. 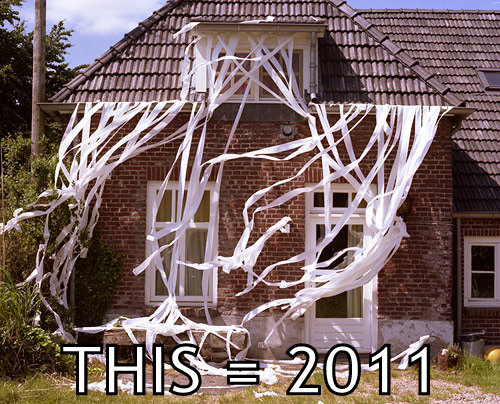 Are you all dressed up in ribbons and bow ties? Are your shoes fancy? I bet your shoes are fucking fancy. Even if they aren’t, NICE WORK. I’ve never loved you more. Hey, how do you feel about New Year’s resolutions? We made some last year, but I really don’t know who stuck to what. This year we don’t wanna make a resolution — we wanna make a REVOLUTION — and we’re getting started by leaving a bunch of crap that we don’t need in 2011. It seemed like promising not to take something with us to 2012 would be a lot more concrete than promising to change something about ourselves once we got there, you know? 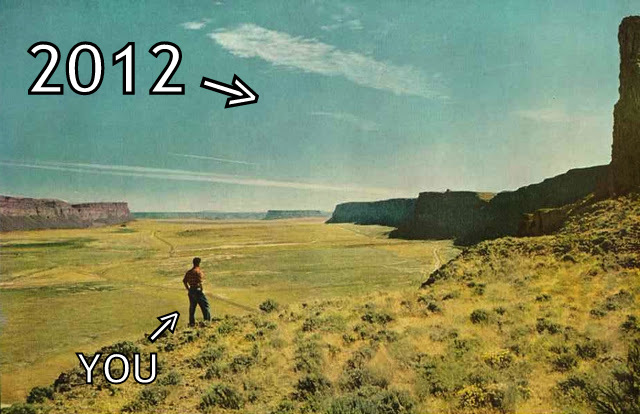 AH BREATHE IN THE POSSIBILITIES

+ Eating things that are not Thai food.
+ Desire to wear plaid everyday.
+ Negative / guilty feelings about being gay and that I somehow fucked up my family.
+ Feeling unloved and unsupported.
+ Doubts about applying to / attending graduate school.

+ Teenage angst.
+ My inability to wear a suit.

+ Waking up after 9am.
+ Pants that sag halfway down my bum.
+ Being too scared or lazy to take risks.

+ Unemployment.
+ The feeling that I’m not good enough.
+ And also health insurance, unfortunately.

+ My Darth Vader Adidas.
+ Text messaging.
+ Unnecessary trips to Costco.
+ Fear of letting people get to know me.
+ Emotional investment in the tv show ‘Castle’.

+ Perfectionism plus procrastination.
+ Indecision! …I think.
+ Some very cool handmade fingerless gloves. (Really, I lost these sometime in November, but I’m trying to reframe it more positively now.) Fuck those gloves!

+ Having 5+ tabs open in Chrome at the same time
+ Any thoughts about the size/shape/composition of my abdominals
+ Paranoia about people judging me for thinking I deserve to make a living doing this
+ 58 unpublished wordpress drafts
+ Feeling like a loser because instead of going out to interact with people during my “free time” (I left “not letting myself do anything other than autostraddle all the time” behind in 2010) that I’d rather just stay home with my girlfriend or stay home alone doing weird me things like arts & crafts, trivia games, and looking at photos on tumblr

+ Dep hair gel.
+ Carrying someone else’s substance abuse.
+ Wearing period panties when I’m not on my period.
+ Not returning people’s phone calls or texts due to acute technological response anxiety (I made that term up and now it’s totally a thing).
+ Jay-Z.

+ My OkCupid account (deactivated October 2011).
+ My addiction to pop (soda/soft drink for those of you not from the Upper Midwest) and canned ice tea.
+ Procrastinating on important things.
+ Worrying obsessively about stupid things.
+ Personal investments in Facebook political debates and Glee storylines.

+ Jeans with holes in the crotch.
+ Apology with no follow-through.
+ Not getting this fucking toilet fixed.
+ Sleeping past noon on the regular.
+ Shower grime.
+ Taking the bus the wrong way seemingly every time.
+ Paranoia about taking the bus the wrong way every time.
+ Bras that don’t fit.
+ Cutting my hair when I’m drunk.
+ Hangovers (except my New Years Day hangover, obvs).
+ Falling asleep in my clothes.
+ Animals in the walls of my home.
+ No money all the time.
+ Losing my keys.

+ That annoying habit of immediately beginning to stress about the next thing I “should” be doing instead of appreciating my accomplishments.