The new adaptation of Stieg Larsson’s “The Girl With The Dragon Tattoo” is visually stunning, well-adapted, and very entertaining. But without Noomi Rapace, how good can it be? (Spoiler warning!)

I suspect that those who haven’t seen the Swedish version of “The Girl With The Dragon Tattoo” will enjoy this new adaptation far more than those who have. This new movie had a lot going for it. The soundtrack is excellent, and it should be — according to CBS News, it took Nine Inch Nails founder Trent Reznor and producer-musician Atticus Ross fourteen months to create (though bizarrely, the villian plays Enya when he is about to torture Blomkvist). The intro sequence, shot in a style that will seem very familiar to Bond fans, betrays the high production values, as does the stunning visual composition (which at times mirrors shots from original film, but is far more slick). Though not as complex as the book, for obvious reasons, director David Fincher reveals and unravels the mystery with skill.

Daniel Craig made a convincing Blomkvist, far more so than Michael Nyqvist, mostly because Craig is actually charming and therefore much better-suited to the role of charismatic journalist, and partly because anyone who walks around with his glasses hanging off of one ear deserves a bit of applause.(Also, Young Henrik was played by Julian Sands, who played Jenny’s douchey professor in The L Word. He is still weird.)

Unlike the Swedish adaptation, which takes for granted that viewers will know what is going on and spares little time for explanations, Fincher’s film does a better job of smoothing over narrative gaps, explaining events, and giving background. The result is more cohesive, and of course longer, though dedicated fans will be annoyed by departures from the books for the sake of brevity. Harriet herself also appears much earlier in the film, and at the end, placing her in London instead of Australia also makes for a nicely wrapped-up explanation without actually having to verbally explain everything she’s been up to in the past few decades. Having Blomkvist interview a disguised Harriet about herself at one point is also a nice touch.

With better production values, a more fluid plot, and several more believable characters, the American adaptation of “The Girl With The Dragon Tattoo” should be a definite improvement on the Swedish one. But it isn’t. With everything else aside, the main difference between the two is this: in the Swedish film, Lisbeth Salander is angry, purposeful, and smoldering. In the American film, she is fragile, alienated, and, at times, apologetic.

In the Swedish movie, the first time we see Salander, she is at work following Blomkvist. The first time we hear about her, her boss at Milton Security, Armansky, describes her as “a special little girl,” a description that doesn’t fit with what she has already done, and that really doesn’t fit her, even though people insist on using it throughout the film. It certainly doesn’t fit the person who, two seconds later, walks through the door and seems to scare the crap out of everyone just by drinking her coffee.

In the American movie, we hear about Salander before she ever appears on the screen. Armansky and  Dirch Frode are talking about her. Armansky says, “No one here likes her. […] She’s different.” “In what way?” “In every way.” While the dialogue is less overtly infantilizing, the looks the men exchange when she walks in and sits down are not. She does seem different, or at least out of place. But she isn’t scaring anyone. She just isn’t badass enough.

Being not-badass, in and of itself, is not necessarily a bad thing. Rooney Mara is a strong actress and excels in her role, and for viewers who haven’t seen the Swedish adaptation, that is probably enough. In an interview on CTV.ca, Fincher describes Salander as “a damaged wraith, a little crow,” and recalls telling Mara: “I cast you in another movie to be warm and feminine and verbal and mature, and I don’t need any of that. I want the antithesis of that.” And he got it. But something is missing from the remake, and that something is Noomi Rapace’s Salander, or even Larsson’s Salander, and her intensity.

At one point, for instance, there is a dead cat. In the book, Salander says, “when I find the motherfucker who tortured an innocent cat to death just to send us a warning, I’m going to clobber him with a baseball bat.” You could believe Rapace doing that. You couldn’t believe Mara.

It’s weird that Rapace in her skinny jeans and choppy haircut looks tougher than Mara in her baggy pants and mohawk. And gayer. Rapace’s Salander gives off queer girl vibes from a mile away. Mara’s Salander does the same, but — even picking up Mimi in a lesbian bar and waking up with her the next morning — it seems much more muted. 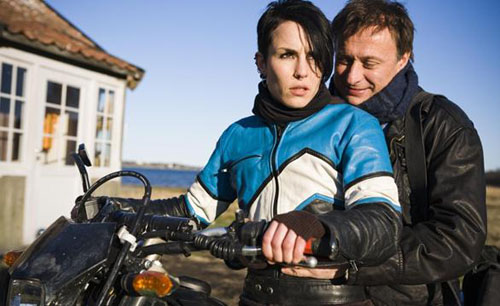 A lot more time is also dedicated to her relationship with Blomkvist. In the Swedish film, Salander takes control and keeps it, while in this one, he takes control almost immediately, and she becomes much softer and accessible as of the next morning. She also gives up her secret — of being considered legally incompetent — much more easily (she doesn’t tell him in either the books or in the first Swedish movie). In contrast, in the book she says she is probably the best hacker in Sweden, which she does not mention in the movie. In the book and in the Swedish film, more time is dedicated to her abilities and to the things she can do, while in Fincher’s adaptation, there is a lot more focus on the things she can’t.

The books themselves have a weird mix of feminism and anti-feminism — on one hand, there is a kick-ass Bechdel-test-passing female character, and on the other, there is a lot of misogyny and a lot of female corpses. The Swedish adaptation seems to say, “Here’s this kickass lady who horrible things have happened to, let’s see what she can do.” The American adaptation seems to say, “I am a mystery movie!”

This is probably a good way to spend three hours. However, if you have been referring to Noomi Rapace’s Salander as your fake girlfriend (what?), you are probably not going to change your mind.

Join A+
Related:the girl with the dragon tattoo