Maggie Gallagher has officially stepped down from her position as Board Chair of the National Organization for Marriage. As she explains in her statement, she has a lot of important projects to work on in the meantime:

“I will remain on the NOM board, and continue to work on specific projects for NOM, as well as taking on some additional outside projects I’ve long deferred, such as finishing my book Debating Same-Sex Marriage¸ which I’ve been working on for Oxford University Press with Prof. John Corvino,” Gallagher added.

Apparently Maggie really saw herself as NOM’s progenitor, and now that it’s off and running she can step back and watch her baby grow up. From the Advocate:

“My original intention in co-founding the National Organization for Marriage was to launch a politically sophisticated national activist organization to fight for the views of millions of Americans who believe that marriage is and should remain the union of husband and wife,” she said in a statement. “I think it’s fair to say that NOM has been launched, and is now far more successful than even I dreamed (and I dreamed big!).” 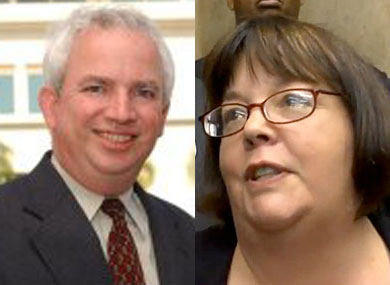 IMAGE VIA THE ADVOCATE

Maggie Gallagher has not necessarily accomplished a lot during her time as NOM’s chair, but she has irritated us approximately infinity times. She tried to stop gay marriage from happening in NY even after it was legalized. She was the star witness of this bizarre “hearing” on the evils of gay marriage perpetuated by Rep. Trent Franks. She and her organization have said a lot of really mean things.   She’s misrepresented a lot of false information about gay people as being the truth. Her organization’s most recent substantial achievement is getting all three of the major Republican candidates for president to sign a pledge regarding gay marriage and their distaste for it. Without her, will we see a change for the better?

Probably not. Her replacement will be a man named Dr. John Eastman, who is similar to Maggie Gallagher in that he thinks gay people are a menace to society and that their marriage somehow ensure that his children will never really know happiness or security. He is slightly dissimilar to Maggie Gallagher in that he has a strong law background, having been Dean of Chapman University Law School and “has participated in over 50 cases in our nation’s highest courts,” according to NOM’s press release. He lost a run for California’s Attorney General last year, although good news, he was supported by some Tea Party activists! Is he excited for this new career opportunity? Well, here’s what he said.

“Marriage has quite correctly been described as a bedrock of civilization. Protecting the institution of marriage is a critically important issue, and I’m honored to join such distinguished company on the Board of such a phenomenally effective organization as the National Organization for Marriage.”

Based on his track record, it seems safe to say that there is even more you will disagree with him on than just that NOM is a “phenomenally effective organization.” For instance, he believes that marriage is for procreation and families, and “the people who have the greatest natural instinct to care for children are the natural parents,” which doesn’t leave a lot of room for you and your family. Also, one has to wonder if, though NOM has become gradually less effectual and been taken less seriously in recent months, if the appointment of a male ‘intellectual’ figure with tea party connections will be successful in somehow leveraging the environment of political extremism around the 2012 election to once again make people care about them at least a little.

Either way, you can at least look forward to reading Maggie Gallagher’s book. Maybe she’ll ask us for a blurb.