On Friday, while the rest of the world was leaving work early and waiting with bated breath for it to be 5:00 so they could open the bottle of whiskey, Rep. Trent Franks was having a “Defending Marriage” hearing. What was the hearing about specifically? It was pretty unclear, seemingly intentionally, and it seems like many people who attended may not have known that it was in direct reference to Obama’s decision not to defend DOMA in court until they got there.

While we’ve been conditioned to fear things labeled “Defending Marriage,” and with good reason, this one seems to have turned out… surprisingly well? Or at least not worse for us, which is almost the same thing at this point. Granted, that may be because this was a process with no real legislative or judicial conclusion – it doesn’t seem like this ‘hearing’ could ever have had any actual consequences, but was instead meant as a government-sponsored anti-gay PSA and/or a scare tactic, not unlike the “Muslim hearings” last month. Still, though, that makes it almost more satisfying that the homophobes involved came out looking like just that, and not like defenders of anything. 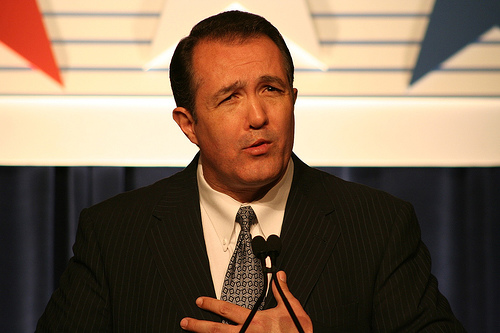 First of all, while the 10-member panel was supposed to include “some of Congress’ most virulent opponents of gay rights,” somehow all 5 of the Republican panel members failed to appear. Because they forgot they left the oven on? Because they paid attention to, you know, the Prop 8 trial and realized how disastrous it would be to try to actually debate with their ideas? Because the entire country is in a financial and legislative crisis and they realized that this issue DIDN’T AFFECT THEIR CONSTITUENTS AT ALL and they had more important things to do? We may never know.

In any case, this left only Rep. Franks to do the “defending” – Rep. Franks who believes, apparently, that the President’s decision on this issue could be an impeachable offense. The rest of the panelists were gay marriage supporters, like Rep. Mike Quigley and Rep. Jerrold Nadler, who had helpful and well-reasoned gems like these to contribute to the discussion:

HI THIS IS SPELLED WRONG??

+ “Let’s be clear: DOMA isn’t just an unconstitutional law, it’s dumb public policy,”
+ “Every one of the stated rationales for DOMA has been refuted by our better judgment or our shared experiences.”
+ “There’s nothing radical about being allowed to marry the person you hold closest in your heart. And there’s nothing radical about expecting that union to receive the full protection of the law.”
+ “Far from demeaning, trivializing, or destroying the institution of marriage, lesbian and gay couples have embraced this time-honored tradition and the commitment and serious legal duties of marriage.”
+ ” The fact that DOMA carves out an entire class of married citizens based on sexual orientation also violates constitutional equal protection guarantees.”

It was a little like a mini Prop 8 recap in that regard. Also in that as far as anti-gay testimony, the opposition made up for in willful persistence of belief in misinformation what it lacked in numbers. Maggie Gallagher was the star witness for Rep. Frank, and she said a lot of stuff like this.

“If, in fact, marriage, as a public and legal institution,” Gallagher testified, “is oriented towards protecting children by increasing the likelihood they have a mother and father, then same-sex couples do not fit, and conversely, if same-sex couples fit the definition of marriage then marriage really is no longer about responsible procreation in the sense.”

(Protip: marriage as a public and legal institution is not oriented towards protecting children.)

(Also, Lez Get Real has noted that Gallagher was not wearing her wedding band during the proceedings on Friday, and it’s also true that her first child was born out of wedlock. While both of these things are perfectly wonderful as life choices and not something to be castigated for in any way, they do sort of problematize her assertion that marriage is primarily about and for children, and that it’s necessary as a social institution for children and families.)

Want to see it go down for yourself? Here it is in washed-out stitched-together glory:

There isn’t much to celebrate in a real sense, because since this entire ‘hearing’ was more about Rep. Frank’s feelings than anything else, having it go ‘in our favor’ doesn’t actually do anything for us. There is, however, justification for putting one more notch in our bedpost of “every time we’re allowed to have a reasonable discussion about this using logic and real-world concepts and word definitions, we win.” Because, uh, we do. Try not to think about the fact that in the world we live in, that doesn’t actually mean much, and also the amount of money it probably cost our broke-ass government to hold this joke of a session. There! Don’t you feel better now?  Me neither.