There’s still an atmosphere of celebration in NYC after a weekend of 659 marriage licenses for same-sex couples. But not everyone is taking part, because some people are still, as they are wont to do, bizarrely perceiving the legally recognized happiness of some families as some kind of vicious attack on their own! Who would do that, you ask?

Well, obviously Maggie Gallagher of The National Organization for Marriage. Despite the fact that her increasingly ineffectual organization – after one of their “Summer of Marriage” campaign organizers defected to form the National Organization for Marriage Equality and the Wall Street Journal recently called them “deceptive” and “sore losers”  – hasn’t accomplished anything in quite a while, Gallagher is now vowing to punish those New York politicians who helped marriage equality come to their state. 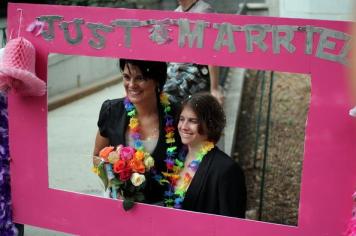 why you mad at these cute people tho?

In a slightly more legitimate but ultimately probably useless attack on New York married couples’ newfound legal stability, a group called New Yorkers for Constitutional Freedoms is filing a lawsuit that claims that the new law allowing same-sex couples to marry is “in violation of the Open Meetings Law and the Senate’s own rules.”

“Constitutional liberties were violated. Today we are asking the court to intervene in its rightful role as the check and balance on an out-of-control State Legislature,” said Reverend Jason J. McGuire, executive director of the group and a resident of upstate Livingston County, where New Yorkers for Constitutional Freedoms v. New York State Senate was filed.

The Senate and state attorney general are declining to comment on the lawsuit, although a spokesman for the governor put it generously when he said the lawsuit had no merit, and also that “the plaintiffs lack a basic understanding of the laws of the State of New York.” If the lawsuit was successful, it would nullify all the same-sex marriages performed in New York, thus making it an even more devastating blow than Prop 8 in California.

But these attacks aren’t likely to work. Aside from the obvious obstacles they face – that NOM has virtually no real political clout and the lawsuit just filed has no legal merit – they may not be meaningful enough to conservative voters or politicians that anyone is willing to support them. America’s recognition of the legitimacy of gay families is higher than ever before, and even insiders in the Republican party have indicated they may just not find it worth it to continue persecuting queer couples. Even Texas governor Rick Perry and Presidential hopeful Michele Bachmann, who’s one of the most anti-gay politicians you can find out there today, have indicated that they may be giving up the federal fight on gay marriage and deferring to the states.

At an event in Aspen, Perry said, “Our friends in New York six weeks ago passed a statute that said marriage can be between two people of the same sex. And you know what? That’s New York, and that’s their business, and that’s fine with me.” He continued, “That is their call. If you believe in the 10th Amendment, stay out of their business.”

Of course anti-gay activists are trying to fight progress in New York, as they are all over the country – but the important thing is that it’s clear they’re not going to win. New York’s step forward on marriage equality is already spurring activism in nearby New Jersey. It’s not change in and of itself, but activists can take it as a sign that future change for same-sex marriage is going to come from us, not from bigots.