Legend of Korra totally just Dumbledored us and I can’t help but be furious about it.

In the series finale of The Legend of Korra, we see a scene that in many ways parallels the final scene of the show that came before it — Avatar: The Last Airbender. We see our hero and the person she loves talking about how happy they are to have each other and to be able to spend time together. They decide that they want to spend some time, just the two of them, on a vacation in the Spirit World. And then, just like Aang and Katara, they embrace each other and show their love for each other.

The only difference is, Aang regularly said that he was in love with Katara and in that final scene, when the words “The End” appear on the screen, Aang and Katara got to kiss while Korra and Asami only got to hold hands and look into each other’s eyes. We were told that this was one of the most subversive moments on television this year. We were told that we finally had some canon queer representation on a children’s cartoon.

Unfortunately, at least in my opinion, this isn’t quite what we got. I mean, in a very technical way, it is — Brian Konietzko, one of the show’s co-creators wrote a long post on tumblr confirming Korrasami — but in some very real ways it isn’t. If that is what had happened, it wouldn’t be so easy to dismiss them as a couple. In his post, Konietzko says “there’s no denying it,” and that he and the show’s co-creator “decided it was important to be unambiguous about the intended relationship,” but as long as there are people who don’t follow his tumblr and as long as there are still people who subscribe to the Death of the Author school of thought, yes, there is denying it and no, it wasn’t unambiguous.

Even though the co-creators confirmed it on their tumblrs, it still rings extremely hollow. It reminds me of back in 2007 when JK Rowling announced that Hogwarts Headmaster Albus Dumbledore was gay. While there are a few clues in the books (his relationship with Grindewald), it was never actually stated in the book. Rowling even replied to her fans’ positive reaction by saying “if I had known this would have made you this happy, I would have announced it years ago.” Well then, why didn’t she? Representation that only comes after the fact doesn’t have nearly the same impact as representation that you can see, clear as day, there on the screen or on the page.

That’s why I’m not celebrating Korra and Asami’s great moment.

I’m damn furious that six years ago, Nickelodeon was allowed to show a 12-year-old boy kissing a 14-year-old girl and telling her that he loved her, but now, that same network refuses to show a 21-year-old woman do either of those things with her 22-year-old female partner. That’s garbage. That’s not progress. That’s the opposite of being subversive.

Honestly, I really want to celebrate this. We just had two queer women of color ending up together on a TV show. That should be something we celebrate. But I can’t, because every time I think about it, I think about how people like me still aren’t allowed on many television channels. We aren’t allowed to say “I love you” and we aren’t allowed to kiss the ones we love. We aren’t allowed to confirm our identities. Both Korra and Asami were shown kissing Mako, the male character they each dated, but when the time came, they couldn’t kiss each other. That sends a pretty clear message that one type of relationship is much more acceptable than the other. And no matter how great of a message the final scene showed, this message still hurts.

This moment is supposed to be groundbreaking, but really, is this any more gay than anything Adventure Time did back in 2011? That’s when the episode “What Was Missing” came out and it seemed like Marceline did too. In the episode, Finn, Princess Bubblegum and Marceline are off chasing the Door Lord in order to get back the items he stole from them. When they get to a door that can only be opened by a band singing the truth, Marceline sings clearly queer lines to Bubblegum like “I want to drink the red from your pretty pink face” and “I shouldn’t be the one that has to make up with you/But why do I want to?/Why do I want to…” before she cuts off and realizes what she’s about to say. At the end of the episode, we learn that Bubblegum’s stolen item was a t-shirt given to her by Marceline that Bubblegum now sleeps in every night. In a later episode, we see Bubblegum wearing the shirt, smelling it and inhaling deeply before showing that she also has a picture of her and Marceline kept away in her closet.

That relationship even became canon earlier this year, when Olivia Olsen, who voices Marceline said that she had a conversation with series creator Pendleton Ward where he told her “Oh, you know they dated, right?” about the pair. So really, is this a bigger step forward than that? If we already have a canonically queer couple in a children’s (or really teen’s, let’s be honest) cartoon, the next step isn’t to move parallel.

To be fair, the scene at the end of Korra is maybe a little gayer and Korra and Asami’s relationship is built up more than Marceline and Bubblegum’s over the seasons, but not by much. And I think it’s also more than fair to say that Legend of Korra was intended for an older audience than Adventure Time is, or at least what Adventure Time was back when “What Was Missing” premiered. Or hey, why don’t we celebrate The Disney Channel’s Good Luck, Charlie, which not only was meant for a younger audience, but also straight up had a character with two moms who were shown on screen and had some lines. Now that’s being subversive.

Also, I think it’s important to note that it’s totally fine for some forms of media to have canon queer couples without needing to show them kiss or say “I love you.” For example, if the characters were 12 and 14, like they were in the original The Last Airbender series, this kind of scene would definitely get the message across. But when you have adults in a show that’s allowed to show suicide, violent murder and a whole slew of different-sex couples kissing, then this just simply isn’t enough. 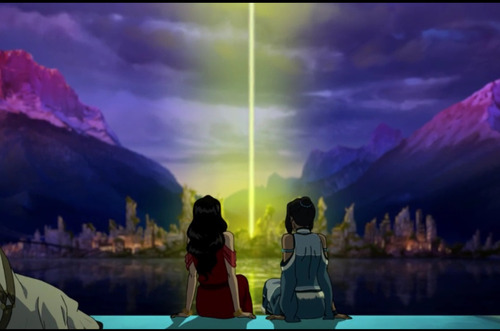 Am I over the moon that some young queer girl might have seen this and seen herself in Korra and Asami? Yes, without a doubt. It’s a beautiful thing when people who are so often erased and marginalized get to see some representation and feel a little bit less alone. But just as much, I’m furious that that same girl’s friends would be able to easily argue that neither character was actually queer.

Frankly, it’s insulting that they weren’t allowed to show twenty-somethings kissing or declaring their love. Whenever I see a gifset of the series finale or a tweet or tumblr post celebrating the moment, I can’t shake the thought that this finale means that there’re a lot of people who still think that there’s something dirty or wrong with the way I am. That there are a lot of people who still think who I am should be hidden away and denied. And a lot of those people are in positions of power.

So, while I think that yes, that was a great series finale, and an even greater moment, I also think we shouldn’t get ahead of ourselves and pretend this is something it’s not. We really shouldn’t still be at the point where after-the-fact, barely there representation makes us this excited. Instead, it should make us disappointed and frustrated. It should make us furious and full of righteous anger. It should make us demand something more.