That’s right, folks, it’s for serious. Olivia Olsen, the voice actress for the Marceline, the babely bass-bearing Vampire Queen of Adventure Time, openly confirmed what we all knew deep in our little queer fandom hearts to be true at a book-signing in LA recently, Princess Bubblegum and Marceline totally had like, a romantical thing-thing. Yeah girl, you know what I’m talkin’ about.

Ever since that now-infamous episode where a clearly smitten and obviously scorned Marceline rips out a not-in-the-least-bit-hetero-or-subtle, vocally formidable, bare but sludgy, bitter-girl anthem for the target of her scorned affection, Bubblegum Princess, all of us gay girls (especially us over at Autostraddle) have eagerly wanted this ship to be outwardly confirmed by someone officially involved with the show and be stated as canon, most preferably through heavy gay bass riffs. Heck, I think even a lot of straight girls wanted it confirmed, too, just through like, heavy straight bass riffs (which I think we can all agree just doesn’t sound as cool). A ton of people in general have Picked Up The Not So Freakin’ Subtle Clues and have been rooting for Bubbline, bemoaning the unfortunate “Don’t Ask, Don’t Tell” attitude about the Ghost Ship we aren’t allowed to admit we see and instead must lesbionically dedicate ourselves to compiling involved “Bubbline Is Real U Guys” posts, writing questionable fanfic, and drawing amazing and Not-Merely-Suggestive-Just-Full-On-Freakin-Gay fan art to bide the time until this day, this wonderful, glorious day in which we are affirmed in our GayCanon Queer Day Dreams. And now that moment has come! 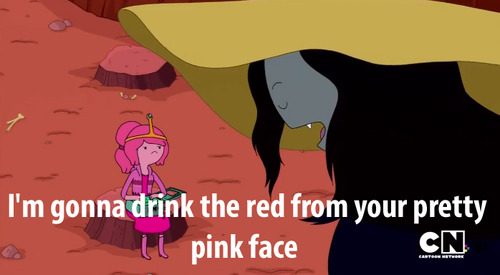 There’s no need to tell you just how important the confirmed and not merely implied visibility of queer characters in children’s and youth TV shows are. Queers are, at one point in time, believe it or not, kids, and queers even have, if you can possibly imagine, children themselves. Thus and therefore, these queer relationships and interactions in cartoons have potential to positively reflect our real lives and attractions to both affirm ourselves, reduce stigma, and give young kids the fluency in these identities early.

As a kid, I picked up on the queer subtext in my Most Favorite Show Of All Time, Sailor Moon. I UNDERSTOOD it DEEPLY even if there was a lot about it I didn’t understand. And so, it confused and secretly frustrated me that they made not-cousins Haruka and Michiru straight, when it was so clear Haruka was the surly soft androgynous butch to Michiru’s stoic and cool ocean-femme, meanwhile all the inner senshi had Haruka’s name shamelessly scribbled in their Lisa Frank diaries and on their Angelfire pages. As did so many of us fans. I remember being in my preteens and comparing notes with other sailor moon fans—yeah, this was totally homo, wasn’t it? These characters performed their gender and expressed themselves in ambiguous and non-conforming ways, huh? We totally know about Kunzite and Zoisite, right? Right. The piss-pour attempts to cover it through voice over choices and omitting of scenes wasn’t fooling anyone, no, not even kids.

I, a little embarrassed without fully understanding why but having a somewhat vague idea, would extensively image search and save art and photos of the Senshi onto floppy discs and felt EXTRA embarrassed when I came upon images of Haruka. How different would have things been for canon baby gay!Bri if the ship was allowed to sail here like it had been in Japan? Instead of wondering, let’s revel in this victory for gay animation representation via Bubbline, and look forward to even more progress in that front—queer characters who are not formerly but CURRENTLY dating (and are openly gay without their voice actors then having to recant or express how it isn’t explicitly allowed to be officially canon)? Trans and non-conforming characters who are not the butt-end of a joke? I mean, literally, the possibilities are endless, the stuff’s all made up.

Briana has written 6 articles for us.