So, there’s this new lesbian short film. It’s called Sara. You haven’t seen it, I promise, unless you were at Outfest. It stars out lesbian model Jessica Clark and Julissa Bermudez (yes, the MTV chick who hosts the Jersey Shore reunion specials). Guess what. THIS MOVIE DOESN’T SUCK, and it deals deftly with two topics rarely touched upon in the lesbian lexicon of filmytime movies.

GUESS WHAT ELSE. This film was at Outfest and the New York International Film Festival last year, but it’s gonna make its online premiere today, Friday January 21st, on Autostraddle.com, at 12 noon PST/3pm EST. So that’s right here on this website. The one you’re already on. So if you just hang out here for a while, sooner or later the movie will begin. But first we have a trailer and an interview with Jessica Clark!

This is Jessica Clark, she’s a lesbian with really nice hair, we talked to her at the 2009 NewNowNext Awards in which she won an award for being hot:

So, here’s the Trailer:

.
Were you and Julissa friends prior to filming? What’s your off-screen relationship like?

No, Julissa and I had never met prior to us both being cast in Sara. She is an incredibly talented and professional actor and was a pleasure to work with. She is also hysterical and made me giggle constantly by always singing and dancing around during breaks between rehearsal and filming. Sara deals with a very intense, consuming moment in time for our two characters, they really make an impact on each other that neither will ever forget. Julissa was definitely able to lighten the mood when it was needed sometimes, and then be utterly focused and committed to Sara and the world we were creating together. Now… we both live in LA and it’s very cool to hear what she has going on when we get a chance to meet up. 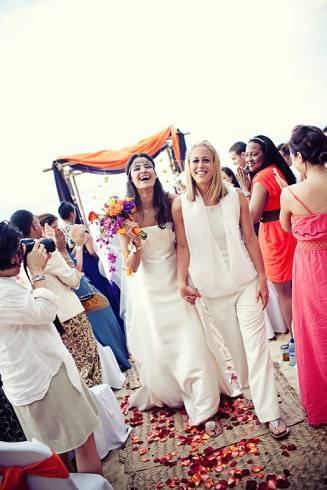 They say there is nothing like falling in love in New York City. Any insight on what makes romance so special here?

NYC is where I met my amazing wife Lacey Stone so it will always be a place of love for me! I think the coolest thing about it is that it’s really a city of immigrants… Whether from elsewhere in the US or the world, people choose to move to NYC to create, recreate, inspire and achieve. There’s a feeling that you can be whoever you want there and achieve whatever it is that you want as well so it’s exciting and dynamic and that’s reflected in the people that you meet and fall in love with. I definitely see that theme in our relationship… and I’m very aware how lucky we are to have that.

How is married life with Lacey these days?

Lacey’s second MTV MADE episode just aired on January 19th (her previous one aired at the end of 2010) and she’s had recent appearances on CBS and NBC as well so her career is really going amazingly! I just watched the episode and she was so dedicated and so inspiring!! She made me want to go work out again today =) Married life is awesome. We are coming up on our first year anniversary this February and it’s been an amazing ride so far. We are splitting our time between NYC and LA as a result of our jobs, and while it can get tough to be apart sometimes, there’s always a very fun reunion coming up =) What I am so proud of is that we are both so determined to love each other and support each other in our professional ambitions as well as our personal commitments. She is amazing and I’m so proud of her, and she makes me happier and laugh harder than anybody else I’ve ever met! And I am very serious so that’s not easy! I love her very much and I’m lucky enough to be able to say that I know she loves me too.

As you transition from modeling and hosting into acting do you ever worry that being out will cost you roles?

No. It is what it is, I am who I am. There’s any number of reasons why you may or may not book a role and I know from my modeling career that if you focus on that too closely all you will accomplish is to drive yourself crazy. All I can do is work as hard as I can to be the best that I can be and let the chips fall as they may.

Have you read Portia de Rossi’s book Unbearable Lightness? She had a similar path to you re: modeling as a closeted lesbian who then moved into the acting world. Would love to know your feelings on the book, specifically as it relates to the pressure to be thin that modeling puts on young girls.

I did not read Portia’s book, except for several published excerpts. What I did read felt authentic and brave and I deeply respect and applaud her for putting her story out there. Earlier in my recovery it would have meant the world to me to read her experiences and see that not only has she come out the other side and survived but that she has flourished!! I have no doubt that there are many people out there for whom her words will be a great comfort and inspiration. It was a personal choice for me not to read the whole book: in that at a certain point in extended recovery from eating disorders….having lived through similar experiences very intensely myself, you need a little distance from it. The feelings and memories can be very overwhelming when reading such a deeply personal account such as Portia’s. 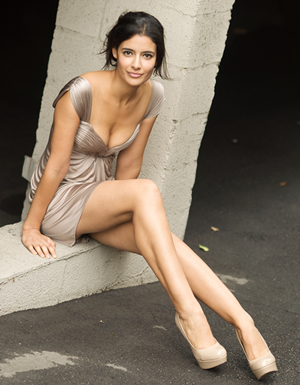 How did you become involved in the film?

I was lucky enough that the director Stan had been a reader of a blog that Lacey and myself had been writing together for about a year. We really wanted to explore lots of deeply personal themes such as our relationships with our bodies and our personal lives and sexuality, etc. Stan responded to my writing and approached me to read for the part of Lexus. It was really a very organic and wonderful way to begin working together because her only knowledge of me was this deeply personal writing I had been doing, she had never met me prior to the initial audition. It’s rare that we get to meet people in such circumstances. And then once I had met her and read the script for Sara I really fought to be a part of it because I felt very strongly that there was a unique voice there and a story that I really wanted to be told.

What was the biggest challenge for you while making Sara?

Sara was my first professional acting job and so the challenges were myriad. My character Lexus comes from a very different place and has very different life experiences from me, so it was a challenge to understand why she makes the choices that she does. She also has a very different physicality to me…. I guess you could say that I am a lot more self contained than her and so there really was a whole process of learning to inhabit my body differently. I was very lucky to have Stan as my first director because her directing philosophy is very actor focused and she really spent a lot of time with us and our performances. The experience definitely ignited a full blown desire to act professionally and also gave me the confidence to believe that I had talent … which is a huge gift!

What’s next for you either in film or TV?

I just filmed an ABC pilot half hour sitcom which we will have to wait and see if it gets picked up by the network. I have been cast as one of the two leads in Nicole Conn’s (Elena Undone) new feature film A Perfect Ending which is in pre-production right now and due to start filming very soon. And I have just been cast as a “bad ass ninja” in another feature film TBA shortly which films early this summer. So I’m lucky and happy, busy and working VERY hard!