Happy New Year’s Eve, guys. What are you doing tonight? I’m going to play iPad air hockey with my little brother because my friends want to go to Kentucky and that sounds even worse than Ohio. Anyway, Emily’s still on vacation so I’m bringing y’all the awards this week.

In honor of the new year, we’ve spent the past ten days compiling the top ten of everything. Por ejemplo, we’ve had the top 10 gay muppets, the best games and television of 2010, and the Autoindex where you were introduced to our resident invisible badass, Tess.

The Christmas open thread was pretty effing popular again this year, Jess had an interview with Laurel Holloman, and we have photos from the calendar release party in LA.

Last but most, have you donated or subscribed to Autostraddle yet? You get a card! Like in the mail!

The Truth Award to plainayn: “Not this.”

The You’re State’s Looking Out for You Award to ash-catch-this: “I’m so glad I live in NC. It’s comforting knowing that even if I can’t get a girlfriend I can always count on the government to fuck me.”

The Truth^2 Award to Rawrosauriens and kd15:

On Joe Biden Wants To Give Us Gay Marriage For Christmas, Gay People Are Santa:

The Leave Britney Alone Award to Gabriel: “To HOMOSEXUALS Everywhere, Please leave Christmas and Santa Clause ALONE. Please keep the sickness of your evil perversions out of ALL holidays. Aren’t you all being sick enough???? Merry CHRISTmas (sarcastically).”

On We Celebrate Upcoming Star-Studded Muppet Movie with the Top 10 Queerest Muppets:

The Appropriate Use of a an Image Award to LaughingEagle but mostly carlytron:

The Priorities Award to thelovelyjazmin: “I found this site by google searching “SKINS support group” for my boyfriend after Freddie died. I stayed for the half-naked ladies and the kittens.”

The Phantom Award to Elizabeth: “One time Tess called in the middle of the night and yelled at me. Also, she has promised me a beer no less than 3 times. She lives one neighborhood up but I’ve still never seen her in person, I’m not sure she actually exists. I mean, I’m not sure she is corporeal.”

The I Hope Someone Important is Listening Award to tex: “this year I asked santa for America to go to the metric system. IT JUST MAKES SENSE.”

The Good Practice for Something Award to Laneia and wasteunit: 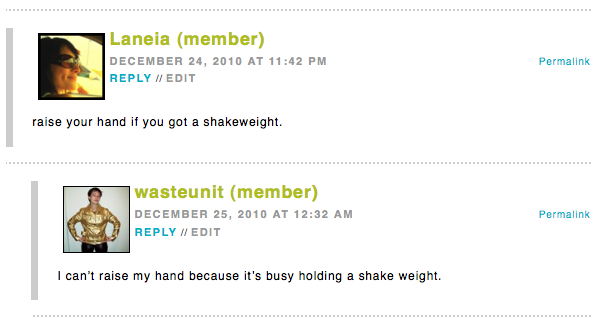 The Someone has Little Siblings Award to amythicalcurse: “THEY WOKE ME UP AT 6:30. THE SUN WAS STILL ON THE OTHER FUCKING SIDE OF THE WORLD.”

On You’re Constantly Thinking About Food:

The 15-year-old Award to Mimsy and katie_m: