If you’re part of a same-sex family in a state where gay marriage isn’t legal, your life is hard. If, for whatever reason, the parents in that family decide to separate, your life gets even harder – not just because of the separation, but because your total lack of any kind of legal legitimacy makes the logistical process of separating a total freefall, where everything you thought you could count on forever is gone and suddenly you don’t know what you’ll still have in your life the next day, if even your children will be taken away from you.

The one beacon of hope in these situations is second-parent adoption, which most states provide for same-sex and heterosexual families. A child with one biological parent can be legally bound to a second parent, creating a patchwork little family that is recognized by the courts, if not by society at large.

If you live in North Carolina, you just lost that one fragile assurance of stability. North Carolina justices have just de-authorized second-parent adoption, which affects not only same-sex parents but many adoptive families across the state.

…in a heartless decision, the North Carolina justices have ruled that this procedure is not authorized in their state. And, making matters worse, they are applying their ruling retroactively, canceling the adoptions that were previously seen as 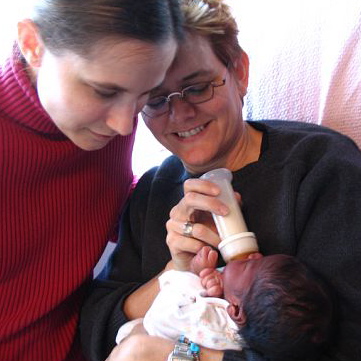 having been properly granted by local courts. Most state courts facing the same question have approved second-parent adoptions, and in the few states where courts have ruled otherwise (Connecticut and Colorado, for example), the state legislatures quickly fixed the problem. However, that is not likely to happen in the conservative legislature of North Carolina.

I don’t have a background in social work or family law; I don’t know much about the legal reality for adoptive families. I’m still left wondering, though: who could this possibly help? Is it even possible to see this decision as anything other than a calculated attack on adoptive families?

The justices did rule that the now non-legal parent would retain the right to seek reasonable visitation rights or even shared custody, which will be a boon to nontraditional families both straight and gay who haven’t pursued second-parent adoption. It’s true that those families have been left out in the cold by the system for far too long. But their due parental rights should have been granted long ago, and shouldn’t have come at the expense of other families. And really, anyone who’s lived with and cared for and fed and clothed and loved someone else for years should never have to settle for possibly getting visitation rights. This is damaging to families, and serves a political agenda instead of citizens – too bad the religious right doesn’t seem like they’re going to do anything about these anti-family values activist judges.

Rachel has written 1126 articles for us.