Heather Peace is one talented, and busy, lady. Most of you would be familiar with her role as steadfast detective, Sam Murray in the BBC lesbian drama Lip Service, or maybe even as Nicki Boston, the Head of English in the popular BBC One school drama series, Waterloo Rd. Just recently, Heather was voted the 20th hottest queer lady in all the land in the Autostraddle Hot 100, while DS Murray was voted the 9th most bad-ass fictional female crime-fighter, a list that was perhaps not as popular as the Hot 100 but important nonetheless.

Acting and hotness aside, Heather Peace is also a talented and accomplished musician. Her debut album, Fairytales, was released independently in May and has been burning up the UK charts. Produced by Oscar-nominated producer Nigel Wright (Madonna, Streisand, others), the album features twelve theatrical pop songs with delicate melodies, soaring vocals, and lyrics that offer an honest glimpse of Heather’s life, loves and associated lessons.

Heather is not an actor who suddenly decided to have a crack at music. A classically trained pianist who’s been songwriting since the age of fourteen, Heather paid her dues like most other musicians, starting out performing for friends at her local pub and undertaking a jazz residency at a bar in Manchester. Perhaps this is why she seems so genuinely appreciative of the reception her music receives, and of the fans and collaborators who have helped her get this far. (When discussing her music, Heather constantly refers to “we” – her band, her producer, her team. There’s no ‘I’ in Heather Peace.)

I spoke to Heather on one of her few days off, between finishing her sold-out tour and shipping off to Glasgow to film another season of Waterloo Rd. With no one around to enforce a time limit, plenty of ground was covered – from Fairytales and the darker side of relationships, to how it felt to accompany Sam on her spiral towards rock bottom during Lip Service Season Two.

[If you haven’t yet seen Lip Service Season Two, the second page of this interview contains spoilers]

So you just wrapped up a sold-out tour in the UK. How was it?

It was absolutely fantastic! It was a dream come true, honestly, which I know sounds corny but it just hit every expectation and more. On the final night I managed to persuade Alison Moyet to get up on stage and sing with me! She’s a big childhood hero of mine — her and other British female artists like Annie Lennox and Kate Bush — so I was absolutely beside myself when that happened.

Wow. Was this something that was planned, or did Alison just jump up on stage?

Well, we had gotten to know each other a bit on Twitter; she’s quite shy and so I suggested, “you might like to come along to the London gig”. Once she said yes, I very cheekily followed with, “and maybe you’d like to get up on stage during my encore and sing one of your covers?”  We didn’t announce it ahead of time because I wanted her to feel comfortable enough that she could drop out at any time, which she didn’t.

It’s kind of mad, isn’t it? I guess that’s what’s been crazy about it. You know, I’m in my thirties. I’ve written music all my life and I have gigged all my life, and suddenly this is all happening now. I can’t even get my head around it. Everyone was singing along and the whole time I was thinking, ‘wow, this is so awesome!’

Early last year you said that your shows tend to attract older lesbians who don’t want to go to nightclubs. Now that both Fairytales has been released and your profile has risen further, has your audience become more diverse?

It hasn’t completely changed, but the age range is definitely a lot wider now. You can’t come to my shows unless you’re sixteen or older because we’ve been playing at 400 – 450 capacity venues that have bars inside. But we definitely had sixteen-year-olds, right through to sixty and seventy-year-olds. A few straight guys were in there as well.

I’m on a television show over here called Waterloo Rd — it’s a more mainstream show that a lot of youngsters are into — and I think I’ve picked up a diverse audience through that. So there have been a few changes. We also play at more seated venues now because many people who come to my gigs are not regular gig-goers, so having a mosh pit where people stand and get knocked around isn’t really for them. [laughs]

You seem to be incredibly accessible to your fans, the way you talk to them on Twitter, chat to them after shows, and so on. Why is having that close connection important to you?

They’re the reason that I’ve been able to do what I’m doing. There’s been no record company involved, or anything like that. I’ve always had this thought as a musician and an actor as well, that fans are really the people that essentially employ you. If nobody watches or listens to you then you don’t have a job! Sometimes I think musicians and actors can get a little ahead of themselves, in that respect.

You’ve been involved with a major record company in the past. Did that experience influence your decision to release Fairytales independently?

I was signed [to BMG] briefly, in my early twenties. I think because I’m a television actress, and because of my age and a few other factors, that those things would have worked against me if I had gone after a recording contract this time.

To be honest, Fairytales happened quite organically. I was playing small shows that were selling out, so then we decided to do a major tour and pump those earnings into creating the record. It was through my experience at BMG that I knew (producer) Nigel Wright. I couldn’t afford to pay him and so he did it for nothing, we just paid for his studio and his engineers. Without BMG I wouldn’t have met Nigel, and without Nigel, Fairytales wouldn’t have the sound that it has. So nothing was really planned, everything just kind of fell into place. 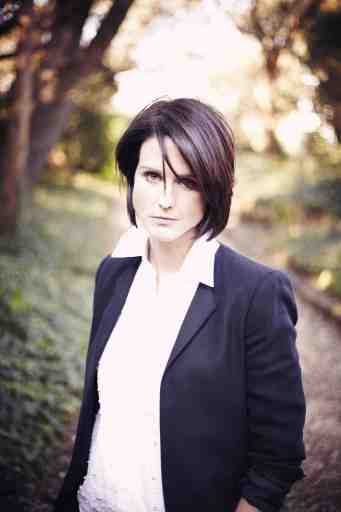 Fairytales seems like an interesting choice for the album title, given that not many of the songs are about happy endings. What is the significance of that title?

Personally I’ve always liked title tracks that are placed at the beginning or the end of an album. Because the song “Fairytales” is so stripped back, it felt like a full stop. Lyrically that song seems to summarise everything that is on the album, which is to say that what fairytales taught us about love is not necessarily true – it’s actually hard work, but we’ll never stop believing in our make-believe and trying to make love work. It was also the last song I wrote for this album.

The original title was “Sabotage” [another track from the album] and if the album had been released last year then I would have gone with that. But my life has moved on, things have changed and I wasn’t in that place where I had written “Sabotage” anymore. I understand myself a little more now, and “Fairytales” is about how I gained that understanding of my situation.

Every track on the album seems to come from an incredibly personal place. Some in particular, such as “Sabotage” and “Make Me Feel,” are about the darker side of past relationships and also of yourself. Was it challenging to put those experiences and feelings out there?

It was really nerve-wracking. But you know, I’m not twenty-three, I’m not singing about hearts and flowers. I think it’s one of those things where you hit your thirties and you really look at yourself. You look at the way you’ve been in relationships, or the way you’ve gotten drunk to forget things, and you know, I can’t do anything other than be honest with lyrics. If you’re not honest with lyrics then things can become really quite bland.

It’s nerve-wracking to think that people are now going to look at me in this way, but at the same time I think some of those things will have resonated with them. Essentially these tracks are saying, ‘I know this about myself and I’m trying to sort it out’.

Now that you’re in a good place, and in a loving relationship —  will that be reflected in future material?

I’ve already started writing new material and there are still some experiences from the past that I can call on. Also I think when you get older it becomes easier to look outside of yourself. There’s a track that I’m writing at the moment which is about — weirdly, now that I’m in a good place — friends of mine who have recently broken up with people who they’ve been with for fifteen years. So I’ve observed experiences that will resonate with people, experiences that I can draw from.

So I’m not really worried. I’ve already got my thinking cap on and it’s going to be fine. I don’t think I’m going to start writing songs that go, [starts singing] “I’m really happpyyyy”.

Next, Heather talks about her past and future in acting and music, and also Lip Service!