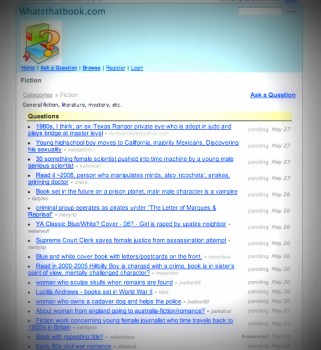 Ever struggle to recall the name of a book you read and perhaps even loved? Annoyed that none of your friends can remember what the title is of that book about the Japanese guy looking for his missing wife that involves a weird teenage girl and maybe a well or a parallel universe or something?

On whatsthatbook.com, passionate readers can crowdsource figuring out “what the hell the book was called.” It’s a brilliant concept for a website. Unfortunately many readers never get the answers they seek and sometimes what’s more shocking is those that do, such as “Girl’s step-mom drinking her period blood” (“Innocence” by Jane Mendelsohn) and “book from 70s/80s, girl named Laura, goes to Catskills for summer with parents, comes back to NY alone, gets drunk and gets in trouble, sees Woody Allen” (“The Rise and Fall of a Teenage Wacko” by Mary Anderson). There are a lot of people out there looking for a book about a teenager who falls in love with a ghost, sidenote.

Below we have listed the subject lines from 40 of the nearly 5,000 posts created by users of the whatsthatbook Fiction Forum.

2. woman electrecutes overbearing mother in law via the lawnmower

4. Looking for a book about a biracial girl who goes with her mother and friend to a lesbian beach

5. burned girl lives by cemetary talks to dead, dead have jobs, one is a baby that always cries

6. girl killed in car wreck father puts her brain in a gorilla’s

7. girl goes on a ship. has lice. whips an old man. and finds out many crew secrets

8. lonely girl experiments with male and female lovers before being attacked by her stalker on the final page

9. A couple who doesn’t want kids, he then does, she doesn’t, they fight break up, she then finds out she is pregnant, she goes to abort, she can’t do it, they live happy.

10. a girl visits her grandma and meets an immigrant clown

12. A book where people don’t want to grow up and eventually they kill themselves?

13. Single mum starts a relationship with a clown/balloon animal maker who lives on a canal boat

17. A woman is raised by wolves becomes wild, one baby she has dies and she eats the baby like she saw her wolf mother do

19. two children walk to school, one gets hit by car

21. FAERY KILLER, girl moves into new place and neighbour is weird big guy who is a sculptor, turns out he is murdering faeries for sculptures

22. underwater team discovers between plates of ocean floor a perfect society that can recycle souls

23. Girl gets off of train to get brother a donut and train takes off

24. Book from 2000-present, about a girl and a polar bear NOT NORTHERN LIGHTS

26. Book about a girl who lives with her grandmother at the sea side. They eat slugs.

27.  Niki is Olympic diver then tobacco farmer then campaigns against cigarette companies

28. an ex-Texas Ranger private eye who is adept in judo and plays bridge at master level

30. Read in early 90s, woman works in corporate world, dies, and wakes up in hell.

31. crime story about some bad guys victimized by a cannibalistic hermit

35. Book about man that lures children to house of pleasure and then they can’t leave, house is alive

36. written around 1950’s with main character running in a cabbage patch wearing a diaper at end of novel

37. romance: girl has to do hard labor in fields, sold nude on auction block, then finds love

38. a guy who time travels by jumping over a pit with a bear running around it to an island and theres a plane and a witch?????

39. Book about Muffin and a goth girl?

40. fiction book about wolves- no human interaction though