As the academic and religious communities are slowly coming to realize, the demographics of kids who choose to attend religious universities is slightly more diverse than just kids who really like playing worship songs on guitar and not doing anything besides holding hands before marriage. For instance, some of them are gay? Some of them are upset that their schools aren’t more open to discussing difference. Some of them are being supported by alumni! Some of them have made zines! 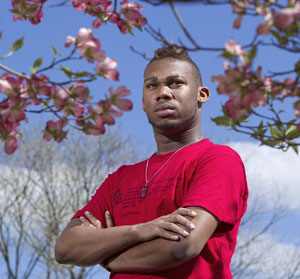 Some of them have to transfer because their schools are a dangerous and destructive place to be.

Isaiah Thomas has been open about being gay his entire freshman year at Messiah College, and also open about wanting to work to make the campus a safer and more inclusive space. During his time there, he was secretary of the multicultural council, a member of the black student union and by invitation, vice president of the Middle Eastern Student Association. In return, Messiah College has been pretty open about not wanting Isaiah to be there, or at least not wanting him to feel like a part of the community or even safe while he was paying thousands upon thousands of dollars in tuition.

According toPennLive, the student has been through hell at the Christian College — from having his wallet, room key and student ID stolen just a month after school started to having a professor call him “an abomination” in class, to receiving a death threat on his Facebook page.

What actions has the school taken in response to this? Well, as you may have gathered given that one of the instigators in the case was a professor, not that much. Although Messiah assures media sources that it’s looked into the issue, any action taken seems to have been pretty low-profile.

“These are institutional issues and protocol we just can’t talk about them, but I can say we followed through with them,” commented Messiah College Provost Randy Basinger.

And it’s not as if Thomas didn’t make the school administration aware of the problem:

Thomas will transfer to Harrisburg Area Community College – as he says, “It’s not worth it – I could pay half as much somewhere else and it be more accepting,” It seems pretty clear from this vantage point that the loss is Messiah’s. The school argues that its behavior is explained by its Covenant, a code of conduct which decrees that students will not partake in “such sinful practices as drunkenness, stealing, dishonesty, profanity, occult practices, sexual intercourse outside of marriage, homosexual behavior, and sexually exploitive or abusive behaviors.” Thomas says that its interpretation of “homosexual behavior” tends to be self-serving; the board defines this rule on a case-by-case basis. “If the board deems it homosexual behavior than that is what it is, how can it be a rule, if it is case by case, that doesn’t make sense to me.”

Thomas was apparently an excellent student, and one clearly committed to improving and participating in his community. Aside from his impressive extracurricular work, he worked hard to create a dialogue around the school’s Covenant and see if there couldn’t be space for a gay student with strong faith, but he says that teachers defended the Covenant as written at every turn. Worse, the school is refusing to release any of its findings after investigating Thomas’s claims about his treatment, despite what they describe as “very strict” anti-harassment policies.

In the end, there’s no arguing with Thomas’s logic; he can pay half as much to go to a school where, hopefully, he can live without death threats or warnings about hellfire from the faculty. Why would he ever stay? And for Messiah’s part – why would they ever give up a bright, courageous, talented, and committed student who wants to belong to and grow in their community? What are they willing to sacrifice to maintain a policy of discrimination? Apparently, at least one brave and commendable student.