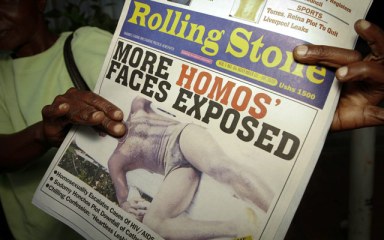 We’ve been talking about the “Kill the Gays” bill in Uganda since November of 2009. Apparently Ugandan lawmakers have selected this week for “when the anti-gay bill will be voted on.” Although MP David Bahti said last month that the death penalty “was something we have moved away from,” the bill still proposes raising the punishment for homosexuality from 14 years to life. The death penalty had been proposed to punish those who commit in “aggravated homosexuality,” which is defined as when one of the participants is a minor, HIV-positive, disabled or a “serial offender.” Jail time is proposed for anyone who knows about homosexual activity happening but doesn’t report it.

A parliamentary committee has held two days of hearings and debates on the bill, which is the first time it’s been debated since its 2009 debut. What’s on the bill? That’s unclear as of yet but we should know soon. But according to an AP news agency, anti-gay activist Pastor Martin Ssempa told the MPs that, “The parliament should be given the opportunity to discuss and pass the bill, because homosexuality is killing our society.”

People on both sides have spoken to the Legal and Parliamentary Affairs Committee. Anglican Bishop Christoher Senyojo, who opposes the bill, says that this bill won’t stop homosexuality but that further criminalization of gay people could fuck up their progress on curbing the HIV/AIDS epidemic.

“If we criminalise the LGBT [lesbian gay bisexual and transgender] community further, it will drive Ugandans further underground and compromise the relationship of medical, counsellors and clergy that is sacrosanct and needs to remain confidential. How can we expect doctors to treat everyone when this bill will require them to report on their patients who are LGBT?”

Many Ugandans believe this whole thing is just a tactic to divert attention from problems the country is having with food and fuel prices.

Over a week ago, opposition parties started a ‘walk-to-work’ peaceful protest which was met with violence from authorities. Ugandan Opposition Leader Kizza Besigye was hospitalized in Kenya, suffering from “rib-cage injuries” from police and army confrontations. While arresting him (in front of the press), police sprayed tear gas and pepper in his face, which required a surgical procedure to “clean his eyes from the inside.” This violent arrest was swiftly met with more riots and a strike and increased international scrutiny. Besigye says the protests are far from over. At GayUganda, a  gay blogger encourages journalists not to fall for this distraction:

So, the country is in a ferment. With the coronation to happen in just a few days time. So, the Anti-Homosexuality Bill is being discussed… and ready to be passed.

So, it is a DIVERSION. The government needs a heady diversion for the country. For the outraged citizens of Uganda.

So, and this is very important, what is the government trying to do?

In actual fact, that diversion is not going to work. Because the citizens of Uganda are simply more concerned about the rising prices of food, and the deteriorating human rights situation. Their homophobia is a reflex which the government wants to use. But, it is not likely to work.

If you want to condemn the Anti-Homosexuality Bill, please CONDEMN in the strongest terms possible, the general state of Human rights in Uganda. Oh, the Bill will be passed in parliament. Have no doubt about that.

But, remember that this is time for the GAY MOVEMENT around the world to make COMMON CAUSE with the average citizen of Uganda to decry the abuse of human rights of ALL UGANDANS.

Nine civillians have already been killed while participating in a peaceful protest.

Regardless of the motivations behind taking this bill to court — as anyone in America can tell you, even bills used to mask other political problems still become laws, regardless of the reasoning behind it —  it couldn’t hurt to sign this petition:

I just signed a petition demanding that Ugandan President Musevini veto the “Kill The Gays” bill should it be passed in Parliament.

We just learned the “kill the gays” bill – a death sentence for LGBT people in Uganda – could come up for a vote in the next 24 hours if we don’t act now.

Conservative leaders are trying hard to push the bill forward before the millions like us who oppose it have a chance to speak out.  If we can create a massive international outcry, theres a chance to stop this bill from becoming law.

This hateful bill appears to be a political diversion, a way to distract from the legitimate grievances of pro-democracy activists, who have been beaten, teargassed, jailed, and even killed in recent weeks.

There are only days left to make sure your voice is heard.  Will you join me in demanding the Ugandan President Musevini veto the “Kill The Gays” bill should it be passed in Parliament?  Sign and share this urgent petition:

UPDATE: 250,000 around the world have already signed this urgent call. Add your voice now to keep up the pressure!

Inform yourself — Read more about the evolution of this issue and watch Current TV’s Missionaries of Hate.