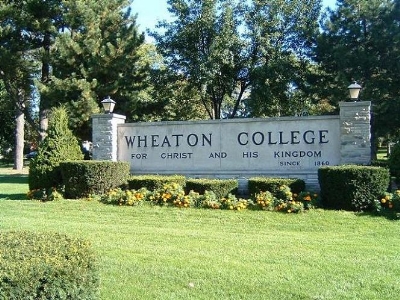 Wheaton College, the “Harvard” of Christian colleges, is not exactly the most welcoming environment for gay people. It’s a long-standing institution that fosters political and religious thought, and has a boastful list of prestigious alumni. But Wheaton has also come to face criticism by LGBT advocates from time to time for problems like, say, the Provost having expressed a support for ex-gay therapy (something the school as a whole and his colleagues do not necessarily agree with). From daily Kos:

As a prominent Christian college in the western suburbs of Chicago, Wheaton College has long stood as a bastion of political and theological conservatism.  The school’s alumni include Bush speechwriter Michael Gerson, former House speaker Dennis Hastert, current US Sen. Dan Coats (R-IN), and other conservative luminaries.  (It’s also worth noting that Rep. Jim McDermott (D-WA) is a Wheaton College alumnus, and that he’s found a way to integrate his faith and political views that does not require him to ignore biblical teaching on greed, care for the poor, and love of neighbor.)  Billy Graham is perhaps the most famous alumnus of Wheaton College, and the college’s schools of theology, communications, and psychology are housed in the Billy Graham Center.

OneWheaton is an alliance of alumni who identify as lesbian, gay, bisexual, transgender, and allied members of the queer community. Here’s how they describe themselves:

Inspired by the “It Gets Better” campaign and emboldened by similar alumni movements happening at other Christian universities we have come together as a voice of freedom and hope for students who feel their sexuality relegates them to a life of loneliness and isolation. We strongly affirm that it doesn’t. In our post-Wheaton lives, we have traversed the contradictions we once thought irreconcilable, and our sexuality has become an integral part of our broader pursuit of justice, compassion, and love. As people of integrity we affirm the full humanity and dignity of every human being regardless of their sexual orientation or gender identity.

DO THESE PEOPLE NOT ALREADY SOUND GREAT?

Recognizing the difficulties of completing the Wheaton curriculum without a touch of self-loathing, closeted feelings, and nervous breakdowns, OneWheaton came together to reach out to students and take the steps toward creating an accepting and affirming environment for baby gays on Wheaton’s campus.

After a Chapel series on “Sexuality and Wholeness,” OneWheaton reached out to the current students studying at the college. The “Sexuality and Wholeness” speaker, an alum of Wheaton, spoke about the scripture’s teachings related to sacrificing what we “want” and “need” in order to please and receive their gifts in the afterlife. He went on to identify self-denial as a way to receive the glorious love of God, hitting on his own experience. You can watch it here. I’m going to hit the most important lines to give a better glimpse:

“As I think of myself saying ‘no’ to a life of gay partnership […] I feel much of the time that I’m turning my back on what would make me happiest and most fulfilled in my life. […] I feel the ache of being without a partner. “Do you see, Lord,” I am praying, ‘what I have given up to be with you?'”

They started by leaving this letter to students, and get a Kleenex, because this is only an excerpt:

The recent chapel message on Sexuality and Wholeness and surrounding conversations may have left some of you feeling alienated, ashamed and afraid. It can be difficult to see the danger of messages about sexuality that emphasize “God’s compassion for the broken,” but as a group of LGBTQ Wheaton alumni and allies, we’ve seen the devastating effects these words have had on ourselves and our loved ones. Many of us felt trapped and unable to respond honestly to these messages while we were students. We feared rejection from our friends and our college. We know many of you may fear the same and feel alone or depressed.

If you are a student and this is part of your story, your sexual identity is not a tragic sign of the sinful nature of the world. You are not tragic. Your desire for companionship, intimacy and love is not shameful. It is to be affirmed and celebrated just as you are to be affirmed and celebrated. In our post-Wheaton lives, we have traversed the contradictions we once thought irreconcilable. Our sexuality has become an integral part of our broader pursuit of justice, compassion and love. We can no longer allow ourselves or our loved ones to be trapped in environments that perpetuate self-hatred, depression, and alienation. As people of integrity we must affirm the full humanity and dignity of every human being regardless of their sexual orientation or gender identity.

You can read the full version here, and even download it! It’s very well-formatted and beautiful. There is also more information about the campaign there.

The letter was left outside of Chapel and all around campus, in case some queers were struggling to get out of bed that day. It was followed by the signatures of several hundred LGBTQ Alumni and Straight Allies of alumni, and left a message of solidarity that can’t possibly be going over the heads of all the students on campus there at Wheaton.

For a school that prides itself on a commitment to scripture, the OneWheaton campaign stands as having a strong and relatable mission for current students: to not ignore or forget the lessons of the Church, but to reconcile them with a desire to affirm and show love to everyone, as they are also taught. The alumni involved in the campaign comprise 50 years of students at Wheaton – and they surely know enough, combined, to successfully attempt this discussion.

There’s been a lot of talk lately about efforts to make gay kids feel safer and more taken care of on campuses where the administration sends out anti-gay messages. If you are going to/went to college, do/did you see any of this on your own campus? Do you want to? Do you think this will change the environment at Christian colleges for the next generation?