It’s September! Here’s your monthly streaming guide, curated lovingly by Riese Benard. Big week for queer casting news in Gay TV Land. Tig Notaro has joined The Morning Show. Rosie’s back for another season of The L Word: Generation Q. Yellowjackets season two — and all its new adult cast members — is in production. Kayla made you a Style Thief for A League of Their Own’s Greta Gill. Natalie recapped the season four finale of Good Trouble. Heather reviewed the new season of Kevin Can F**k Himself and hoped for queer dating on this season of Star Trek: Lower Decks. On the movie front, Shelli reviewed Aubrey Plaza and Alison Brie’s new queer-ish film, Spin Me Round.

+ One of my coping mechanisms when my brain is doing too much is to watch Spanish shows and Netflix served me up the supernatural thriller Girl in the Mirror and it ended up being unexpectedly gay! It’s not a…happy story, as hopefully you can tell from the genre, but I thought it was a very lovely and interesting story. — Valerie Anne

+ Megan Thee Stallion joined the She-Hulk fun this week. I’m still really enjoying this show; it’s quirky and cute and I have a great time while watching it. — Valerie Anne 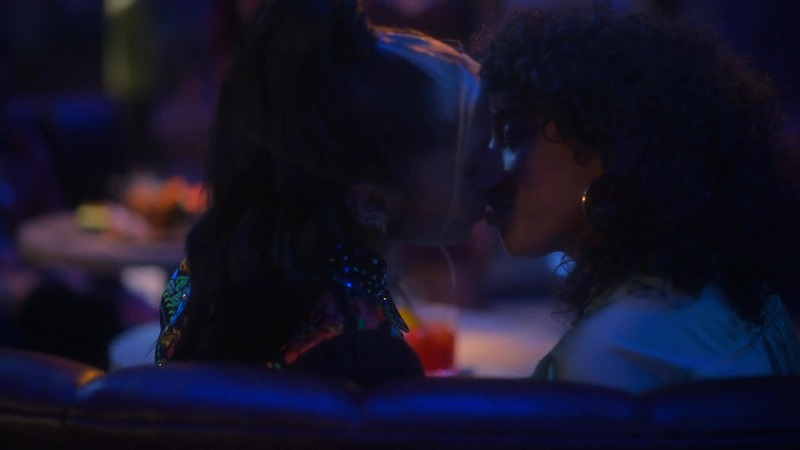 This week on grown-ish, the crew’s rolling through a party that Doug is hosting at Titanium. Everyone’s dressed to the nines except for Junior who can, apparently, roll into the club wearing a metallic Palm Angels’ track suit. Boy, times have really changed since I was in college.

Before she even arrives at the club, Zaara’s got plans to link with Bella. They exchange texts with flirty emojis so you know it’s about to go down. But before they can even cross paths, Zaara runs into Kim…someone else who’s clearly interested in a little time with Zaara. Lauryn and Kiela are impressed with Zaara’s ability to juggle multiple women at once. Zaara insists that all you have to do is be honest about your intentions and no one’s feelings will get hurt. For now, all Zaara’s interested in is a little no-complications fun.

Zaara finally links up with Bella and they make good use of their time making out in one of the club’s booths. Kim spots them and stops to confront Zaara. She’s understandably bothered that they were just making out and now Zaara’s tongue is “down someone else’s throat.” Zaara insists that she was honest with both of them about what she wanted but Kim interjects: the problem isn’t that she’s seeing other people, it’s that she’s messy about it. Bella agrees with Kim and they both leave Zaara high and dry.

Later, Zaara confesses her transgressions to Annika, who’s hurting from having been ghosted by her ex-boyfriend. They find themselves in the same boat: neither ready to confront the reasons underlying their decisions about relationships. For Zaara, that means she’s not ready to address why she’d rather juggle two women on the same night than emotionally commit to one long-term. Maybe they’re both just basic bitches, Annika laments.

I wish Zaara’s storyline didn’t veer so quickly towards monogamy. Not just because it feels a little too similar to a storyline this show already did with Nomi, but also: she’s young, she’s out…why not just let her have fun with different consenting adults?

Roswell 412: “Two Sparrows in a Hurricane” 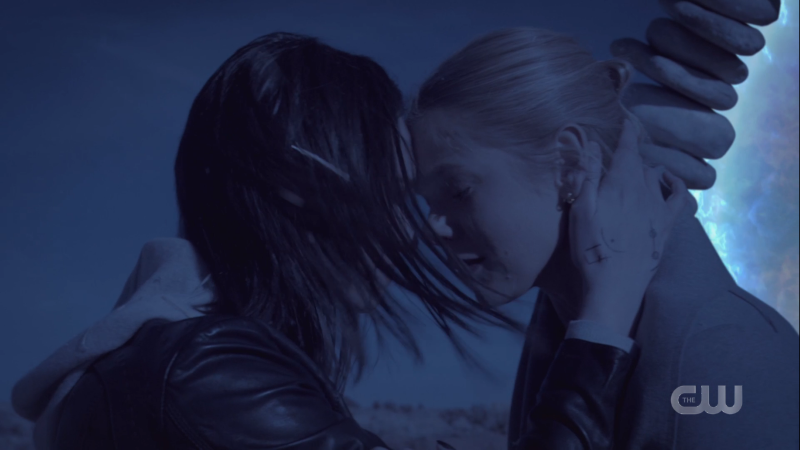 I 100% thought they were going to kiss here MY BAD

We almost got a gay alien wedding this week, but at the last minute Michael decides he doesn’t want to marry Alex in the upside down just because Alex might be dying, he wants to do it right and get home and keep Alex from dying at all. One by one the queer characters step through the portal into the collapsing dimension, but luckily no gays were buried on this day. Shivani tries to top the Pod Squad from succeeding, fueled by the desperate desire to bring her daughter back, but the only person who didn’t make it out was Isobel’s teacher, who thanks her for giving her the chance to save the children of the people she killed when she was under Jones’ spell. Tesca calls Isobel the fiercest warrior and presses her forehead against her favorite student’s forehead before getting taken by the storm.

Also I know me complaining about Isobel and Kyle is getting old but this week when Liz asked when they got together Isobel said it was a “long time coming” which is very annoying to me! Why are we invalidating Isobel’s relationship with Anatsa?! And I know probably it’s not that deep but it bugged me. Anyway next week is the season finale so hopefully we’ll actually get Allie and Shivani in the same episode! Science wives reunited, please!

Sometimes, as a TV critic, I wonder if I’m asking too much. I wonder if I’m too serious. I wonder if my expectations are too high or if I’m being overly critical of television that’s meant to be melodramatic. But then you get moments like this week on The Chi and it feels like I’m asking for the bare minimum: some consistency.

When we last saw Fatima, she kicked Victor out of her apartment. She was tired of being his secret — the one he hid behind tinted glass — and she was finally done. But this week, when we see Fatima, they’re back together. They’re being flirty but not affectionate but still. Nothing’s changed in the dynamics between them, but here they are, together, as if last week’s episode didn’t really mean anything…as if Fatima’s words don’t mean anything. That’s a narrative choice that the writers are making, which only serves to undermine the audience’s view of Fatima. And seeing as how they’ve already erased one black transwoman from this show, the writers ought to avoid undermining the one with whom they replaced her.

Fatima tells Victor that she’s coming to cover his campaign kick-off but, soon thereafter, will be leaving Chicago. She insists that she doesn’t have a reason to stay in the city and Victor protests, “I though we were building something.” Again, last week never really happened. Fatima notes that Victor’s building something and now she needs to go and find her happiness. Victor’s stunned (really?!) and questions whether this is truly it for them. Fatima repeats that she can’t spend her time waiting for Victor to find himself which is news to me because that’s all the character’s done for the last six episodes.

At his campaign announcement, Victor finally admits his relationship with Tierra has been a lie. He admits that he’s recently fallen in love and hopes that the community will get to know the real him on the campaign trail. Victor steps off the stage, embraces his friends, and then goes over and kisses Fatima in front of a clapping crowd. Again, I’d be more excited about this couple and their future if the show was, at all, invested in consistency.

Speaking of which, the last time Nina and Dre broached the issue of Lynae, Nina wasn’t certain about the the prospect of becoming a foster parent. Her marriage to Dre was still on shaky ground and she didn’t want to invite a child into an unstable situation. But between then and now, the couple has reconciled and they’re happy. This week, they approach Lynae with news: her adoption papers are completed.

Surely, these writers know the difference between adoption and fostering and aren’t using the words interchangeably, right? I’m left wondering: how did we even get here…from near divorce to bubbly happy, from fostering to adoption…how did we get here? Do the writers know? Do they even care?