During the heyday of The L Word, thousands of threads on dozens of forums pondered the great mysteries of the show: Were Bette and Tina soul mates? Had anyone on the writing staff ever even met a bisexual or trans person? Who killed Jenny? Only one of the major questions of those early lesbian aughts exists unanswered on the internet, and it’s as hotly debated as ever: What made every woman in WeHo so willing to put up with Shane’s bullshit? Similarly: Will that stereotype ever die? This week, grown-ish splashed into the conversation, offering guidance to their resident bisexual lothario, Nomi, in the form of gender studies professor Paige Hewson, played by — wait for it — Kate Moennig! 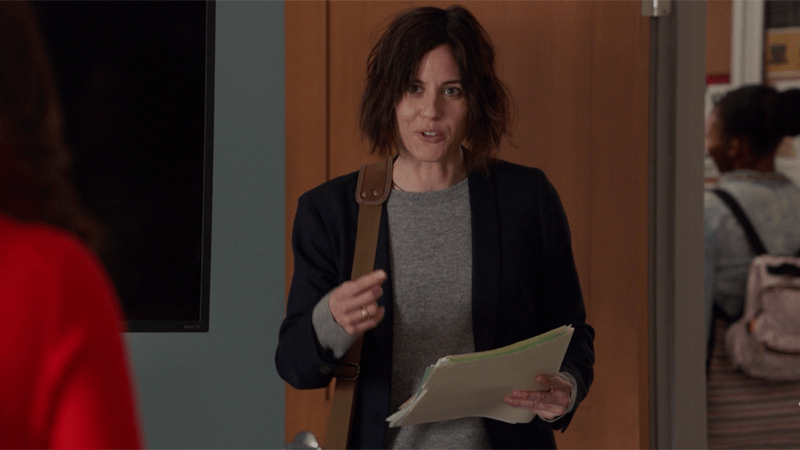 Welcome to How to Make a Shenny Fansite 101.

“Girls Like You,” which was written by queer woman Hailey Chavez, goes like this: Nomi and Zoey and Ana have moved in together, and it’s all-night brownies and Korean skincare and Bob Ross marathons, which Nomi keeps interrupting with a never-ending parade of straight girls she’s having sex with, loudly. “I knew Nomi was a player, but this is next level,” Zoey complains after another sleepless night. “Is homegirl starting a cult?” They sit her down to ask her to be a little quieter, but Ana’s more than annoyed about the lack of sleep; she thinks Nomi’s being kinda sexist and, like, why straight girls? “I get to forget them,” Nomi explains, “and they never — I mean, ever — forget me.”

It pushes Ana over the edge, so in their next gender studies class, after Professor Paige is finished explaining the sexism contained within a TwerkBurger commercial, Ana asks if women can also be misogynists. Paige says yes, if they’re actively working against their own gender, but she needs some context. Ana says, “Misogynists hate women and Nomi does nothing but love women loudly and repetitively in our apartment.” Professor Paige bounces right up out of that conversation.

Zoey just wants everyone to get along so they can get back to their nights of popcorn and hand-masks on the couch, so she takes Nomi out for a beer, but finds her processing plans interrupted when Nomi spots another straight girl thwarted by a dude on Tinder and proceeds to use her superpowers of being a woman (knowing how to listen to someone, ask questions they want to answer, sincerely compliment them, make eye contact, grow intimacy in the span of one cocktail, etc.) to seduce her. Zoey finally snaps and begs Nomi to at least tell this girl she’s going to ghost her. Nomi does and is shocked when the girl shrugs, “It’s not like I was going to take you home to my parents.” 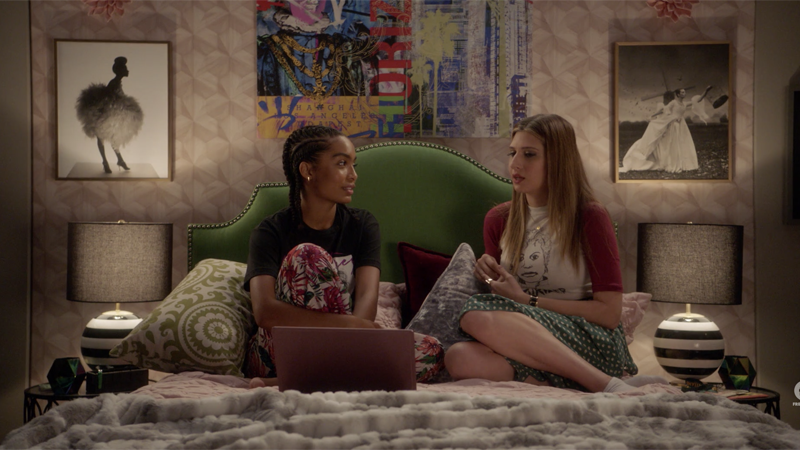 I love you but I cannot watch Carol again, I’m sorry.

It’s a record scratch moment for Nomi, who finds herself in Professor Paige’s office the next day looking for a little bit of mentoring. Professor Paige has excellent bi-dar, so she asks Paige, “from a gay woman to a bi woman,” if there’s a reason she doesn’t want to get serious with any of these girls. And yes, duh, it’s because if it’s not serious, there’s no feelings, and if there’s no feelings there’s no commitment, and if there’s no commitment there’s no bringing them home at Thanksgiving to her parents… who don’t know she’s bisexual. Professor Paige quirks her eyebrow and tilts her head to the side like a puppy and Nomi says, “Ohhhhh.” She’s impressed Paige got to the heart of it so fast; I’m impressed Nomi got more character development in 20 minutes than Shane got in six seasons. 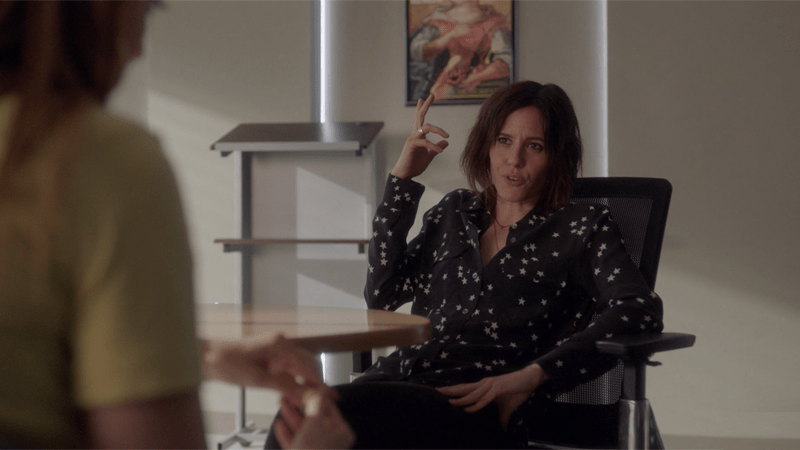 I love watching The L Word characters on modern day gay TV. I loved watching Leisha Hailey on Strangers help Isobel unpack her biphobia. And I loved watching Kate Moennig on grown-ish help Nomi unpack her own Peter Pan syndrome. Not just because it’s inspired in its irony, but also because the stark juxtaposition makes it easy to see how very far queer characters on TV have come in the last 15 years. In terms of how they talk and think about their sexuality, and how those things are portrayed. And also in terms of what these shows look like. It seems to me that grown-ish has more characters of color than The L Word managed to cast, in total, over the course of the whole show. “Are you out here Janelle Monae-ing in these streets?” is a real thing a real character said out loud on “Girls Like You” last night — and, pals, that is progress.

According to Freeform’s press releases, Kate Moennig is set to be a recurring character in season two. Maybe her next lesson will be to teach Nomi and Zoey and Ana how to make their brownies gay.