I realize what I’m about to say is completely sacrilegious in the Kingdom of Nerds — but, in the immortal words of Bitty, the three-legged Twitter kitten who won’t stop leaping onto and off of things, I do what I want. So: The best thing going in Geekdom right now are the animated TV shows where D-list characters lovingly clown on the revered source material. Like HBO Max’s Harley Quinn. And also like Paramount+’s Star Trek: Lower Decks, a cartoon that leaves the bridge and all the Captains and Commanders and Science Officers we’ve come to know and love in the ten billion other Star Trek iterations, and takes us on a journey into the lives of four low-level crew members who operate in the wibbly wobbly bowels of their spaceship. Season two finally gave us some gay maintext, and I’m so keen to see how season three, which landed last week, will pay that off.

Beckett Mariner, a human Starfleet junior officer whose mom is her boss and the Captain of her ship, is the queer in question. She defines her sexuality as: “Oh I’m always dating bad boys, bad girls, bad gender non-binary babes, ruthless alien masterminds, bad Bynars.” And, in season two, she goes full enemies-to-almost lovers with Jennifer “Jen” Sh’reyan, a female Andorian Starfleet command division junior officer whom she keeps running into and brushing up against and being rude as all heck to. “Look, I know we’re not supposed to have interpersonal conflict, but I really hate that Andorian,” Becket complains when Jen catches her doing cardio and strength training by running a Cardassian prison-breakout simulation. Later they smash into each other in the hallway and Jen says she doesn’t even think about Beckett, and Beckett says, “Yeah right, I bet you dream about me every night with your stupid little butt.” 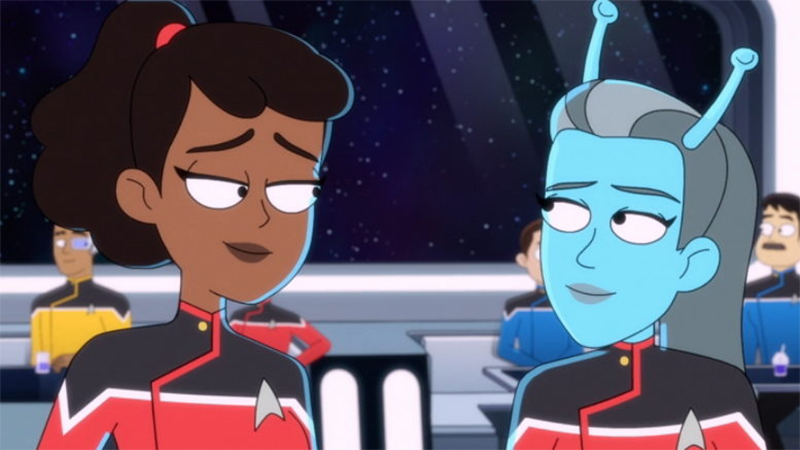 Of course, Beckett is like all the best bisexual badasses on TV: hard exterior, gooey caramel center. When Jen risks her life to save Beckett in the season two finale, Beckett sincerely thanks her and says that she just throws up walls all the time, especially at people she feels herself getting attached to, because being seen as a bitch is better than getting hurt. Jen says, “I’m hearing you say you like me,” and Beckett demurs, even though it’s very obviously true.

Between seasons, series creator Mike McMahan talked to io9 about their relationship. He said that romance isn’t really the main thing for any of the characters in the series, but he loves that Beckett is one of those characters who will run into the Big Bad of whatever episode and be like, “Oh yeah, I dated them.” And he wants to explore what it’s like when she does open herself up to other people. So! Beckett and Jennifer WILL be dating! “In the third season, she and Jennifer are seeing each other and there are stories we tell about that. What I would say is it’s not easy to date [Beckett] Mariner.” As someone who only falls for Beckett types, and whose wife is a total Beckett type, I feel it is my responsibility to add: But it’s so worth it!

Star Trek fans have, of course, been latching onto the series’ queer themes from day one. Kirk and Spock were the original slash pairing and the origin of modern fan fiction. And the series began having conversations about race and gender all the way back in the beginning, in 1966, decades before most TV and films were willing to even hint at diversity. (Martin Luther King Jr. famously convinced Nichelle Nichols to keep her role as Lt. Nyota Uhura because it was the first non-stereotypical role for a Black character and a woman character on TV.) But it’s only been in the past five years that the show has finally leaned into having LGBTQ+ characters, starting in 2017 with Discovery, which boasts a total of five queer characters, including Tig Notaro’s Jett Reno. In 2020, Picard finally confirmed a decades old fan theory that Seven Of Nine is pansexual. If I’m calculating correctly, Beckett Mariner is the first queer woman main character in the Star Trek universe. 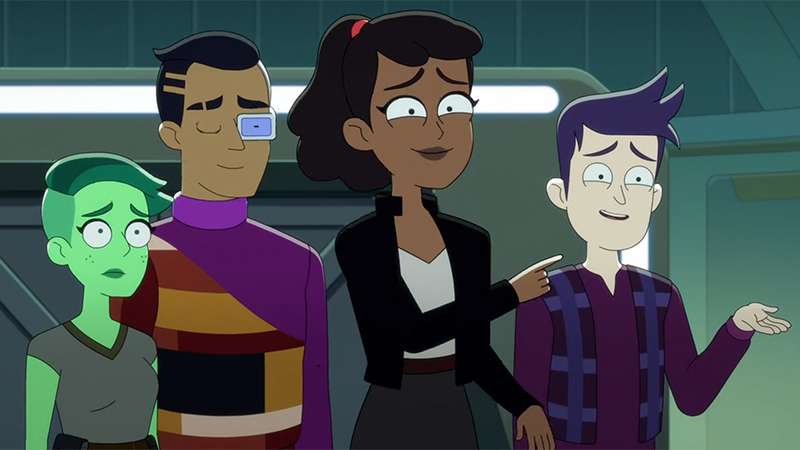 So far, season three hasn’t given us any Jen, which does make sense. The first episode has to get the crew of the USS Cerritos out of legal trouble and back in space. The second episode, which just landed today, is all Dungeons and Dragons. Which, you know: queer in its own way. But I’m excited for what’s to come. Beckett is one of those rare characters whose queerness radiates off of them even when they’re not shown in a relationship. “You know what?,” Beckett says to her archenemy boss in season one. “I do get off on breaking protocol. I’m good at exploring strange new worlds, solving space mysteries, and kicking asses. Protocol is for people who need to be told what to do, which I don’t.”

And if that isn’t the gayest thing I’ve ever heard, in this or any universe!