The Pretty Little Liars mid-season, summer finale is here! Tonight at 8/7c, after four and a half season on the run from A, the girls jump in a helicopter and visit a new theme park full of dinosaurs who eventually run amok and eat the girls as they cower in various outhouses! Just kidding, they’re still trying to figure out who A is, but someone is going to die in this episode. (None of the promotional materials has specifically indicated the non-involvement of T-Rexes, so one can assume they are the cause of death.)

The good news is that I’ll be here with you through whatever kind of pressure-cooker this episode turns out to be! Listen, I’m giving you everything, all that joy can bring, this I swear, and all that I want from you is a promise you will be here at 8/7c to hang out and liveblog this with me.

With Alison leading them down a dangerous path and “A” barring them from telling the police the truth, Aria, Emily, Hanna and Spencer feel trapped and are desperate to find a way out of this mess. With nothing else to lose, could the PLLs lose everything by putting their faith in a possibly untrustworthy ally?
Meanwhile, Alison begins to build up her own army now that the PLLs have turned their back on her.

There are also rumors that Paige is going to be heavily featured in this episode, which I feel great about. I mean, the press release promises “Paige posing next to a plastic snowman and looking super adorable,” which is confusing but encouraging.

Who knows, maybe the person who dies won’t be queer and/or a person of color! Let your imagination run wild, it’s possible.

7:38 p.m.: I finished my popcorn watching the tail end of the ABC Family #PLLMarathon. Last week’s episode was so gay, you guys. I bet Mona dies this week, though.

7:51 p.m. My stream froze, and when it came back, all I heard was “life doesn’t stop for a UTI,” which was part of a commercial, unfortunately, despite how much it sounds like something Spencer would say.

7:57 p.m.: Ok, so where we last left off, Spencer, Emily and Aria deduced that Ali was going to go to the police “to tell them everything,” or at least her version of everything. The gang is fucking finally turning against her. Hanna was listening to Caleb describe the series finale of Ravenswood, which was a snoozefest. EVERYBODY GET EXCITED FOR SOMEONE TO DIE, I GUESS??

8:00 p.m.: Well at least we know what time of year it’s supposed to be, although that’s the warmest Pennsylvania Thanksgiving I’ve ever heard of.

8:01 p.m.: Wait what the fuck is happening, if Spencer is dead I will throw up all over my computer.

8:04 p.m.: So clearly Mona is related to that creepy guy from this season of American Horror Story re: dolls. Also are we supposed to think Ali’s real name isn’t Ali, was that the implication? Also, “Alison Lauren DiLaurentis” is right up there with “Jerry Gergich,” tbh.

8:09 p.m.: Mona called someone on the phone and said “send out a Code A, she’s plotting something big,” which supports this really intense theory I read on Tumblr about how Hanna is A. I’m super into that idea, even though I don’t really believe it.

8:11 p.m.: Commercial break! Have you looked at the cast of Dolphin Tale 2? It’s surprisingly robust. I’m not going to watch it, don’t worry.

8:15 p.m.: Holy shit, this just got so real. Emily’s line about saying that Ali is A outloud is clearly a callback to Paige saying, “If I say it, out loud — if I say ‘I’m gay’ — everything is going to change,” way back in like, season 1 or whatever, which is even more heartbreaking when it comes with the realization that Alison never loved her. My heart can’t stand this. Also in this scene, Mona assigns them all Hogwarts houses! Jk, she assigns them all main attributes that Ali took advantage of: Smart (Spencer) [Ravenclaw], loyal (Emily) [Gryffindor], admiring (Hanna) [Hufflepuff] and compassionate (Aria) [also Hufflepuff because Ali is all the Slytherin anyone could need].

8:17 p.m.: PAIGE! What a babe. Godddddddd, Paige “I’m tired of talking” McCullers. What a smooth operator, kissing Emily like that. She smiles like a cowboy.

8:19 p.m.: Fucking gross, Spencer and Toby. Fucking gross. We don’t need their heterosexuality shoved down our throats. Also, all this cop stuff is wigging me out.

8:20 p.m.: So Mona and Lucas are working together to take down Ali and her army, but things aren’t going as smoothly as usual? So Mona definitely isn’t A because A never fucks up. That’s like, A’s whole thing.

8:24 p.m.: *Buffy spoiler* OH SHIT YOU GUYS KNOW WHAT I JUST REALIZED? Remember what happened as soon as Tara and Willow got back together?

8:25 p.m.: I wonder what the significance of doing a holiday special right now is? If the answer is anything that isn’t “so Paige and Emily can make out under the mistletoe,” I’m quitting. 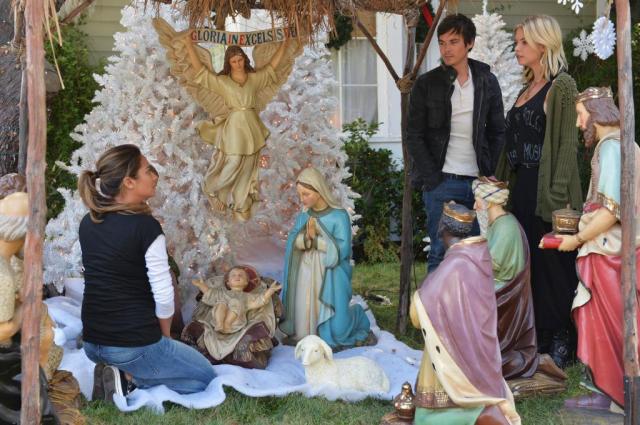 It almost looks like they’re in LA in the spring and now Rosewood in late autumn. Huh.

8:28 p.m.: So Emily’s dad comes home every Thanksgiving, which is why Emily is so into the holidays, and since she outlined what normally happens, there’s absolutely no way that’s going to come to fruition. :(

8:28 p.m.: The Scooby Gang is watching the tape of Ali’s testimony (acquired by Mona). She accuses Spencer of killing Bethany, in a roundabout way, by talking about how Spencer was on drugs and would’ve done anything for her.. Womp womp. “I didn’t have anything to do with Bethany Young’s murder,” she says, so clearly that’s a lie.

8:31 p.m.: Apparently the liars are calling their significant others “bed buddies,” which I hated when they said it and then immediately loved.

8:33 p.m.: The cops no longer think that Ali killed Bethany! Yay! Instead they think that Spencer killed her to “gain clout with the group’s leader.” No! DON’T WORRY, Emily says “we’re going to stick together,” because that’s “what they do.” As clearly illustrated by something not included in this season, I guess.

8:35 p.m.: Caleb is doing movie hacker typing! Omg, remember when his #1 personality traits were that he was good at computers and slept in the ventilation ducts?

8:36 p.m.: Spencer and the Scoobies are breaking into Radley! AGAIN! Those crazy kids. How is it that they still haven’t beefed up security there? Why doesn’t anyone question high schoolers dressed as nurses? Is it because they look like they’re super old? WAIT I JUST LOOKED IT UP, the actress who plays Mona is 25, and the actress who plays Spencer is 28. Good god, no wonder teenagers have all sorts of body image issues. 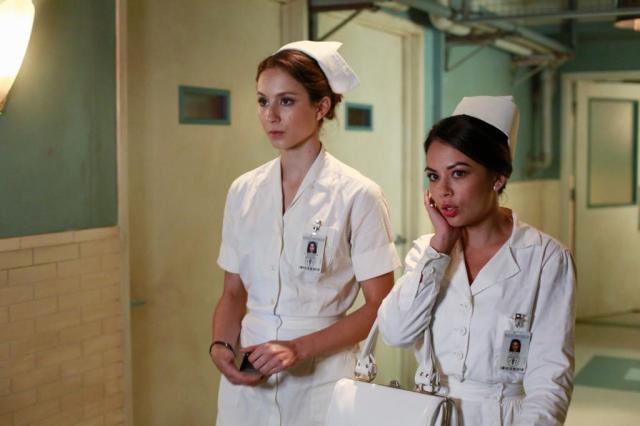 8:39 p.m.: Ok well first of all how DARE Ali ruin a perfectly good Paige/Emily phone conversation. Second of all, the tiny little smile Ali does when Emily says “I don’t want things to be like this” made me scream at my computer. Fuck that forever. I just want Emily to have nice things.

8:44 p.m.: This cop whose name I don’t remember has definitely take a page from Tanner’s playbook with the whole “one more thing” business. I want the cops to put it all together, I am officially #teamcop, but only w/r/t this show because I want the games to stop.

8:46 p.m.: Fuck, Ali is gonna murder Emily right here in her bedroom. I can’t believe she has the nerve to get upset at Emily for lying to her after all of this shit! Seriously?

8:47 p.m.: Oh no Paige, don’t be alone ever in the episode where someone dies! GET YOUR SHIT TOGETHER. Although cute car.

8:47 p.m.: Spencer and Mona are a terrifying team, so of course they’re the ones who discover that Ali knew Bethany. I hope they make out soon. And by “they” I mean Spencer and Mona. Or Ali and Bethany in a flashback. Or I guess any two women.

8:49 p.m.: OH NO OFFICER TOBY! But that’s not how whoever died died. Also obviously it’s too early in the episode. This is a red herring for sure.

8:53 p.m.: So Toby is fine but in a cast, and Paige found out that Ali is building an army, officially. Maybe she’s just really good at making friends, you guys! Maybe!

8:54 p.m.: Oh no, Spencer is arrested for Bethany’s murder! But she’s rich and white and a woman so she probably won’t go to jail even if she did it. #OITNBseason3

8:56 p.m.: Ezra is nonplussed by Spencer’s arrest, because he’s a super rich, straight, young white dude with a good haircut. But Aria is worried because of friendship! She soon gets a phone call from Mona telling her that Alison lured Bethany to Rosewood and away from Radley because she knew about the affair between Ali’s mom and Bethany’s dad.

8:58 p.m.: Yep, Mona is a goner. A black, hooded figure with blonde hair, presumably Ali but who can really say, is the one who stabbed her. There wasn’t a body, though, so IS SHE REALLY MURDERED? MAYBE SHE’LL TURN UP IN SOMEONE ELSE’S GRAVE? HAVE YOU EVER SEEN STRANGERS ON A TRAIN?

8:59 The first A cutscene is A stealing Emily’s baby Jesus and replacing with with a Mona doll, which means Mona died for our sins, probably.

8:59: Nevermind, Mona is really murdered. Sorry, handful of people who shipped Mike and Mona. What was their ship name? Mina? Moke? Eh, who cares.

9:01: I don’t know what show just started, but I hate it. It looks like Big Bang Theory crossed with Just Shoot Me, which is a real shame because I love Wendie Malick on that show.