Welcome to the twenty-fourth installment of More Than Words, where I take queer words of all sorts and smash them apart and see what makes them tick. Every week I’ll be dissecting a different word, trying to figure out where it came from, how it has evolved, where it might be going, and what it all means. It’s like reading the dictionary through a prism. Feel free to send word suggestions to cara@autostraddle.com.

A few weeks ago on More Than Words, I started writing about the word “feminism” — how, after a near-lifetime of using the word as a self-identifier, I thought I knew what it meant, and how the refusal of other smart and thoughtful people to take on the title had made me not so sure anymore. I went back to mid-19th-century France, where the first féminismes fought for, and won, legal and cultural victories, despite not always agreeing on, well, anything. But I figured this disagreement would sort itself out going forward—at some point, there must have been some cosmic alignment of principles, right? Some massive meeting or skywriting session that helped everyone nail this down?

THANKS FOR NOTHING, AMELIA

Turns out that — surprise! — it’s a lot trickier than that. For decades, individuals and groups within the movement have struggled with the term, and the different types of baggage with which it has become loaded. Outsiders have always complicated things by throwing their own villainizing portrayals into the ring. And even feminist scholars are constantly asking how, exactly, to characterize their own discipline—whether it’s desirable, or even possible, to retroactively define people and ideas as “feminist,” how the decisions historians have made about this have shaped (and continue to shape) discourse, and how best to deploy such a word today.

“Feminism” first shows up in the Oxford English Dictionary in 1895, defined as “advocacy of the rights of women (based on the theory of equality of the sexes).” As an amateur etymologist I put great faith in the OED, given as it is to succinct definitions and lists of citations from works that are fairly accessible to me and my English-language-based-and-biased library network. But in this particular case, its relentless English-ness was more narrowing than helpful. In her 1988 paper “Defining Feminism: A Comparative Historical Approach,” Karen Offen argues that the construction of feminism preferred by the OED and most other dictionaries, with its prioritizing of “political, legal, and economic rights equal to those granted men,” fails to reflect many of the concerns and causes of actual pioneering feminists, especially those from countries other than Great Britain and the United States. For example, 20th-century German feminists didn’t talk about “equality” or “rights” much at all, but still used the word (same with mid-21st-century feminists from all over, according to this summary of an international women’s conference — as of 1976, “the aspirations of American feminists are not really shared abroad”). Ellen Key, a Swedish feminist active around 1900, was a suffragist but focused most of her energy on obtaining state support for mothers rather than legislative equality. If we want to define feminism’s goals based on what they were originally, even in the abstract, we get stuck in webs of contradiction on day one. 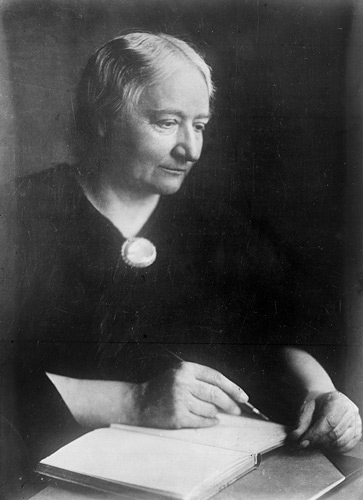 The one thing that does seem constant about the word—that it’s always been, in some way, dangerous to established powers—has also always undermined attempts to strictly define it. The term “feminist” was first translated into English by the Paris correspondent for the British Daily News, which described the movement as “dangerous.” As the label spread inter and intra-nationally, people who were afraid of its implications continued to “use the term polemically, as epithets rather than analytically” (though it was always the ideas that were dangerous, never just the name—Queen Victoria famously spoke of “that mad, wicked folly of Women’s Rights,” saying that “were woman to ‘unsex’ themselves by claiming equality with men, they would become the most hateful, heathen and disgusting of beings and would surely perish without male protection”). Things were confusing enough that by 1938, even Virginia Woolf, ardent supporter of Rooms Of One’s Own and Buying The Flowers Yourself, wrote vividly, in Three Guineas, of burning it:

“What more fitting than to destroy an old word, a vicious and corrupt word that has done much harm in its day and is now obsolete? The word ‘feminist’ is the word indicated… let us write that word in large black letters on a sheet of foolscap; then solemnly apply a match to the paper. Look, how it burns! What a light dances over the world!” 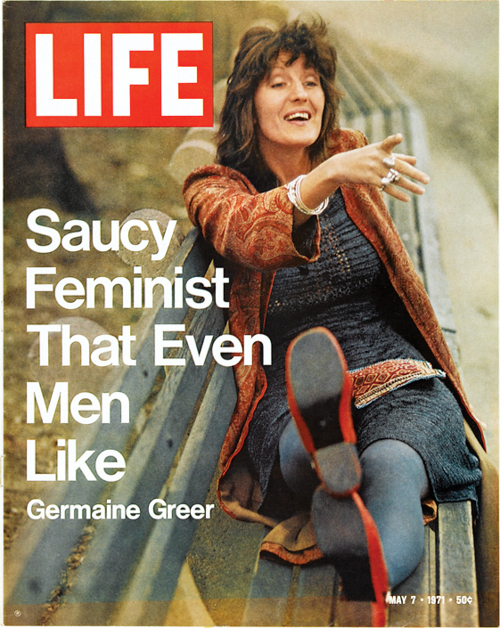 HERE’S HOPING SHE SAUCED ALL OVER THEM

If Virginia Woolf wasn’t calling herself a feminist, a broad historical definition probably doesn’t work. So what else can we try? In her recent paper “What’s In a Name? On Writing the History of Feminism,” Claire Moses describes, and problematizes, strategies that have traditionally been employed by scholars, many of whom retroactively describe historical groups and actions as “feminist” when they didn’t identify themselves that way, often because the term was not yet in use. But, Moses asks, “if we label some activities and not others as feminist, are we not constructing—rather than identifying—feminism?” And isn’t this a recipe for shoring up the status quo? For example, say we look at American women’s collectives in the 19th century (before the word “feminism” was technically born), and apply the label exclusively to upper-class white suffragists, because their social position and particular cause was more conducive to the kind of record-keeping that is useful to historians. And let’s say we fail to apply the word, or give much attention generally, to “the efforts of Black women who, in the years following their emancipation from slavery, created organizations intended to overcome the indignities of racism? …[or] to the efforts of women industrial workers to improve their conditions of work?… [or] to the power exercised by American Indian women in tribal councils?” As anyone who has ever opened a history textbook can tell you, this is what has happened. Narrowing the narrative in this way falsifies it unforgivably, leaving out vital histories and stories and perpetuating awful power structures. So this method of “assigning” feminism not only fails, it’s actively harmful.

So what if, as historian Nancy Cott suggests, we only call a feminist a feminist when she identifies as one? After all, why risk policing someone’s political identity? If we do this, a very different picture of feminism emerges, as do a lot of other adjacent and similarly shifting identities. In the years between 1920 (when women’s suffrage was ratified) and 1960s, few Americans called themselves feminists—those who did “supported an Equal Rights Amendment and felt that gender was socially rather than naturally shaped.” Other people who were fighting for what we would might call “feminist” causes actively didn’t identify that way. After JFK was elected in 1960, women with ties to his administration and the Democratic Congress fought and won a lot of pioneering legislative battles, especially in education and employment. Meanwhile, other women—often younger and more progressive ones, with roots in civil rights or anti-Vietnam movements—organized in smaller, more informal groups, and tackled more insidious, pervasive problems. As Moses puts it, “their goal was to point out that questions that Western governments traditionally refused to address—questions, according to these governments, that were “private” matters—were the very basis of male power.” This group originally called themselves the Women’s Liberation Movement, but eventually adopted the term “feminist,” possibly because it was catchier. It was so catchy, in fact, that by the 1970s, the other, more mainstream group was using it as well: “However it happened, the mid-1970s… was the moment in history when use of the term “feminist” seemed acceptable to the largest group of advocates for women’s equality, even though their views often differed sharply.” 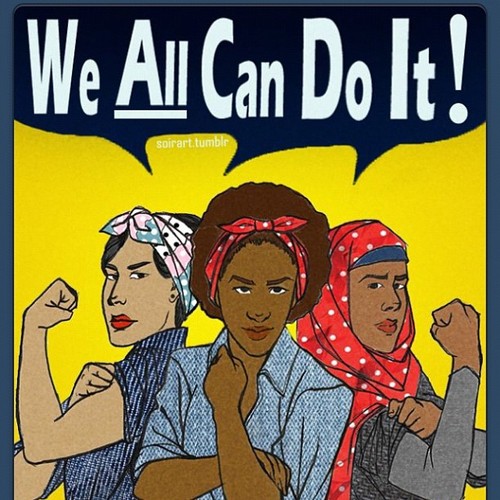 Moses goes on to wonder why, in the years since, people have started to disavow the word. She talks about her students, who seem to hold “feminist” views but often don’t identify with the label. People ask this all the time — I did a couple of weeks ago (it’s the reason I decided to research this at all), and the other day Jezebel posted a list of “misguided reasons” celebrities give for not calling themselves feminists.  There are many misguided reasons, sure, but there are also totally valid ones, rooted in the historical, narrative, and definition-related issues raised by Offen and Moses.

So to think about the question I asked myself at the beginning of this project — why do other smart and thoughtful people refuse the label “feminist”? — it seems like the answer may be rooted in the fact that as the label feminist has refused many smart and thoughtful people at its doors. Plenty of women who don’t see themselves or their community values reflected in a movement that can frequently privilege white cis experiences instead embrace movements like womanism, a term coined by Alice Walker in her 1979 short story “Coming Apart.” In her collection In Search of Our Mother’s Gardens, Walker defines womanism as:

“A black feminist or feminist of color. From the black folk expression of mother to female children and also a woman who loves other women, sexually and/or nonsexually. Appreciates and prefers women’s culture. Committed to survival and wholeness of entire people, male and female.”

For other people, feminism is a label that can fit, but only with a modifier. For instance, writers like Gloria Anzaldúa and Cherríe Moraga, authors of This Bridge Called My Back, have advanced the conversation on Chicana feminism, or Xicanisma. Moraga describes Xicanisma as inherently intersectional:

“A theory in the flesh means one where the physical realities of our lives-our skin color, the land or concrete we grew up on, our sexual longings-all fuse to create a politic born out of necessity.  Here, we attempt to bridge the contradictions in our experience.
We are the colored in a white feminist movement.
We are the feminists among the people of our culture.
We are often the lesbians among the straight.
We do this bridging by naming our selves and by telling our stories in our own words.”

If popular narratives of feminism choose to ignore international opinions and deprioritize the work of women of color, that leaves room for modern “feminist” thinkers and outlets and popular conceptions—like NY Times Bestseller-List level popular conceptions—to do the same without thinking twice. If feminist history isn’t intersectional—if the very dictionary definition, and how we’ve charted its development, isn’t intersectional—maybe it’s time to rethink that definition. Especially as the word seems to be on the upswing again — a recent survey by Ms. Magazine recently found that 42% of women under 30 identify as feminist, the most of any age group.

Melaine Randall has said that “the day we start defining feminism, it has lost its vitality.” I’d parry with “the day we start defining feminism, we get an enormous headache and end up subjecting readers to like 1500 words of confusion, because it is impossible.” But as with other impossible things, a good-faith attempt can only educate us. And good education can make sure we don’t continue to make the same mistakes.