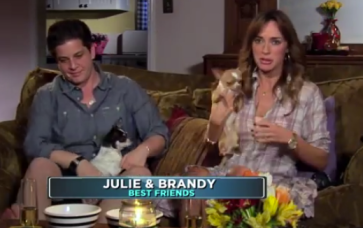 Bravo has brought us some of the finest coverage of C-List celebrities I’ve ever seen. I should know, because I watched every episode of Don’t be Tardy featuring Kim Zolciak. You would think that this network, given what it’s chosen to continue airing, would continue to air The People’s Couch, Bravo’s latest series, which was on a limited run and ended far too soon. Even the good people of Television Without Pity liked it, and they watch television without pity. Aymie Telinski declared in The Northern Star, “Bravo should reupholster the short-lived “The People’s Couch” because viewers connected to the taped show-watchers…. I never realized how much of what I’m saying to the television others are also saying.”

The People’s Couch lets you watch incredibly funny people watching popular shows, and gives you their commentary as it’s all happening — it’s like getting to watch your favorite Autostraddle recapper in real time. Obviously it features In Your Box Office stars Julie Goldman and Brandy Howard, because they’re better at hilarious commentary on dubious media than anyone else on earth. The concept is brilliant. This American pasttime of slinging insults at stupid people on television is especially enjoyable when you can watch people who are funnier than you do the commenting. My best friend and I always wanted to be commentators on I Love the 90’s in high school, but I think it’s best for everybody involved that we never got an audition.

The commentators on TPC include best friends, roommates, sisters, couples and entire families. The stand-out commentators are Julie and Brandy, obvs. However, sisters Amanda and Kenya never fail to entertain, best friends and roommates Emerson, Scott and Blake deliver many gems and Reza from The Shahs of Sunset pulls through as a true wild card. Another favorite of mine was the Egbert family – mother, father and sons Sam and Jake make for a hilarious combination of opinions.

Bravo describes TPC as the show that goes “inside the homes of real Americans to get unfiltered reactions to this week’s buzziest shows.” I like to think that their comments were edited together to make it sound like all of these people are actually conversing with each other in the same room. I don’t know if Bravo did do this on purpose, but hey, I did:

Untold Stories of the ER

This episode was about a stripper who got a shoe shoved into her cheek, seemingly by another stripper who shows up in the hospital at the end. I tend to agree with commentator Jill Blanda when she says, “that’s not real!”

Girl with shoe in face: (shows panties) Want some of this? You’re gonna have to pay!
Brandy: She’s going to solicit sex in there?! “I’ll fuck you and give you a free lap dance!”
Girl with shoe in face: I have to get back to work, can you get this thing out of my face!?
Kenya: And she got an attitude!
Girl with shoe in face: (to a hospital employee) Well whatever you are, you’re cute!
Scott: That is a girl with a heel in her face and she is still trying to get herself a doctor. A-to-the-fuckin-men, girl!
Brandy: I’m going to be this girl for Halloween…. She should get nominated for an Emmy for this.
Girl with shoe in face: You just yanked it out? My bouncer at the club could have done that. I thought you would have operated or something!
Brandy: Yes, bitch! You could have pulled it out yourself at the strip club!
(The other stripper is there to get her shoe)
Kenya: I know this girl is not coming to the hospital looking for her other shoe!
Amanda: Girl, shoes cost money!

First and foremost, you really need to hear Julie’s impression of Abby. Watch out for it at 2:17.

Abby’s dance competition is essentially held in The Thunderdome:
Kenya: They’re cracking the whip on these kids! They’re sending these babies home!
Emerson: It’s Lord of the Flies with rhinestones and jazz hands.

Two realtors named Josh basically battle it out on this episode for the same business. When they meet on the show, the following comments ensue.

Jill Blanda: Uh oh! The two Joshes! Turn it up, Bob.
Brandy: We’re in dueling vests! We’re both named Josh!
Julie: They hate each other and it’s so good!
Emerson: I love the way they pretend to be nice to each other, “That’s a cute vest. I wanna cut you.”

(On an impending argument between the Joshes)
Emerson: They’re gonna rumble!
Scott: Or kiss.

(After one Josh smacks the other Josh)
Brandy: That was like Housewives style.

As he walks across a tightrope blindfolded:

Reza: I wouldn’t do that for all the hamburgers in… wherever the fuck.
Brandy: For how much money would you do this…
Julie: No.
Momma Egbert: He’s the fearless flier.
Sam Egbert: That’s the Trader Joe’s newspaper.

Do yourself a favor and watch this entire segment.
https://www.youtube.com/watch?v=ypFG0IJqeXk

Julie: Whaaaat?! Bronies? Who wrote this? My mom?
Reza: I don’t understand what’s happening yet.
Sam: It’s like bro plus pony because they’re guys that love My Little Pony.
Bradly-Redd daughter: I want to know if they’re watching My Little Pony with a bottle of lotion next to their beds.
Brandy: Even the My Little Pony telling us the story looks like a perv… I think you should go now. I want to watch My Little Pony alone.

Lyle Gilpatrick: Before I watched the show, I was sad and lonely. When I did watch the show, it opened up to this huge community – because the community is so accepting.
Amanda: My Little Pony is saving lives!
Kenya: It really is. It’s surprising me. I’ve got to watch this.

Blake, Scott and Emerson: We cannot become bronies!
Emerson: I’m all for being gay, but that’s too gay.

Reza: Where are the ponies!?

Indeed, Reza. Where are the ponies? That is the question of our generation. It may be that if there’s enough demand for more TPC, Bravo will realize it’s in their best interest to bring it back into our lives. And for now, at least we got to see Julie and Brandy drinking wine and going HAM on some pizza on national television. The universe loves us, queers!

Christine Horvath is a bad bitch who refuses to sing the made up “So good’s” in “Sweet Caroline.” You can find her at www.bawdybynatureblog.com.

Christine has written 1 article for us.