Welcome back to the the Coterie and Good Trouble’s Season 4B premiere! This is Autostraddle’s Good Trouble 410 Recap, and moving forward you can find Natalie recapping Good Trouble every week, on Fridays, right here on Autostraddle[dot]com!

For a while, in Good Trouble‘s midseason premiere, you’re reminded of what this show does best.

On her way to work, Malika spots Luca, Davia’s burlesque dance partner, sitting on a street corner. He’s been back on the streets since Kelly chased him out of the Coterie, digging in dumpsters and tucking himself beneath the building overhang to escape the elements. He watches his back for Ivan, the menacing stranger that constantly harasses him, and works to save enough money to get a bus ticket to anywhere else. Malika stops to buy him a coffee, recalling when Alice did the same for her. 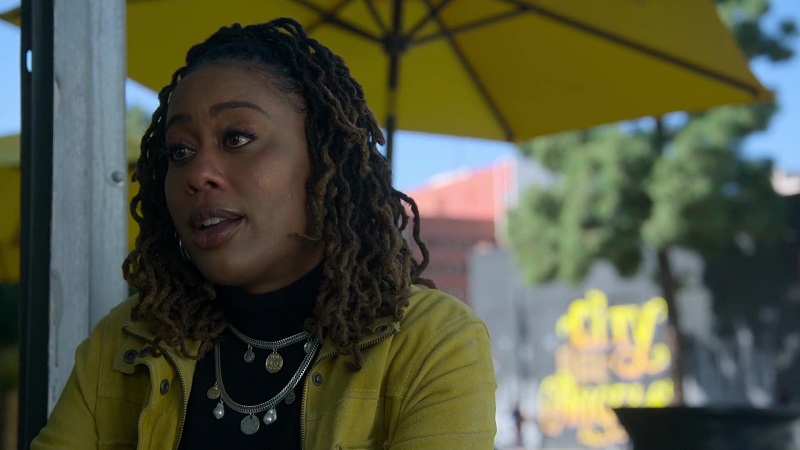 Malika’s in a good spot now. She’s got her degree, a great job, a supportive family — both chosen and biological — and a stable relationship (more on that in a minute). She’s good…but it wasn’t always that way. She’s just a few years removed from being where Luca is: unhoused on the streets of Los Angeles. She recalls living in her car and, serendipitously, parking near the Coterie. She began chatting with Alice and they got to know each other. Eventually Alice started bringing her coffee and, eventually, she let Malika use the Coterie showers. Ultimately, though, Alice would subdivide her loft and offer Malika the one thing she needed the most: a home.

The show flashes back to that moment: of Malika, carrying everything she owns on her shoulders, walking into her loft for the first time. She moves gingerly, as if she doesn’t fully believe what’s happening, and listens as Alice explains how the new loft came to be. Malika surveys the room and looks back at Alice in total disbelief. Finally, the tears flow and Malika wraps Alice in a tight hug, whispering her thanks. Without that moment, Malika wouldn’t be the person she is today. Having a safe place to come home to meant that Malika could stop focusing on how to survive and redirect her energies towards learning how to thrive.

“Yeah, that’s not the story for most people out here,” Luca admits.

Malika knows how improbable her story is but pushes Luca to imagine it as his own. All he has to do now is to accept the help that’s being offered to him. Malika understands, that it’s not an easy choice — he’s likely been failed by the same systems that failed her — but she encourages him to say yes to being helped. It’s a conversation that only Malika and Luca could’ve had and, no matter how well-intentioned Davia’s been, Malika is likely the only one who could’ve persuaded Luca to become a part of their intentional community. The next morning, Luca interrupts breakfast and accepts the invitation to stay. The entire Coterie family is there to welcome him.

The scenes are some of the most affecting of Good Trouble‘s run. It is the show at its best: organic, character-driven storytelling, buttressed by strong performances from its talented cast. It’s the type of storytelling I’d hoped to see more of in the second half of the fourth season and to the show’s credit, it does seem to be focused on doing that. How successful the show’s attempts are, though? Still TBD.

Joaquin’s burgeoning situationship with Mariana helps ground his character even as his search for his sister — who, I guess, is being trafficked or in a cult — remains tonally out of sync with the rest of the show. Isabella’s in therapy which will hopefully offer more insight into what drives that character and make her feel less erratic and/or less like a plot device. Davia’s foray into burlesque is over and now she’s returned to teaching, becoming a private home school teacher. Does it still feel like a far cry from the diversity, equity and inclusion work that underpinned her Teach for America stint? Yes, but I’m hopeful that her interactions with Elliot will help Davia grow in new ways. Hope springs eternal, right? 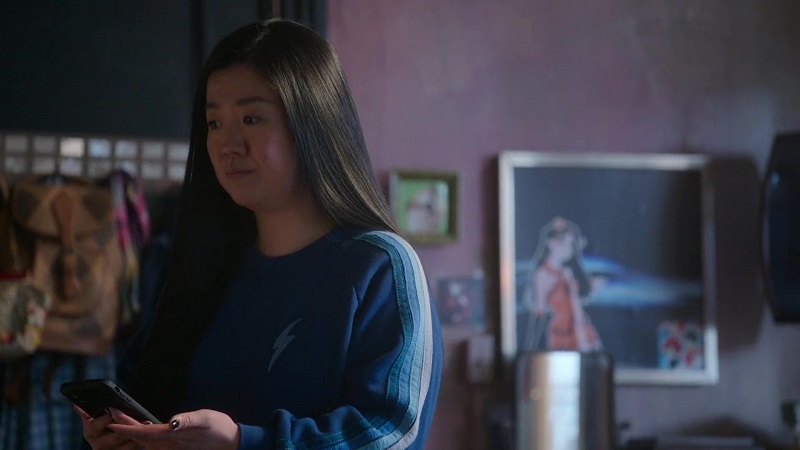 After grappling with the traumatic anti-Asian attack against her, Alice is finally ready to resume her comedy career. She meets with a prospective agent — one recommended by Margaret Cho — who envisions a bright future for the young comic: time on the biggest stand-up stages, commercials, a comedic role in a movie and, eventually Alice’s own stand-up special. But when the agent isn’t as responsive to Alice as she’d prefer, Sumi steps up and volunteers.

“Look, Kwan, all you really need is someone who believes in you enough to take calls and not take no for an answer and that someone is me!” Sumi entreats. “Come on, what do you have to lose?” Famous last words, right? Because the first gig Sumi secures for Alice is at a local pet adoption event where they pay her in cat…which Alice is allergic too. The second gig Sumi gets goes over equally well with Alice: a show at a retirement community in the valley.

It’s a much lighter touch to Alice’s story than what preceded it and it’s a welcome shift. Hopefully, over the remainder of the season, we’ll see Alice’s career start to take off again and her relationship with Sumi continue to blossom.

Malika, however, might not be so lucky. I’d hoped after breaking up with her unsupportive boyfriend, Malika would be able refocus her energy on her relationship with Angelica — perhaps taking that trip to Yellowstone that they’d talked about — but, apparently, the break-up just stokes Angelica’s anxiety about being in a relationship with someone who’s polyamorous. After spending the night at the Coterie, Angelica questions whether Malika’s open to another relationship. Malika admits that she might be open to it but when she tries to find out what Angelica’s thinking, she changes the subject and encourages Malika to get ready for work. 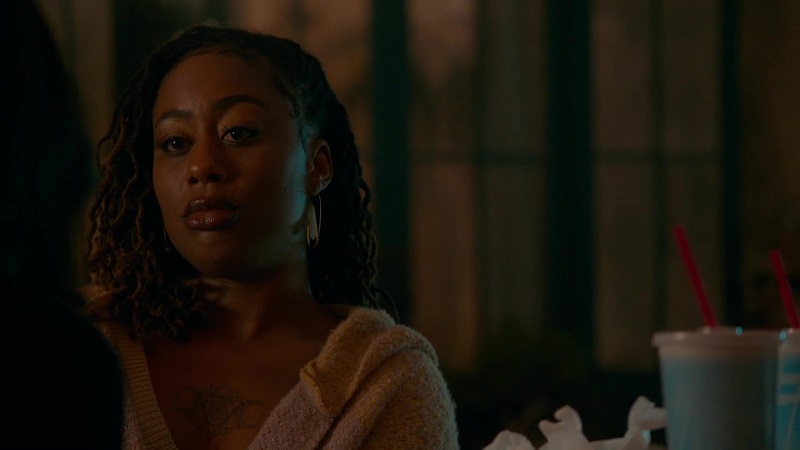 The next time that couple connects for a date on the Coterie rooftop, things are going well until Malika invites Angelica out for dinner on Saturday and Angelica has to decline the invitation: she has a date…with someone else?! Angelica insists that because Malika’s poly, she can’t really be bothered by the thought of Angelica dating someone else, but Malika pushes back. She notes that if Angelica intends on staying monogamous, this date could potentially lead to the end to their relationship. Angelica acknowledges that that’s a possibility but downplays its likelihood. The revelation injects so much tension into their date that the storm that interrupts it feels like a welcome reprieve.

The whole thing is, admittedly, jarring. Has Angelica always been tepid about Malika’s polyamory? Yes…so much so, in fact, that I doubted their relationship would last. But everytime Malika’s been anxious about Angelica’s feelings about her being poly, Angelica’s always responded the same way: with a promise to communicate. This isn’t communicating. This is Angelica telling Malika about a decision that she’s already made based on fears that she hasn’t bothered to tell Malika about.

Another thing that’s jarring? Malika admits her frustrations about Angelica to Davia, instead of taking her dyke drama to Alice. This episode really showcased the depth of their friendship and highlighted the importance of talking to someone who shares your experiences, so Good Trouble not having Alice and Malika talk about her relationship with Angelica feels like a real missed opportunity. Thankfully, though, Davia gives Malika some good advice — some “do as I say, not as I do” advice — and encourages her to not to sit back and let Angelica get away.

“If you want to be with her, you gotta go fight for her,” Davia advises.

Malika takes her advice and heads to Duoro to tell Angelica how she feels…only to walk in just as Angelica’s kissing another woman across the bar (it’s hard not to parallel this to when Lucia walked in and caught Angelica and Malika doing the same thing). It’s another jarring moment for me because, whatever her misgivings about Malika’s polyamory, Angelica’s feelings for her were always genuine…and kissing someone new when your heart belongs to someone else feels wrong. Angelica spots Malika and waves her over to the bar where she introduces Malika to Gillian. Angelica rushes off to make Malika a drink and Malika and Gillian just sit there…pretending as if they’re comfortable and as if this storyline makes any sense whatsoever.

+ Sufficed to say, I have not been a fan of the story involving Joaquin and his long-lost sister, I was struck this week by the easy solution to this whole problem: Mariana putting one call into her mama. Honestly, one call to Stef Adams Foster and this whole mess could be solved in no time.

+ Speaking of Mariana, Bulk Beauty has finally launched and while I’m always cheering for Mariana’s success, I’m still not entirely sold on her reunion with the Byte Club girls. I feel like there have been so many issues between them that have gone unaddressed and I just keep waiting for that shoe to drop. Also? I guess I’m supposed to be disappointed by Evan’s decision to keep his relationship with Mariana platonic but I think it’s a positive development. Neither of them need that mess.

+ Queer fans are conditioned, I think, to appreciate a good slow burn love story…in part because gay storytelling used to fall into just two categories: “blink and you missed it” or “epic slow burn.” Back then, shows were so nervous about telling queer stories that they either wanted them over before anyone could notice (while also accepting plaudits for their “brave storytelling”) or they strung the stories out for so long in an effort to make them more palatable to a straight audience. So we are really built for this. That said, this Davia and Dennis thing?

This is too much. Continuing to build up the characters’ confidence only to have it regress in the face of these artificial roadblocks? Showing them so in tune with each other one moment then completely out of sync the next? The show’s prolonged this dance between Davia and Dennis for too long and now it’s just getting annoying. As we like to say in the South, “shit or get off the pot.”

Next Week: “Coterie relationships can get kinda messy, ya know?”