This week’s episode of Good Trouble starts ominously: someone, cloaked in darkness, digging a shallow grave and then dragging a lifeless body, wrapped in plastic sheeting and duct tape, to its final resting place. It’s not real, it’s just a dream — a nightmare, really — that jolts Joaquin from his slumber…but it is a harbinger of the kind of episode upon which we’re about to embark.

Simply put: it’s dark. “I Don’t Belong Here” is perhaps the darkest episode of Good Trouble to date and it is almost relentless in its darkness. The story behind Joaquin’s missing sister? Dark. The real reason Alice quits Margaret Cho’s comedy tour? Dark. Gael and Isabella’s storyline? Dark. Even Davia and Luca’s friendship — which, I suppose, is meant to inject some light into the episode — is shrouded by concerns about Davia’s eating disorder and Luca’s homelessness. So again, dark. It’s a lot.

That said, in the darkness, the talent of this cast is truly able to shine brightly. Everyone rises to the occasion to tell these harrowing stories but Sherry Cola and Kara Wang are standouts. Alice’s storyline really affords Cola the opportunity to showcase that she’s capable of more than just doing comedy. As I noted last week, the girl’s got some range. The storyline allows the audience to see a deeper, more empathetic side to Sumi — again, Kara Wang hits all the notes perfectly — and you truly get a sense of why Alice once loved her (as I’ve noted before, it hasn’t always been clear). I might even ship it now?

Maybe…but I’m getting ahead of myself, let’s recap what happened. 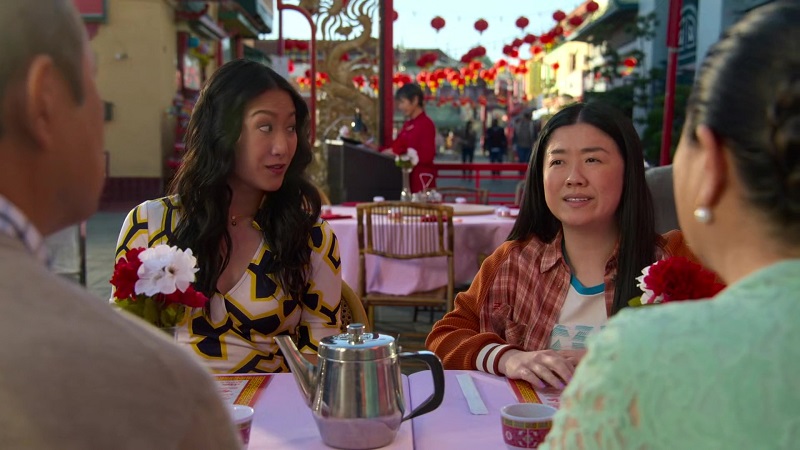 Alice invites Sumi to join her and her parents for lunch. For a moment, I think about how noteworthy this is: in the first season of Good Trouble, Alice’s lunches with her parents were always shrouded in secrets. Alice was keeping her sexuality a secret and lying about the nature of her relationship with Sumi. And while you want to celebrate that Alice is finally coming to the table as her full, authentic self, a different set of secrets remain. Alice’s parents don’t know that she quit her comedy tour and Sumi doesn’t know what happened to Alice while she was on the road. As Alice approaches their lunch table, she reconsiders the outing.

She doesn’t know what the bigger mistake was: agreeing to have lunch with her parents or inviting Sumi along. Sumi’s taken aback — she’s there to support Alice when she tells her parents she’s giving up on stand-up — but volunteers to leave if it’ll make Alice more comfortable. Unfortunately, Alice’s dad has spotted them both and starts gesticulating wildly to ensure that Alice and Sumi can see them. Alice pretends not to see, buying herself time to explain to Sumi why she now doesn’t want to tell her family about quitting the tour, but her father’s waves just become more persistent. Sumi agrees not to spill the details to Alice’s parents…who have now gotten up from their seats and start to approach.

If I’d known the way the rest of the episode is going to go, upon first watch, I would’ve appreciated that opening salvo with Alice’s parents more…it’s hilarious and one of few bright spots in this episode. Thankfully, it’s still funny on re-watch. Alice’s parents ignore their daughter and greet Sumi warmly. Again, hilarious and proof that sometimes, no matter how much things change, some things still stay the same.

Once they’re settled, Alice’s father asks how the tour is going and her mother shares her excitement at the prospect of seeing the show when it comes to Los Angeles. Sumi runs interference for Alice, explaining that the comedienne won’t be a part of that stop on the tour. Alice jumps in and explains that Margaret booked other comics for that leg of the tour and her father wonders, aloud, if it’s because of what happened. Alice assures him that it doesn’t and quickly tries to pivot the conversation to something else…to anything else…but Sumi won’t allow it. She’s suspected that something happened while Alice was out on tour and this is as close as she’s gotten to hearing the truth.

“What do you mean? What happened?” Sumi asks. Alice assures her that nothing happened but her demeanor shifts, noticeably. She glares at her parents, wordlessly urging them not to tell Sumi what happened. Sumi doesn’t give up, though, and presses for answers and, though, Alice tells her it’s not a big deal, she gets increasingly jittery as she recalls the events that led up to her departure.

The show flashes back to one of Alice’s tour stops. She’s onstage and she’s absolutely killing it. She tells a hilarious joke about her high school bully’s friend request and the entire audience is alive with riotous laughter. Except this one guy…this one guy who insists on heckling Alice from his seat in the crowd. Alice is deft in her response, tossing back quickly conceived jokes, and roasting the heckler from the stage. The crowd loves it but this one guy absolutely does not. He waits for Alice outside, after the show, and confronts her when she comes out alone. Alice tenses immediately when she sees him and she surveys the space around her for help and/or a quick exit. Finding neither, she’s left alone to face his wrath. The heckler invades Alice’s space and tells her that she’s not funny. He shouts a racial slur at her and then assaults her, tossing his drink on her. Even after the heckler scurries away, Alice just stands there, shocked and saddened by what’s just happened…and, again, looking around for help that never comes.

As this show is wont to do, Good Trouble finds itself in another case of art imitating life, as Alice is attacked for her onstage performance, just weeks after the world saw the same thing happen to Chris Rock. And while that’s a valid conversation to have, I don’t want it to distract from the racialized attack that Alice suffers…and the increased amount of anti-Asian violence that we’ve witnessed across the world. According to the latest national report from Stop AAPI Hate, Asian women, in particular, are bearing the brunt of the rise of anti-AAPI hate, reporting 61.8% of hate incidences. Verbal harassment and physical assault, such as what Alice experiences in this episode, represent the most reported forms of discrimination. Politicians have answered the rise in anti-AAPI hate with their reflexive solution to everything — more police — but it hasn’t help. Communities are still looking around for help that never comes.

Back in present day, Sumi apologizes to a tearful Alice for her experience and asks if she told anyone…the police or Margaret Cho. Alice’s father interjects and admits that they advised Alice not to tell anyone. He suggests that as long as Alice wasn’t physically harmed, there’s no reason to make waves. Sumi is indignant, pointing out that Alice actually was assaulted, but Alice’s mother reflects on the way this country view Chinese-Americans as Chinese first and how, whatever their citizenship status, they’ll always be viewed as guests here. As Alice’s mom speaks, Sumi reaches out and touches Alice’s face, dabbing away the tears. It’s such a small and tender moment — one that I wonder if it was improvised or scripted — that shifted me out of the shock and anger of what happened to Alice and to the heartbreak of it all.

“We’ve survived this long by keeping our heads down and not attracting attention,” Alice’s father explains. “Going public could make things worse, make this man more angry. This time it was a soda but next time he could have a gun.”

Her mother adds, “we love Alice. We want to keep her safe.” 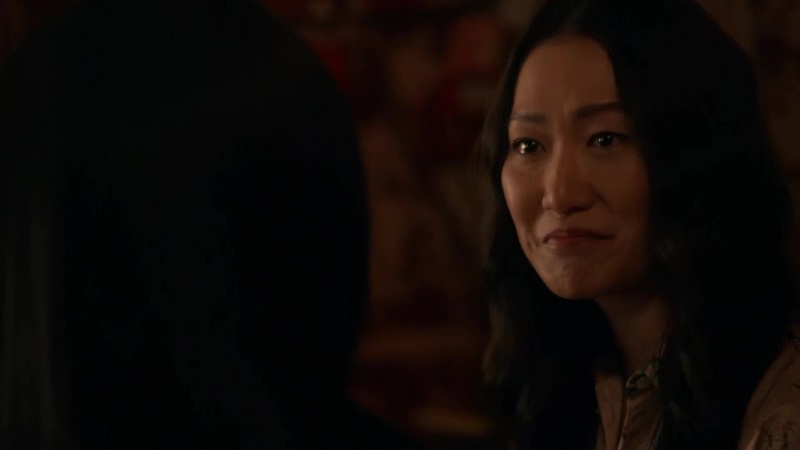 Alice brushes away her tears and assures everyone that she’s fine but Sumi clearly doesn’t believe her. Later, she confronts Alice in the vestibule and lets her know that she knows that she’s not fine…no one under those circumstances would be. Sumi acknowledges that what happened to Alice was terrifying and humiliating and, though she disagrees, she understands the advice Alice’s parents gave. Sumi shares the story of discrimination she experienced while part of the cheer team in high school and how she accepted it because she wanted to be liked. But one day, Sumi recalls, it all became too much and she reported the behavior to her coach. The students were reprimanded and, to punish her for speaking out, they isolated her.

“What happened to me wasn’t as scary or violent but I understand that there’s a price for speaking out,” Sumi acknowledges. “And even though I wanted to, I didn’t quit cheer because I really loved it. All I’m saying is giving up something you love is too high a price to pay for the ignorance of others.”

Alice thanks Sumi for sharing her story and, after ensuring that Alice has enough blankets, Sumi retreats back to her loft. Soon thereafter, though, Alice enters Sumi’s loft and climbs into bed next to her. Sumi immediately extends her arms around Alice, letting her know she’s loved, and then gently rubs her back as Alice cries herself to sleep.

+ It was heartbreaking to watch Isabella and Gael have to face the possibility that their child might be born with a genetic disorder. Priscilla Quintana really captured an expectant mother’s sadness while Tommy Martinez withheld Gael’s emotions to really be there for her. Really strong performances. Do I wish that this trauma wasn’t such a transparent attempt to have Gael and Isabella end up in a romantic relationship, though? Absolutely.

+ I’d been struggling to connect with Davia’s burlesque story — though I do like the friendship she’s built with Luca — but I thought that this week’s episode did something that was crucial: it connected Davia’s history (her eating disorder, her work as a body positive influencer) with her current storyline. Now it makes more sense as a character arc.

+ I’m trying, y’all, but I really cannot muster up the enthusiasm for this Joaquin storyline. I keep hoping that Joaquin’s burgeoning relationship with Mariana might help me embrace this character more but I’m just not there yet.

Next Week: The Spring Finale