When I wrote my first review of Freeform’s Good Trouble, I ended it with a word of caution:

There is, admittedly, some nervousness about Good Trouble falling into the same trap as The Fosters: endeavoring to tell more stories than the show has time to tell well which led to characters, storylines and the audience being shortchanged. It was clear that the writers had a lot of great stories to tell — many from communities whose stories often go unheard — and that’s laudable; but maybe let’s not try to shoehorn all those stories in at once.

Through eight episodes, Good Trouble‘s done a good job of keeping the show’s narrative focused and balanced, but in “Willful Blindness” the show stumbles. Good Trouble‘s shown a willingness to tackle a lot of storylines in one episode but, thus far, none come close to packing the emotional wallop of those included in “Willful Blindness.” From the conclusion to Rebecca’s #MeToo arc to Alice interacting with parents who don’t know about her sexuality to Malika reuniting with her neglectful mother (featuring a tour de force performance by Zuri Adele), it was just felt like this episode grappled with way too much at once and, in the process, lost some of the emotional resonance it should’ve had. Plus, those jam-packed storylines mean that Gael’s story got shortchanged; thus rendering his storyline almost nonsensical. Let’s hope that the error is a one-off and not a harbinger of what’s to come. 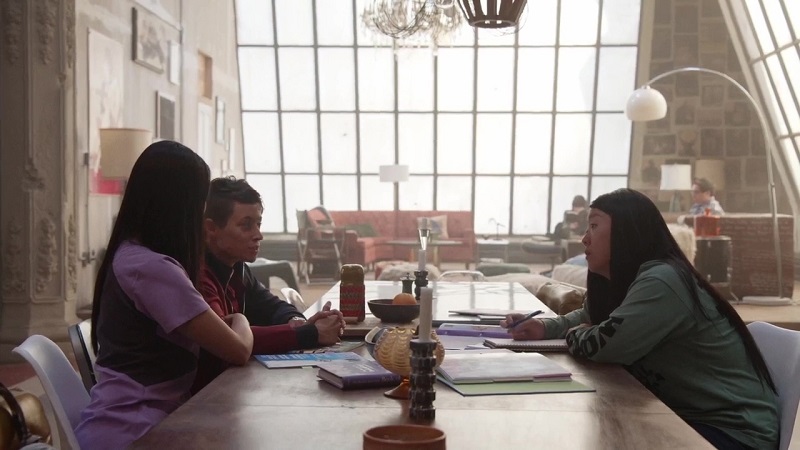 “They’ll be married soon…and this whole experiment in torture will be over.”

Once again, Alice finds herself working with Meera and Sumi on their forthcoming wedding plans. It’s torturous for her, clearly so, but the newly reunited pair is so firmly ensconced in their own world, neither of them recognize Alice’s pain. Once Sumi gets her way on the music for the reception — band, not a DJ — she departs, leaving Meera an opportunity to ask Alice to help plan a wedding shower for Sumi. OF COURSE, Alice says yes because, apparently, she’s glutton for punishment. After Meera leaves, Mariana sits down next to Alice and shoots her a knowing glare as she munches on avocado toast. It’ll all be over soon, Alice assures Mariana (and herself), but the lunches between Alice, her parents and Sumi, like the one scheduled for the next day, will likely go on forever. Even though they don’t know the true nature of Alice’s relationship with Sumi, Alice’s parents still love her.

“Ex-roommate. Best friend. But if they did know, they probably would have chosen her in the break-up,” Alice admits. Mariana doesn’t want to believe that and neither do I but the way that Alice’s mother fawns over Sumi the next day over lunch, you know it’s true.

Alice’s mother is a handful. It was like sitting at a family barbecue surrounded by my aunties and getting hit with a barrage of really uncomfortable, invasive questions and pointed, hurtful commentary… except, in this case, they’re all coming from this one person. Nothing about Alice is good enough for her. She compares Alice to her brother and Sumi, unfavorably. Why doesn’t Alice have a great job like her brother? Sumi’s about to become a doctor, why can’t Alice be more like her? Sumi’s makeup and hair are flawless — which, I mean, facts — and why can’t Alice look more like her? When is Alice finally going to settle down and give her mother some grandchildren? Why hasn’t she ever brought anyone home? The conversation is so withering and familiar that the discomfort seeps back into me and I tense up… and, exactly when I do, Alice breaks. 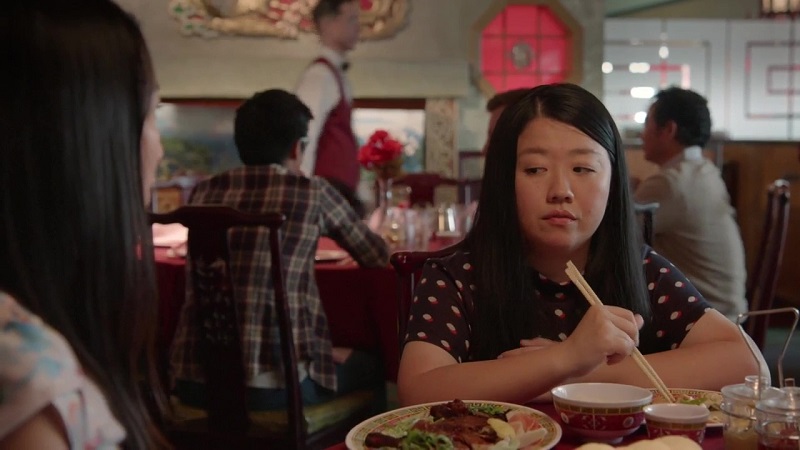 Lunch, while closeted, with your parents and the ex that your parents love and you’re still hung up on…FUN TIMES!

“I am dating… someone… sort of,” Alice interjects and the surprise is palpable. Alice’s father pauses his eating, Sumi throws her a look of disbelief — she literally saw Joey in Alice’s bed, how is this a surprise? — and her mother peppers her with a whole new set of questions. Alice let’s her new love interest’s name slip without acknowledging her gender and that only leads to more questions. Recognizing Alice’s discomfort, Sumi rescues her by announcing her own engagement. Alice’s mother is elated and forgets about whatever she was asking her daughter. When Alice’s mother inquires about her fiance’s name, Alice panics — if Sumi tells her mother about Meera, Sumi will be outing herself and, by default, her too — but in another show of kindness, Sumi announces that she’s getting married to someone named Myron.

Later, Alice meets up with Myron Meera to begin planning the shower. Things are amicable between the pair. They actually seem like friends. Meera’s supportive of Alice — she encourages Alice to go on Joey’s radio show, as planned, despite her stage fright — and there’s not a moment where you feel like Meera is weary about Alice’s connection to Sumi. And like the supportive friend she’s trying to be, when Alice does go on Joey’s radio show (which I thought was on Sunday mornings but, apparently, is not?), Meera tunes in. What she gets for her trouble, however, is Alice using her and Sumi as punchlines for jokes. The next day, Meera goes to confront Alice about her jokes and it all blows up.

Alice reveals the root of the animosity when she shouts, “We were not broken up when you guys cheated on me!”

Sumi rushes in and tries to figure out what the pair are fighting about, as if it wasn’t patently obvious. Meera covers by revealing her surprise bridal shower and that their disagreement was over the games to play. Sumi seems to buy this, but the whole thing just leaves me worried that, one day, this girl’s going to be someone’s doctor.

Later, Alice and Joey exchange texts. Alice doesn’t want to make jokes at Sumi’s expense anymore and Joey takes that as another sign that Alice isn’t over her ex-girlfriend yet. Alice goes to text back — “It’s not because of Sumi, it’s because I’m not out to my parents” — but she can’t muster up the courage to send it, mainly because she knows it’s only partly true. And thus, seemingly, ends Alice’s short-lived relationship with the radio show host.

Meanwhile, Malika’s brother, Dom, strolls into her bar with a letter from her estranged mother. He’s been helping her get clean and Malika recognizes the letter as just another step in the recovery process, rather than a sincere effort to repair their fractured relationship. Conversations with Jamal’s mother — who embraces Malika as the daughter she never had — and Mariana — who, of course, has some experience with a biological mother caught in the throes of addiction — convince Malika not to read the letter but, instead, to go directly to her mother and hear her out. It’s obvious that this meeting is going to go poorly but it goes worse than I even imagined. 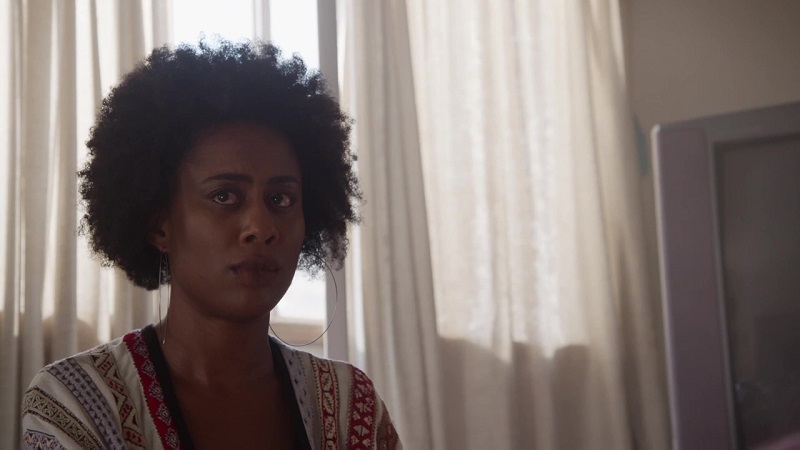 Her mother offers no true remorse and no genuine apologies for what happened. She claims that Child Protective Services’ actions were an overreaction to her being a few payments behind on the light bill, not because of any recklessness on her part. She puts the blame for everything, including her failed attempts to get Dom and Malika back, right on 11-year-old Malika’s shoulders. Malika watches her brother out of the corner of her eye the entire time, silently begging him to have the strength to do now what he couldn’t do then — stop their mother’s abuse — but he doesn’t. He is as cowardly now as he was then and he just stands there, letting his mother emotionally wreck his younger sister, barely saying a word.

Malika’s mother offers to accept responsibility for what she did wrong if, and only if, Malika will accept blame for what she did wrong. She will apologize for her mistakes if Malika apologizes for hers. THE AUDACITY. She was 11! Underneath it all, Malika is seething with rage but she doesn’t unleash it; she wants a relationship with her brother and she knows reconciling with her mother is the only way to get it. And so she bites her tongue, and says what her mother wants to hear, “I was wrong and I’m sorry mom.”

After apologies are exchanged, her mother hits Malika up for cash (OF COURSE SHE DOES!) and then ushers Malika out of the door to watch the home shopping network. For a long while, Malika just sits outside in her car, crying and banging against the steering wheel in frustration, and you just feel all of her regret and frustration. And then, because the hits just keep coming for Malika, she spots her brother, bringing back alcohol for their mother from the neighborhood corner store. Realizing nothing’s really changed, Malika lets go of all the pretense and tells the honest truth.

Malika turns to face the window that her mom’s been peering out of and screams, “I am not sorry!”

Dom’s unmoved by Malika’s pleas to stop enabling their mother or her assurances that he can find a mother’s love outside their biological mother’s grasp. When he retreats back to their mother, Malika knows their relationship is over… and, unsurprisingly, she retreats to the side of her chosen maternal figure: sitting beside Jamal’s mother in court, even though she promised Callie she’d keep her distance.

Next week? We’re celebrating Davia’s birthday with an unintended visit from our least favorite Adams Foster.