This season, we’ve gotten to see Alice try to level up her career with participation in the CBTV diversity workshop. Things have not gone well. The group’s program director, Scott Farrell, is a relic: a cis, presumably straight, white man who’s using this diversity workshop to boost his own career while also resenting the diverse comedians in the group for gaining entry into a space previously reserved for people who look like him. Under Scott’s direction, the workshop becomes less about these comedians finding their way in the industry and more about them continuing to fight for a seat at the table. True to character, Alice recoils from the fight, but after a push from Lindsay, she persists.

But when asked to present a new character for the workshop, Alice channels her mother and her mother’s accent during her improv routine. The bit earns Alice riotous laughter from Scott and the workshop’s writing team. For a moment, Alice feels vindicated — she is funny and she deserves to be here — but Lindsay promptly calls her out for falling back on her ethnicity. It was, at the time, a challenging scene to watch. The accent erased all of Alice’s mother’s complexity. It became, to paraphrase comedian Hari Kondabolu, a stand-in for Alice’s mother, replacing her real stories and her real struggles.

But if watching “Whoosh, Pow, Bang” was challenging, watching “Help” bordered on impossible.

Last Tuesday, a 21-year old white man walked into three different spas in the metro Atlanta area and opened fire, killing eight people. Among the victims were six Asian women: Soon Chung Park, Hyun Jung Grant, Suncha Kim, Yong Ae Yue, Xiaojie Tan and Daoyou Feng. The shooting was the latest in a dramatic spike of attacks, both online and off, against the Asian community during the pandemic. Nearly 3800 separate incidences of anti-Asian hate have been reported to Stop AAPI Hate since March 2020. Local officials in Georgia continue to gaslight Asian communities by suggesting that the shooter’s motive was devoid of racist and misogynistic intent, as if those things could be disconnected from a shooting that left six Asian women dead.

But Hollywood’s hands aren’t clean either. As Ada Hsieh notes in her column for Cosmopolitan, “This idea that I am ‘other’ has been reinforced over and over and over again by Hollywood and its perpetual portrayal of Asian women as hypersexualized, fetishized, and objectified. These depictions are dangerous — they incite possessiveness and violence.”

To its credit, Good Trouble understands this, they’ve always understood this (as evidence: “Help” is written by Thomas Wong and directed by Yoko Okumura). As Alice’s portrayer, Sherry Cola, told TV Line, “Good Trouble has been that show ahead of its time, reflecting real-life issues before the world catches up.” But that doesn’t make it any more comfortable to watch. 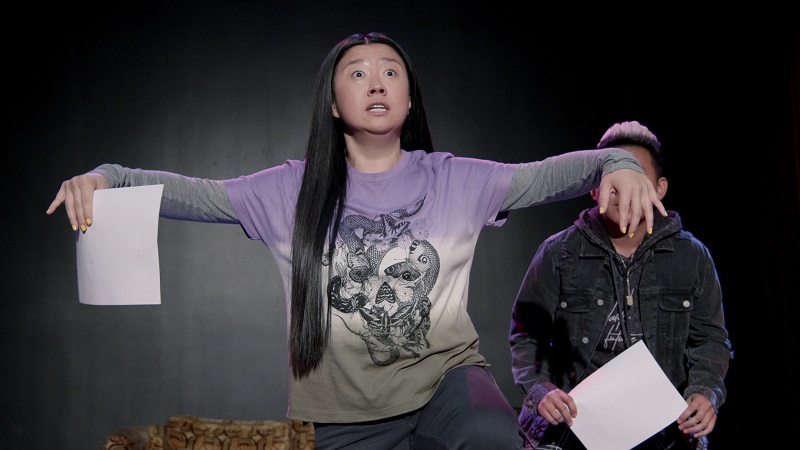 This week at the CBTV workshop, the writers return with new material for the comedians to act out. Alice has been written into three scenes — more than anyone else — and she excitedly takes the stage to perform. The first scene? In a nail salon/spa… it’s this one that hits the hardest, after the events of last week. The second? Alice as a hapless cab driver. The third? Alice as a martial artist. All scenes that lean into Asian stereotypes and all that require Alice to speak with an accent. Scott and the writers love Alice’s performances but with each scene, you see Alice’s spirit start to break.

Later, back at the Coterie, Alice admits that Lindsay was right about her falling back on her ethnicity. She regrets having done her impersonation of her mother and opening this Pandora’s box of Asian stereotypes. Lindsay, to their great credit, responds less like a competitor and more like the mentor that Alice needs at this moment.

“We don’t control how people appropriate our humor,” Lindsay explains. “So, as a non-binary comic, as an Asian comic, we’re doing jokes about people who don’t understand our pronouns or how much our mom hates how loud our dad chews but, to some people, it’s laughing at the queer freak or the Chinese lady who talks funny.”

But Alice’s peers come ready to play the game. They know this is a competition — two comedians won’t make the workshop’s final showcase — and that they need to win over the writers to have a chance. They’ve seen the way the writers respond to Alice’s accent and the stereotypes they pen for her… so they takeover the mantle. Alice didn’t just open Pandora’s box for her, she opened it for everyone.

In an improv scene with Lindsay, Magda leans into Latinx stereotypes: the fiery, hot-tempered Latina who rolls her R’s. One of Alice’s peers, Derek, approaches her to join him in a sketch and lays his cards on the table: “I don’t want to play a bumbling jihadist any more than you want to play a tiger mom but these people are the gatekeepers between us and our careers. We have to learn to play along until we can get through.”

And so she does, she takes the stage and plays the tiger mom/airline attendant to Derek’s failed terrorist. Scott, of course, eats it up — he’s in tears, he’s laughing so hard — and Alice stands on stage, begrudgingly, accepting their applause, even as she dies a little bit inside.

It’s heartbreaking to watch Alice go through this, especially because she’s still so early in her career. Moments like these, when gatekeepers force you to comport yourself in inauthentic ways, can really break a person’s spirit and enthusiasm for doing the work. I’m hoping that she’ll take a lesson from Malika and Callie and challenge a system that reduces her and her peers to stereotypes.

+ Much of what “Because, Men” started to reveal about Malika last week comes to the fore this week as she grapples with the grace she extends to others but never afforded to her mother. Zuri Adele’s performance was pitch perfect but I definitely found myself wishing that they’d extended the story. It seemed like too much emotion to pack into one-third of an episode.

+ Jared’s case is finally resolved! The charges against him have been dropped and the city’s doling out a settlement to pay for the abuse he suffered courtesy of a sheriff’s deputy gang. And, of course, as is this show’s wont: the story is based on a real issue that’s been brewing within the LA Sheriff’s Office.

+ Not to detract from that very serious issue but Kathleen and Callie’s examination of the sheriff’s deputies was a thing of beauty. Constance Zimmer is peak Mommi and I absolutely love it. I don’t even care that she’s been investigated by the FBI.

+ Callie did not look like someone who expected Jamie to say that he just wanted their relationship to be over and that they shouldn’t even be friends. Is it weird that I care about them being together more now than when they were actually together?

+ How long before Mariana’s lies about her relationship with Evan and the pitch meeting catch up with her? And will it mean the end of the Byte Club?

+ After watching “Whoosh, Pow, Bang” a few weeks ago, I revisited Hari Kondabolu’s 2017 documentary, “The Problem with Apu” — thus the random mention of Kondabolu in this piece — to help me crystallize my own thinking around the use of accents in comedy. Highly recommended.

Next Week on Good Trouble: A New Moon Ceremony, wherein romance — maybe, possibly, hopefully — might be in the cards for Alice