LGBT and queer history nerds rejoice, for the world has given us a new anthology! The Right Side Of History: 100 Years of LGBTQI Activism provides an indispensable summation of key activists and movements in the United States before and after Stonewall in a collection of third- and first-person essays and interviews.

Of course, it’s not a comprehensive work — instead, these 30 essays provide important context and understanding of individuals, movements and moments that formed the greater whole of a long fight for queer liberation, one that is far from over but which has made incredible strides in just a few decades.

The journey begins in 1922, when dancer Isadora Duncan announced her bisexuality during a performance in Boston. Beginning with the story of a bisexual woman gave me much confidence in the book — I knew right away that this would not be the one-dimensional, gay white man’s history of queerness. Throughout the book, you can read first-person essays by Miss Major Griffin-Gacy about the Stonewall riot and by NAMES Project Foundation CEO Julie Rhoad about The AIDS Memorial Quilt. 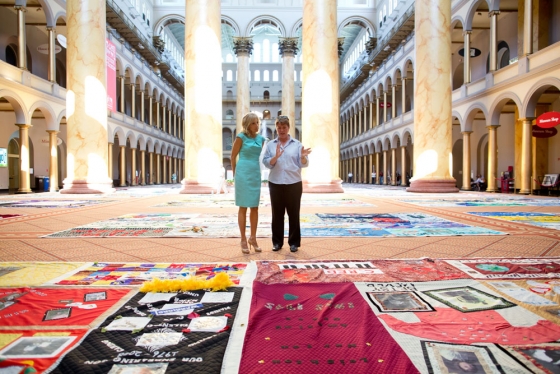 Julie Rhoad and Jill Biden view part of the AIDS Quilt. Via whitehouse.gov

Poet and biographer Neeli Cherkovski writes beautifully about the complicated contributions of Allen Ginsberg and Jack Kerouac to homosexual and bisexual liberation. Brandeis professor Anahi Russo Garrido contextualizes the impact of Alfred Kinsey’s work in its time and today. Interviews, like that of Brooks with Judy Shepard, mother of hate crime victim Matthew Shepard, provide other points of entry to well-known topics. Most of the pieces are queer people writing about other queer people and the movements they were part of. Some are common knowledge, while other topics — like the 1934 Longshoreman’s Strike that led to launching San Francisco as an internationally known queer hub — were new to me. The writing is accessible, and the many different styles keep reading interesting and make each work feel like a different, important story.

This anthology would be a compelling read for someone deeply versed in LGBTQI history or someone trying to deepen their knowledge for the first time. After reading, I found I had speckled each essay with notes and highlight marks, reminders to look further into topics and questions that a piece had touched on.   Most importantly, the book indicates a way forward — in which many more individuals will continue fighting for liberation by speaking out, creating art, and putting themselves on the line for their queer siblings. In a way, it offers much hope for what the next 100 years will bring.