Over three seasons of Good Trouble, we’ve gotten to see Alice Kwan grow. We’ve seen her assert herself as the manager of the Coterie. We’ve seen her find the courage to come out to her parents. We’ve watched her experience love and heartbreak and manage to come out the other side. She’s stepped into this new career as a stand-up comic with aplomb: impressing Lindsay Brady enough to get an opening slot on their comedy tour and impressing the CBTV judges panel enough to land a spot in their diversity workshop.

But through it all, one thing about Alice has remained the same: her selflessness. She remains committed to putting other people first, even when it’s too her detriment. She’ll do it when the stakes are high — like last week when she skipped her audition to participate in the sit-in for Malika — and when the stakes are low, like this week when she starts the CBTV workshop on the floor because she doesn’t want to impose upon anyone to get her a chair. Clearly, we’ve still got some growing to do. 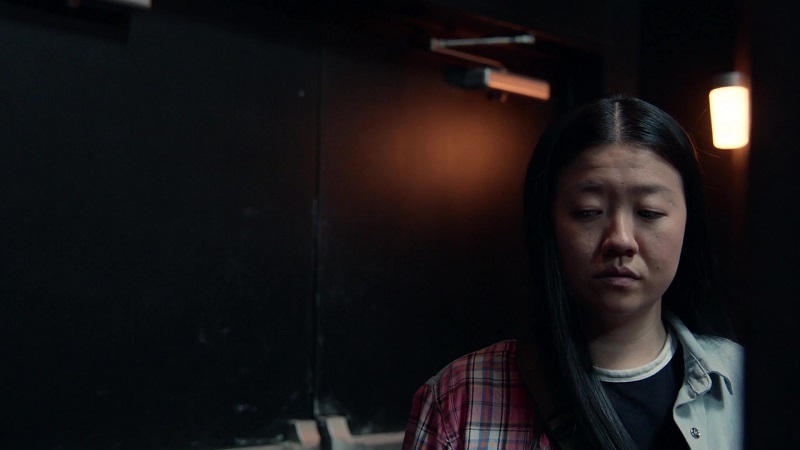 Last season, when we first learned about the CBTV diversity workshop, I tried to suppress my natural skepticism. As a biracial black queer woman, I’ve found myself in a lot of spaces where colleagues come together to talk about diversity and inclusion — it’s become a $8 billion industry — and how to improve the culture….and, sufficed to say, those did not go well. I thought about the diversity efforts we’ve already seen on Good Trouble: with Mariana and the “Fight Club” trying to establish equity at Speckulate. While those efforts yielded some gains, they were hard-fought: Mariana’s work was attacked relentlessly by the tech company’s “bro-holes,” who wanted to maintain the patriarchal power structure and nearly derailed by white women who weren’t as invested in racial equity as they were gender equity.

Nonetheless, I tried to be optimistic, for Alice. I wanted to see Alice win…I wanted to see Lindsay Brady lose…and, perhaps most of all, I wanted a reason for Ruby to stick around. It only takes a few minutes of being inside the CBTV diversity workshop to realize that my skepticism was warranted.

After welcoming the seven participants — instead of the usual six — to the program, the facilitator, Scott Farrell, jokes, “As your program director, it is my job to to make, or break, your careers.”

Everyone laughs, including Scott, but it doesn’t feel like he thinks he’s joking. He goes on to talk about all the performers who have participated in the program before and gone onto bigger things…though, of course, he can’t be bothered to remember any of their names. Scott — ostensibly, a straight cis white male — touts “what a great time [it is] to be diverse” and that diversity is “the new black.”

He points to Stacy, a black woman, and suggests that she could be the next Tiffany Haddish. The group’s latina, Magda? He tells her she could be Aubrey Plaza in “el barrio.” He tells Alice she could be “crazy” and “rich”. But he saves, perhaps, his most cringeworthy moment for Lindsay: “you could be Pat!”

Rhea Butcher’s physical reaction to the jab is understated but brilliant. They recoil from the sting of the insult and nod, as if they knew all along when Scott turned his attention to them, Pat would be his reference. Alice, apparently not having seen the first season of Work in Progress, unwittingly adds salt to the wound by asking who Pat is….and Scott relishes the opportunity to talk about that harmful character. It’s only then that Alice looks over and notices Lindsay shifting uncomfortably in their seat. Of course, Scott never notices.

Writing a good “villain” on a progressive television show is a tough needle to thread. You want to make it obvious enough that the audience can tell that this is the bad person while also never going too far that the villain become cartoonish, leaving the audience doubting whether that kind of bad person actually exists. You have to achieve that precarious balance of being compellingly subtle and blatantly obvious. For some, the depiction of Scott in this episode will fall in that latter category. He’ll seem cartoonish…after all, he offends almost every time he opens his mouth and he’s oblivious to the harm he causes. But having sat across the table from far too many Scott Farrells in my life, the depiction felt stunningly real to me.

He felt like every cis white man I’ve met who’s quietly aggrieved about the emphasis on diversity and equity but also sees it as an avenue to boost his own profile. He’s the guy who’s too hapless to be put in charge of anything that “matters” but perfectly suitable for leading the company’s diversity initiative. He’s someone who manages to center whiteness and heterosexuality even as he talks diversity and inclusion. He’s the guy who confuses one person of color with another, even though their skin tones look nothing alike, and who reflexively speaks Spanish when he passes a Latinx colleague in the hall. He’s the guy who makes a point to tell you how much of an ally is to his second cousin who just came out to the family or that he “would have voted for Obama for a third term if [he] could.” Yeah, I know Scott Farrell…I know too many Scott Farrells.

But, as it turns out, the biggest hurdle on day one of the the CBTV isn’t Scott himself, it’s that the diversity workshop culminates with a sketch showcase that will only feature five of the seven workshop participants. All of a sudden, these underrepresented voices are all pitted against each other in competition…forced to fight each other instead of fighting the system which necessitated this program in the first place. After the first day, Alice is convinced that she’ll be one of the people cut and considers quitting before it happens. Surprisingly, it’s Lindsay that talks her out of it.

“Or, maybe, you should just finish what you started instead of giving up because you had a bad day?” they suggest. Lindsay reminds Alice that she’s not competing against them, or anyone else in the group, she’s competing against herself. Alice is, understandably, weary about Lindsay’s motives but they’re sincere…besides, since they gave Alice her first big break, however good or bad she does reflects on Lindsay. Left alone to prepare a character for the next day’s workshop, Alice takes a call from her mother and it’s at this point, I scream at my television, “OH NO! ALICE! DON’T!” 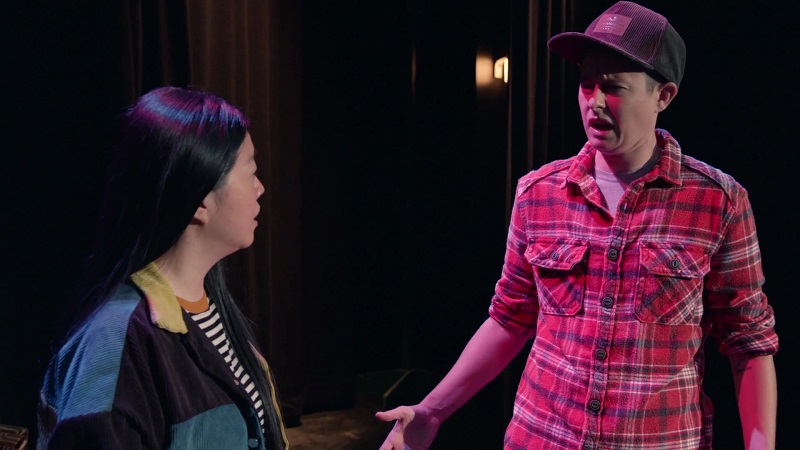 But sure enough, she does. When it comes time for Alice and Lindsay to improvise their sketch with their characters, Alice dons her mother’s accent and reenacts part of their conversation from the night before.

There’s a lot of disagreement in comedy circles about employing accents. As a general rule, I am not a fan — it feels like low-hanging fruit and it’s hard for me to hear anything other than people laughing at immigrants — but, in the instances in which its tolerable, it’s because the comedian grounds the portrayal in a holistic depiction of that person. Margaret Cho will imitate her mother’s accent but she also shares her mother’s stories and experiences. Yvonne Orji slides effortlessly into her parents’ Nigerian accents in her stand-up routine but she also lets the audience see them and Nigeria in her Netflix stand-up special. In short, accents are okay if the depiction is about more than the accent. But, of course, that’s not what Alice does here: she just imitates her mother to get a laugh and it works.

The audience laughs, Scott especially, and when the day’s session ends, Alice’s confidence is at all all-time high. She’s surrounded by visiting writers and the participants that dismissed her yesterday until she sees Lindsay leaving and goes to talk to them. Alice congratulates Lindsay on their character but they acknowledge that it was Alice that killed today.

“You’re lucky, you have your ethnicity to fall back on,” Lindsay says dismissively.

Some small part of me wants to be glad that someone clued Alice in that what she was doing was problematic, I wish it’d been anyone but Lindsay. Based on the stunned look on Alice’s face as Lindsay walks away, I think the détente between the two comics is officially over.

+ As is Good Trouble‘s wont, “Whoosh, Pow, Bang” was packed with story…and, there’s not a single storyline that I couldn’t write a thousand words about. Alice, Callie, Davia, Mariana and Gael all had great stories this week, I really loved them all. Also? The episode was directed by Pretty Little Liars alum, Troian Bellisario.

+ Callie uncovers that the guard who kept Jared pills from him — thus contributing to his increased charges — may have taken the drugs for his own personal use. But when the DA offers a plea deal to Kathleen Gale that’d have Jared out of lock-up in a month, she opts to take the case to trial. Stunned by the reversal, Callie confronts her new mentor. Instead of hurrying to get Jared out, Kathleen’s chasing a civil lawsuit against the city that could be worth millions. She rationalizes it as a way to ensure that Jared has money for treatment and a home once he gets out but Callie and I both seem worried that Jared will last that long.

+ Davia continues her work with the Equity Committee this week and each of the teachers starts sending problem students to other teachers, during their free periods, instead of the principal’s office. Once in the classroom, the focus is on restorative justice…a concept that Davia doesn’t really latch onto right away. She invites Gael into her classroom to work with the students through art and that proves successful.

I’m also glad to see Davia and Gael’s friendship continuing to grow…though I’m less certain about how I feel about whether Davia should pursue a relationship with her adorkable colleague.

+ Through 34 episodes of Good Trouble, I’ve found Gael the most relatable when he’s working on his art and when he’s with his family so I’m excited to see art re-emerge as part of his story. I completely related to his disappointment over not having achieved the same success that his friends have, especially when those friends come from money and you don’t. I was a bit remiss that he couldn’t pursue something working with those kids — he really shined in that environment — but I’m excited to see what this internship brings.

+ So, Evan’s just Tom Hank’s adult character in Big? Why does a grown ass man have a trampoline in his apartment?

Next Week: It’s a Fosters reunion! The Mamas are back!