Dating Download is an ongoing series where Shelli, Dani, and Drew try out the latest or most overlooked of dating apps so you don’t have to. Today they’re giving you the full download on Hinge.

Drew Gregory: Had either of you used Hinge before? For some reason it was always the big one I never tried.

I feel like friends were always telling me Hinge was good and to go on Hinge. But it has a reputation for being for Serious Dating and I think that always felt… idk. As you both know while I’m open to a relationship I’m not exactly looking to Uhaul or have the pressure that matching on an app means we’re going to have an extended affair.

Dani Janae: I really haven’t gotten very adventurous with my app usage until we started this so Hinge wasn’t on my radar until now.

Shelli Nicole: I’ve never used it BUT I knew a lot about it because it has commercials! It’s one of the only dating apps I’ve seen with content on television. Like the ads would come on when I’m streaming a show on Hulu.

Drew: What were the ads like?? Their slogan is the app that’s meant to be deleted, right? Which like… that alone screams We Are For Monogamy.

Shelli: Ok so like here’s the thing, you’re absolutely right — this app is for serious dating and the ads literally fucking say “it’s an app designed to be deleted.” It shows people on dates and then the little Hinge logo disappears or dies in some way because folks have found their person.

Drew: I’m going to be honest… I’m so tired of pandemic dating I wouldn’t mind being in a situation where I could happily delete my dating apps. Well, except Instagram and Twitter, of course.

Shelli: When we were testing it out I was looking to see if folks were for real like, on it to get off it, and actually — they are. So many profiles were talking about how they were looking for something serious and how they wanted to avoid time wasters.

Dani Janae: Yeah I saw a lot of that as well. I got a date off Hinge and they talked about how that was the appeal of the app — serious dating versus hookups.

Dani Janae: Lmao for real, I’m in the place where I’m like “I’ll take anything you’re offering.”

Drew: What were your initial reactions to the app? Like the format and what info it asked for and settings?

Dani Janae: I was VERY turned off by the like function. Even now I keep wanting to swipe. Which maybe is reflective of a problem with the way I date but I hate that I can send a like and the person sees it and can ignore it. How embarrassing.

Drew: At first I was hesitant to just send likes instead of commenting and starting the conversation. I’m not a bottom! Jesus.

But then it became a thing where I was putting energy into thinking of an opener with no guarantee they were even attracted to me. And that started to feel like a waste of time. 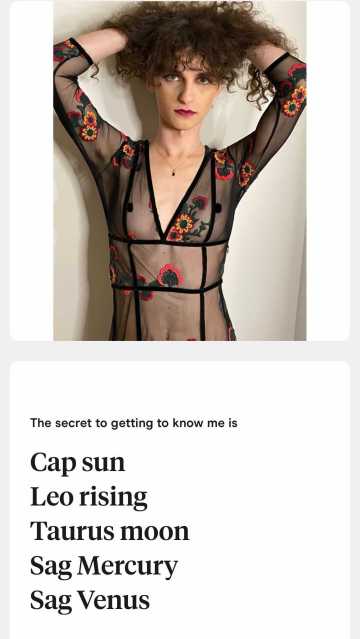 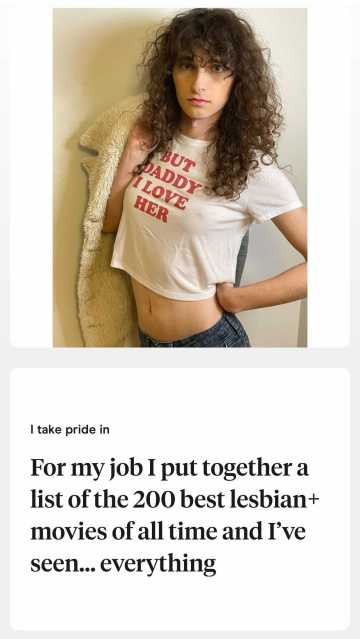 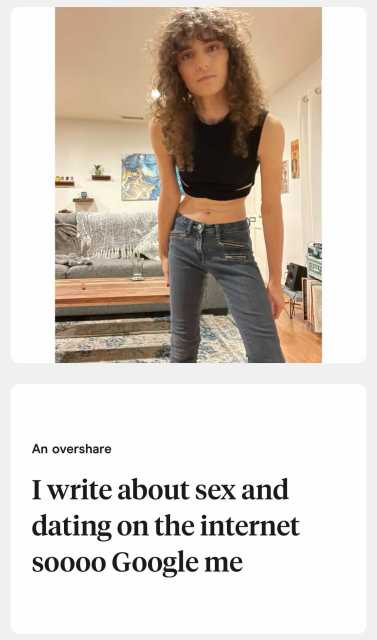 Shelli: I kinda liked the format although it wasn’t intuitive. It was a relearning thing from the swiping — it didn’t stop me from using it but it did slow me down.

YO you know what I didn’t like? When you did like some part of someone’s profile on Hinge and got matched — about 80% of the time they still invited me to start the conversation! It’s like, lesbians will find a way to still not talk.

Drew: RIGHT. I’m so over it. I hate that as a stereotype. Like it’s a true stereotype. But I want us to get over it! It’s not cute to me anymore… if it ever was.

Dani Janae: Yes! It’s like, I’m hot, you’re hot, pick something on my profile to talk to me about!

Shelli: I hate it too but it’s getting more and more verified and harder for me to say “that’s not all of us!”

It’s also like, meet me halfway baby girl, please. The vibe is easy to pick up on this app that people are there to truly link up even if you haven’t heard about the seriousness of it so everyone should be ready to talk.

Dani Janae: I also had a feeling that some of the women the app was showing me were not even queer? When the prompt asked “what are you looking for?” I saw a lot of answers that were just “a strong man with a beard” and I was like… so are you into women? I also saw lots of men slipping through the cracks.

Drew: I felt like I saw more men and straight women on Hinge than on other apps.

And yeah if this is for serious daters then date seriously. It’s really for casual daters who want serious relationships. I’m the opposite. Or used to be. I admittedly have left some people on read because I’ve just been disengaged from the app since it wasn’t working great for me.

Shelli: I’ve been quicker to disengage on this one versus all the others. I don’t know if that’s because pandemic dating is wearing on me or if I was sick of being the first one to talk. What I did like — the option to choose to see only black folks AND that option not being behind a paywall. 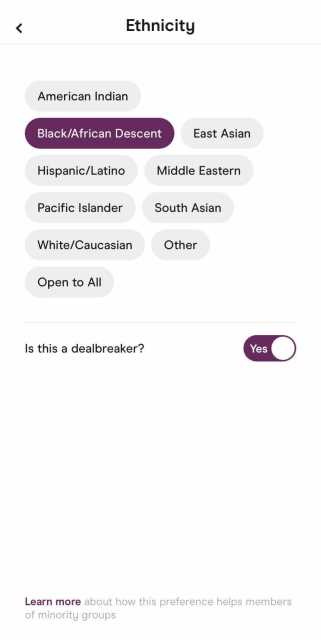 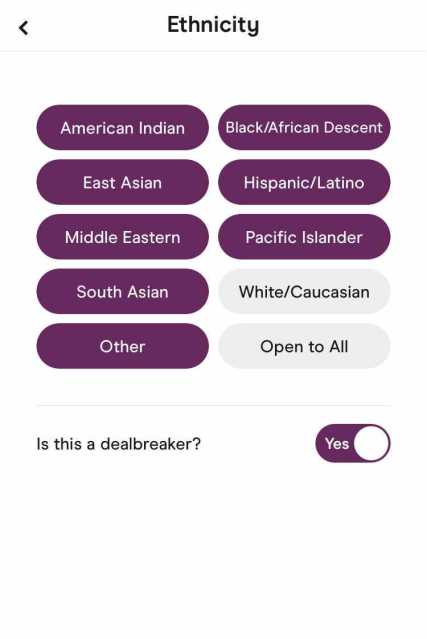 Dani Janae: Second that so hard. I selected to just not see white people and it really limited my options but it was so nice to have that be offered for free.

Shelli: I liked that it had an explanation folks could click and read as to why it would be important for marginalized communities to want that option in case people were being combative about it.

Dani Janae: I also really liked that, I thought that function and the “is this a dealbreaker” modification were very helpful.

Shelli: Yessssssss on the dealbreaker button! How did y’all feel about the Hinge prompts and being forced to use three?

And feel like the mandatory three is silly because it’s a less a numbers thing and more what you do with it. So many people answered with the plainest answers that told me nothing about them.

Dani Janae: I think apps struggle with what they think is important to people when dating, so when they come up with mandatory prompts like that they think they are opening up an opportunity to be witty and quick but not everyone has that personality, so some of the answers are a bore.

Shelli: I feel like I manifested this because in the last article I was saying how I was going to talk more and be less minimal in the profile and this time around the app was like “Well bitch let’s go.”

Drew: Haha how’d that feel for you?

Shelli: It felt kinda weird but also kinda okay? I just didn’t like that I couldn’t fully create a profile on my own and instead had to rely on prompts but — I did my best!

Drew: When someone had good answers it was such a !!! moment. Because so many were so bad. That’s the silver lining!

But okay… I don’t know how to say this… without sounding awful… But I was attracted to so few people… I’m attracted to so many more people on Bumble. And it made me wonder if it was less about the people and more about how people were presenting themselves on this app that declares itself Serious.

Dani Janae: I honestly think people are AWFUL at presenting themselves on apps. I see so many deranged smiles in my area. It’s like okay how did you end up choosing that picture???

Drew: I think what frustrates me about a lot of peoples’ approach to dating apps is the lack of fun. Like even if you want a serious monogamous relationship that’s going to start with a flirtation and a spark right? So let’s start by flirting and joking and it being casual even if eventually we want it to be more serious. ESPECIALLY then maybe!

Dani Janae: Agreed. I see a lot of profiles with this staunch, I’m looking for my wife, energy and I just want to scream “loosen up!”

Drew: Then again I am at a point in this whole dating during the pandemic thing where I’m like… okay other people seem to be doing it better than me maybe I’m the wrong one lol

Dani Janae: I think I’m very hot and funny and it’s very curious to me how I’m not doing better as well lol 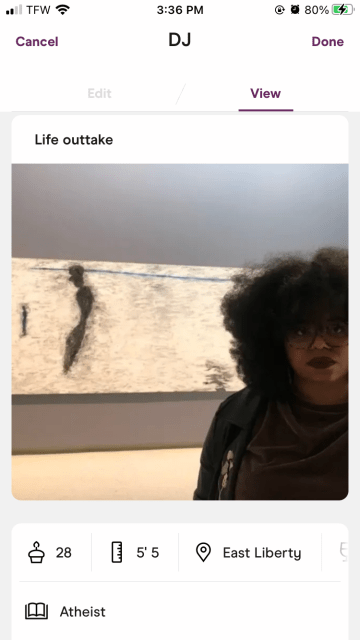 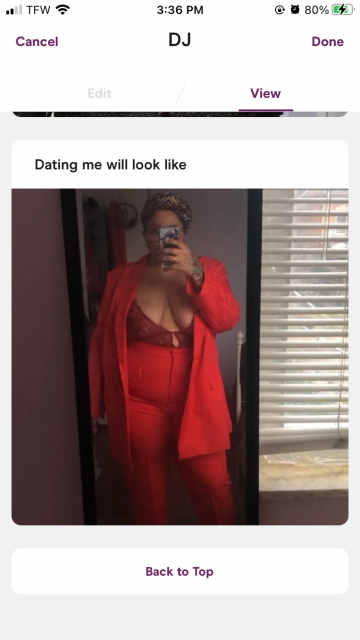 Drew: I just do so much better on Twitter and Instagram than any dating app… Which I realize is not the intended message of this series!

Dani Janae: My IG dms are full but with lots of private accounts and 21 year olds.

Drew: Hahahaha. Okay so the question is before I delete Hinge should I message this one person I matched with and respond to this other person who responded to my opener. I’m just so tired!

Dani Janae: I’m gonna say yes for both and see where it goes.

Shelli: I think all in all Hinge is honest and true about what it’s been designed to do. It’s def an app for folks who want to date with intent — but also, everyone should lighten the fuck up on it and quit yelling and mean-mugging while you look for the girl of your dreams.

Drew: Okay I have messaged the people lmao

Drew: They have three days and then I’m deleting. Sorry, Hinge.