Previously on Good Trouble, Malika Williams had reconciled herself to agreeing to a plea deal on charges she faced stemming from her direct action — however unwitting — against Judge Wilson’s nomination to the federal bench. She’d have to plead guilty to a misdemeanor charge, play a $5,000 fine and spend 30 days in jail but at least she would escape facing felony charges. Then, at the last second, the LA County Attorney adds an extra stipulation to the plea deal — if she accepts, Malika can no longer participate in community organizing — and it ends up being a bridge too far for Malika. She committed to going to trial.

In the season premiere, the march towards that trial began with what was supposed to be a routine hearing. She doesn’t invite her family — biological or chosen — to attend, she urges Isaac to go on his previously scheduled business trip…the hearing is just a formality…except, it isn’t. Because antiblackness is global and thus, Black Lives Matter has international chapters, the DA suggests that Malika is a flight risk and urges the judge to hold Malika over until trial. The judge won’t go that far but ups Malika’s bail to $250,000.

It’s one of those moments that Good Trouble does as well as any other show on television — thanks to the firsthand expertise of Patrisse Cullors and Melina Abdullah — showcasing what BLM activists go through once law enforcement wields the system against those who would dare challenge it. The moment is made even more maddening by its timing: the juxtaposition to this story with those of insurrectionists, released on their own recognizance — or, hell, approved to go on vacation in Mexico — lays the differences in our justice systems bare. 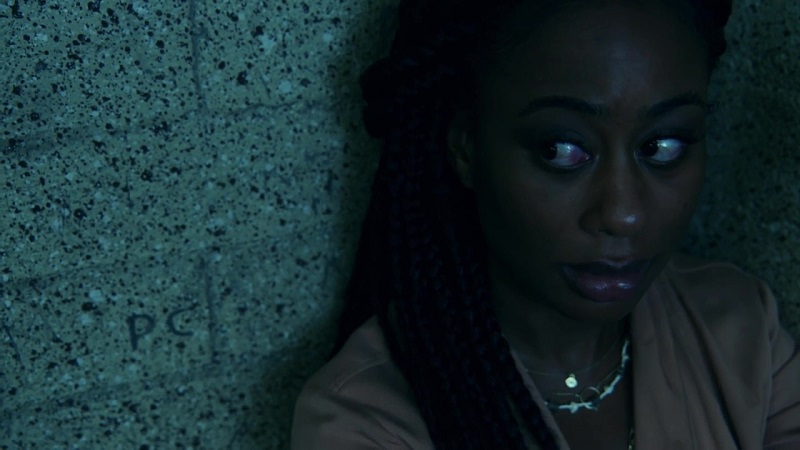 Malika’s led into a holding cell while her team works to secure her release. Tucked against the wall of a jail cell, she finally allows herself to feel the weight of what’s happened: she’s in jail and she’s scared. She brushes her tears away almost as quickly as they come. As her cellmates surround her, Malika tenses but they respond with kindness. They remember what their first time behind bars was like — “no one’s good in here,” Cadence responds when Malika suggests that she’s okay — and they do their best to ease Malika’s anxiety. They offer her a candy bar for sustenance, a phone if she needs to reach someone on the outside. The kindness is enough to snap Malika out of her moment of self-pity (however well-deserved) and allows Malika to turn her focus on learning the stories of the other women (including a special guest appearance by Isis King!) and helping them.

Later, Callie shows up at the jail…there, on her first day as a defense attorney, to interview one of Malika’s cellmates, Shai, about her arrest for indecent exposure. She spots Malika in the cell and asks Shai for a moment to talk to her friend. Malika updates Callie on her situation; instead of asking for help for herself, she encourages Callie to help one of her cellmates, Yvonne, who’s at risk of losing her job and her kids if she doesn’t get out on bail. Of course, Callie agrees, snaking the case away from her smug co-worker.

Meanwhile, Malika’s dad, brother and fellow activists are working hard to get her out. They launch a fundraiser on Mariana’s ACT-ivism app to crowdfund the money for Malika’s bail. BLM’s involvement invites white supremacism trolls to the app and they bury Malika’s fundraiser beneath their hate speech. Dismayed that her well-intentioned app is being abused, Mariana and her team jump into action. They wade into the cesspool, hoping to ban the most offensive users before the problem gets out of hand.

Malika’s team delivers a petition to the DA’s office, demanding that the charges against Malika be dropped. When the DA’s not there to meet with them, the group camps out in the office, staging a sit-in until they are heard. Malika’s Coterie family shows up for her: Gael shields Mariana from a crowd of hostile white supremacists as they make their way into the DA’s office. Gael records everything — from the offensive chants and threatening posture to a literal assault on an activist by a white supremacist right in front of a police officer who, of course, does nothing — and uses his graphic design skills to create a viral video to apply more pressure to the DA. Witnessing the scene in person gives Mariana new perspective on her app and she returns to Speckulate to urge Evan to shut the app down. 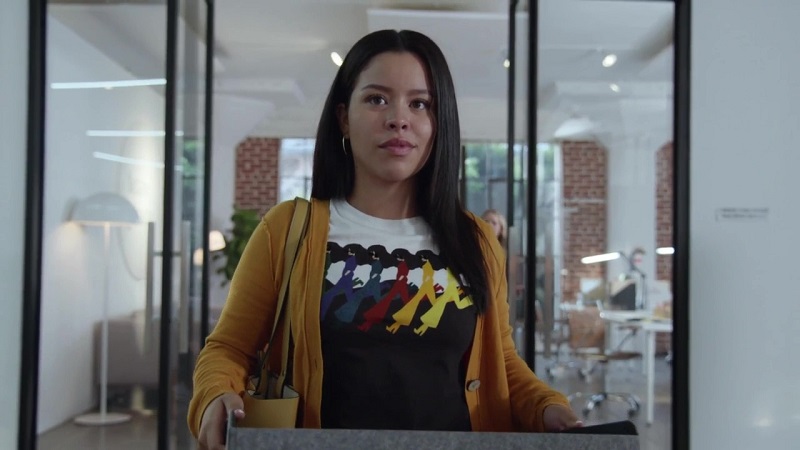 Of course, Evan resists Mariana’s push, repeating refrains we’ve heard from so many social media companies lately, “When you create a product, you can’t control who uses it. We’re a platform. We’re not a media company and we’re not political. Our job is to create ways for people to communicate, but, you know, we can’t control what they say.”

Evan won’t risk his business to stand up for what’s right and, all of a sudden, Mariana realizes that she’s tired of fighting. Everyday since she arrived at Speckulate has been a fight — a fight for gender and pay equity, a fight against harassment — and nothing about that dynamic is going to change. Exasperated, she tells her boss/secret boyfriend, Evan, “I can’t give my energy to a place that takes the best of me and won’t stand up for what’s right.” And so she quits…and the rest of the members of her all-female team walk out right behind her, committed to starting something new of their own.

Still, though, ACT-ivism’s crowdfunding works and Malika’s bail is secured. But, of course, Malika being Malika, she forfeits her bail to secure the release of her former cellmates. It’s fortunate because, despite Callie’s efforts to secure bail for Yvonne, she wouldn’t have been able to secure her release because she — like most people — couldn’t easily come up with the money. The story shines a worthwhile light on the problem with cash bail:

But before Malika’s transferred the women’s jail, the DA relents under the public pressure and secures Malika’s release. The charges have been dropped and Malika and her team return to the Coterie to celebrate.

+ Isaac arrives back at the Coterie from his business trip just as Malika returns home and they fall into their easy rapport. They’re so wrapped up at flashing heart-eyes at each other that neither notice daggers Dyonte shoots in Isaac’s direction. Yeah, that guy’s definitely going to be a problem.

+ Alice foregoes her audition for the CBTV diversity workshop in order to support Malika but, at Kelly’s urging, performs her stand-up routine for the sit-in crowd. Someone streams the whole thing and Sumi (!!) shares it with the CBTV judges panel. As the Coterie welcomes Malika home, Ruby calls and shares the news that Alice has been accepted in the program. But — plot twist! — so has Lindsay!

+ I’ve got to be honest, I never really got the Mommi thing…but after these last two weeks of Constance Zimmer as a Kathleen Gale, Callie’s new badass boss/mentor? I get it, I so get it. I’ll have to talk to Kayla and Christina to see what I need to do to cement my status on Team Mommi.

+ Speaking of Kathleen, she takes over Shai’s indecent exposure case when Shai wants to opt for a plea deal instead of having to out herself to her parents. Kathleen finds another way: after threatening to sue the DA’s office for discrimination (Shai and her girlfriend were arrested for making out while gay), she gets Shai released on her own recognizance, with the assurance that her proud father would ensure Shai returned for her court date. Only thing? The guy in the courtroom wasn’t Shai’s father at all.

Next Week: Dear Lord, Not Callie and Gael Again