Previously on Good Trouble, Alice launched her comedy career with the help of Lindsay Brady (Rhea Butcher), Mariana fought the patriarchy at Speckulate and won (kinda), Davia culturally appropriated her way into becoming Gumboot Becky and Malika grappled with possible jail time after violating a restraining order. Also, there was that one time Good Trouble didn’t overstuff an episode with too many storylines and allowed the emotional arcs to resonate….ahhh, memories! 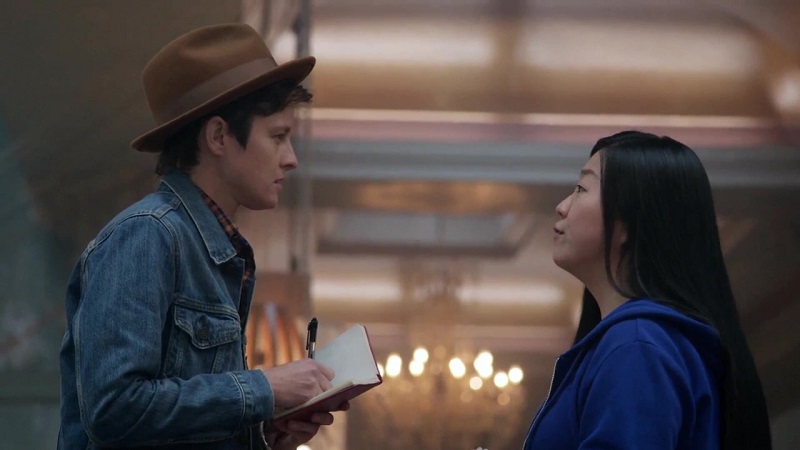 When we met Alice, she was shy and timid. On everything from buying toilet paper for the Coterie to her lingering feelings for her ex-girlfriend, Alice went out of her way to avoid conflict, even at her own expense. But coming out changes a person and it’s changed Alice: she’s more confident and assertive than she’s ever been and this week, when she sees a threat to her burgeoning comedy career, she moves to eliminate it, albeit in the kindest way possible…some things about Alice never change.

After a chance meeting in her loft, both Lindsay and Alice’s ex, Sumi, have expressed an interest in each other. Fearing that a relationship with Sumi could mess up a her own relationship with her comedy mentor, Alice tries to throw up some road blocks, “Sumi is still smarting from her last break-up” and “Lindsay is seeing someone.” Their interest persists, though, so Alice tries a new strategy: scheduling her meetings with Lindsay that coincide with Lindsay’s work day, thus limiting the chances that they’ll run into each other. When Davia confronts Alice about the ridiculous lengths she’s going to keep the pair apart, the young comedienne admits that she doesn’t want her ex-girlfriend and her mentor dating.

“So tell [Sumi], you don’t don’t want her to date Lindsay because of your professional relationship. She will get it,” Davia advises, as if she’s never actually met Sumi. Alice knows her ex well, though, and realizes that the only way Sumi will ever see her point of view is if the tables are turned. A light bulb, seemingly, goes off over Alice’s head and she realizes what she has to do.

The next day, Alice takes phone call “with her mother” the Coterie bathroom. Things are going well with Lindsay, Alice says, they’re going to get together later for drinks at Douro. But the call wasn’t for her mother’s benefit, it was for Sumi’s…who just happens to be showering in a nearby stall. She shows up at Douro, looking great and anticipating a reunion with Lindsay, only to find Alice getting drinks with her ex-girlfriend/ex-fiancée, Meera. The mood turns really award, really quickly and even after Sumi excuses herself to go to the bar, her presence is felt, with the trio shooting looks at each other from across the room. Later, Alice walks home with Sumi and her plan works to perfection: Sumi establishes the clear boundaries for the exes, including with Lindsay, and Sumi walks away thinking it was her idea.

I’m sure Sumi will find a way to “Sumi shit up” eventually, but for now, Alice takes the win. 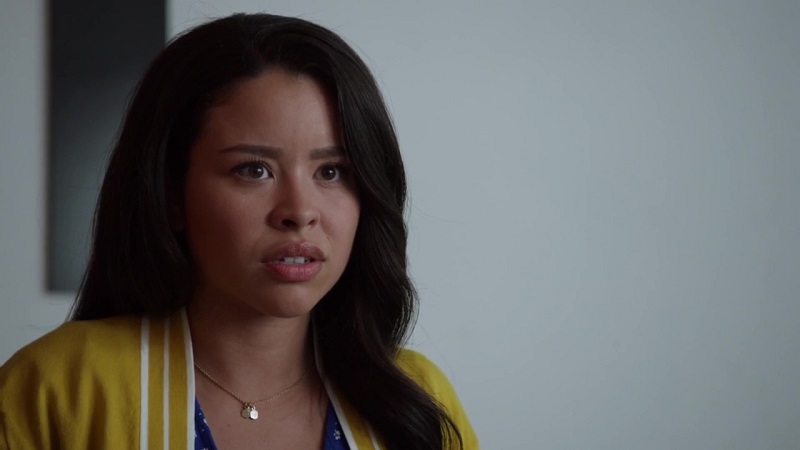 Meanwhile, at Speckulate, the walls feel like they’re starting to close around Mariana: the company’s new COO, Kendra, is still on the hunt for whomever leaked the salary numbers, while Evan, the company’s CEO, is trying to regain his control by pushing Mariana to tank the launch of her social activism app. Thankfully, she responds to Evan’s suggestion with the resounding “hell no” that it deserves.

“I’m not going to sabotage myself or the women here to save your company so you’re going have to come up with a better plan because we’re not going to pretend to fail for you to succeed,” she tells Evan firmly. The rebuke leaves Evan reeling, struggling for a way to apologize to Mariana for the suggestion, but she refuses to accept his apologies and, instead, urges him to do better.

With that issue dispatched, Mariana tries to find a way to avoid Kendra’s wrath: the COO is threatening to fire whomever leaked the salary numbers and Mariana worries if she doesn’t come forward, Kendra will fire everyone who claimed responsibility for the leak during their “I am Spartacus” moment last season. Raj reminds Mariana that getting fired by Speckulate would make her virtually unemployable in the tech industry and urges her to reconsider. And she does but not in a good way: knowing that Speckulate’s board wants to take the company public, Mariana considers admitting to the leak and then innoculating herself against firing by accusing Evan of sexual harrassment. I get that Mariana’s upset about Evan’s suggestion and the situation at Speckulate as a whole but I cannot fathom Mariana Adams-Foster contemplating such a thing, even for a second.

“I was the one who posted the salary information online. I acted alone and I take full responsibility,” Mariana admits in her meeting with Kendra. She pauses for a moment, considering making that false accusation, but thinks better of it. She adds, “but before you fire me, there’s something I want to say: I don’t regret it because we disclosed a discriminatory wage gap and got salary laddering as a result. I fought for women in tech and I’d do it again.”

But, as it turns out, the board’s not going to fire her. Kendra re-assigns Mariana to her app and, when a skeptical Mariana questions it, Kendra says that the company didn’t want to let an engineer of her caliber get away. Mariana’s stunned by the turn of events but when she walks out of her meeting, the reason behind the change becomes clear: Evan signed off on taking the company public — he’d been a firm no before — in order to keep Mariana at Speckulate.

“I don’t want to lose you,” he says, trying to convince himself and Mariana he’s only talking about her engineering prowess…and failing miserably. 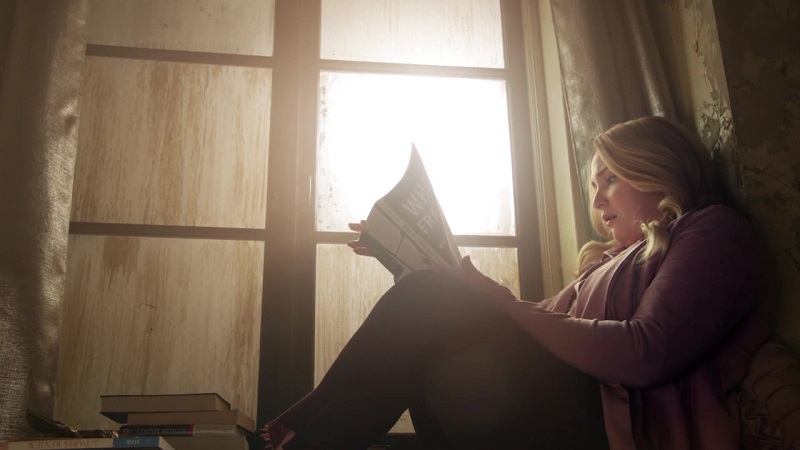 At school, Davia’s still struggling with her track three class. After the gumboot fiasco, Davia’s content to just stay in her lane and do things the way she’s always done them. Malika tries to push her to take the setback as an opportunity to engage more but given the mocking she’s had to endure, both from her students and Malika, for her efforts, she’s at a loss.

As frustrating as watching Davia’s storyline has been, I find myself pretty sympathetic to her plight: the work to unlearn the lessons of white supremacy is both hard and messy…and, if you’re committed to that unlearning, you’re probably going to fail a bunch of times before you get it right. These days, our tolerance for failure is minimal and, in some cases, that’s understandable….but sometimes we get so discouraged by the failure and the mess, that we don’t give credit for genuine good faith efforts and urge folks onward. But Malika recognizes that Davia’s trying and offers a book to help her along in her journey: White Fragility: Why It’s So Hard for White People to Talk About Racism by Robin DiAngelo. But, after a tough day at school — Davia sends one of her track three students, Andre, to the principal’s office — she tosses it into a drawer and collapses on her bed.

The next day, though, she learns that the consequences of a principal’s office visit are far beyond what she anticipated. The visit pushed Andre into a diversionary program that, ostensibly, puts him on the path to juvie. Davia happens upon probation officers shoving Andre into the wall, searching his backpack. Once they leave — after handing Andre his first strike — Davia apologizes for their treatment but Andre reminds her that she’s the reason he’s in the diversionary program in first place.

Davia: I will talk to Principal Sullivan.
Andre: Don’t act like you care.
Davia: I’m sorry, but I don’t know how to teach kids who don’t want to be taught.
Andre: You mean black kids.
Davia: In my classroom, I don’t see color. I’m colorblind.
Andre: Yeah, well that’s your problem.

Realizing that her blindspots are having an impact on her students, Davia heads back to the Coterie after work, pulls White Fragility out of her drawer and starts reading.

+ Even though Judge Wilson’s decided not to press charges against Malika for violating the restraining order (thanks Callie!) the LA County attorney is still filing felony charges in her case. She’s offered a plea deal — pleading guilty to a misdemeanor charge, a $5,000 fine plus 30 days in jail — and spends most of the episode debating whether or not to take it. She talks to her father, her brother, and Callie (strangely, though, not her boyfriend) and decides to take the plea. With good behavior, she’ll be out in two weeks and won’t have a felony on her record. But when the County attorney adds a stipulation to the plea deal that’d prohibit Malika from doing any organizing, she rejects it and declares that she’s going to trial.

This isn’t unprecedented: the LA County Attorney tried this with Melina Abdullah, who plays herself on Good Trouble.

+ If you’re unfamiliar with tracking, the folks at Good Trouble have created this great explanatory video.

+ After discovering that he and Callie are on opposite ends of Legal Aid’s housing lawsuit, Jamie asks Callie to step back from the case…essentially prioritizing his career over hers. Much to my surprise, she doesn’t respond by dumping him right away but, instead, by the end of the episode, she decides to avoid the conflict of interest by moving back to the Coterie. Only problem? The space in the loft is now occupied by another Gael-loving brunette, Isabella.

+ Also? I hope there’s more to the story of how Isabella ended up living at the Coterie because, right now, I’m scared that she’s on some Single White Female type -ish. I hope Mariana doesn’t end up axe murdered in her sleep.

Next Week: A Sisterly Reunion!