Through six episodes of Good Trouble recaps this season, we’ve dealt with some difficult issues: cash bail, white supremacy, the school to prison pipeline, sexism in tech, PTSD, the folly of diversity programs, cultural appropriation, mental illness and police brutality. It’s a lot but it’s been this show’s hallmark since its first episodes so tackling serious issues is something we’ve come to expect from Good Trouble.

But sometimes, you need a break…just a little reprieve from the show’s serious nature…and Good Trouble‘s good about giving us those too. In fact, some of my favorite episodes of the show happen when the show focuses less on issues and more on the relationships between the residents of the Coterie (see also: “Trap Heals,” “Twenty-Fine” and “Re-Birthday”). After all, what good is communal living without getting to enjoy, to quote Alice, the “sexual tension and bad decisions?” 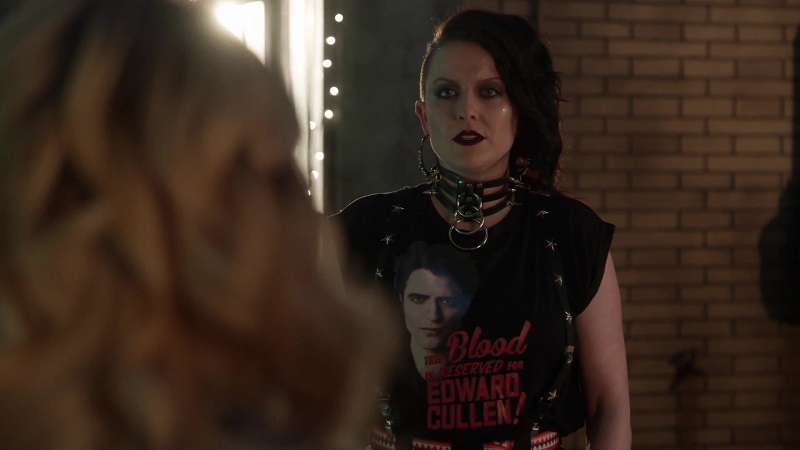 This week, the residents of the Coterie come together for a New Moon ceremony. Malika wants to reconnect with her spiritual practices and she invites Isaac, Dyonte and everyone at the Coterie to take part in setting new goals and intentions. Kelly — whose one-liners have been a reprieve from Good Trouble‘s seriousness all season — shows up in her Edward Cullen t-shirt, expecting a group-watch of New Moon, the second movie in the Twilight saga. When she discovers that the gathering isn’t about her favorite vampire-themed romance, Kelly opts out.

Soon thereafter, Mariana follows her out. Raj is due to stop by the Coterie later today to complete the post-breakup ritual of getting your things from your ex’s apartment. She’s happy with her new relationship with Evan but letting go is tough, especially since a part of her still loves Raj. Mariana was already feeling melancholy about the whole thing but when she gets a message from Claire asking about Raj, she excuses herself from the festivities to find out what’s going on. Turns out, Claire and Raj have been talking — texting, visiting each other’s Animal Crossing islands — and Claire wanted to check with Mariana to make sure it was okay before things went further. Of course, who would show up right at that moment but Raj.

The pair makes awkward small talk as Raj collects his things but, as he turns to walk out, Mariana hear something scurry across the Coterie’s living room floor. Raj assures Mariana that it’s nothing but when that nothing knocks over a floor lamp, Raj drops his box and both of them scurry to hide in separate stalls in the Coterie bathroom. THERE’S AN ANIMAL ON THE LOOSE IN THE COTERIE!

Meanwhile, back on the roof, everyone’s getting settle to participate in Malika’s New Moon ritual. Well, settled isn’t the right word. No one’s really settled. Malika’s literally caught between her actual boyfriend, Isaac — who attends the ceremony because he knows how much it means to her — and the guy she’s been making heart-eyes at all season, Dyonte. Davia invited her co-worker Matt to join the circle and keeps trying to establish a love connection between him and Gael, even though Matt: 1. isn’t queer and 2. is so clearly into her. And then there’s Alice who is…maybe…possibly…in love with Callie Adams-Foster. 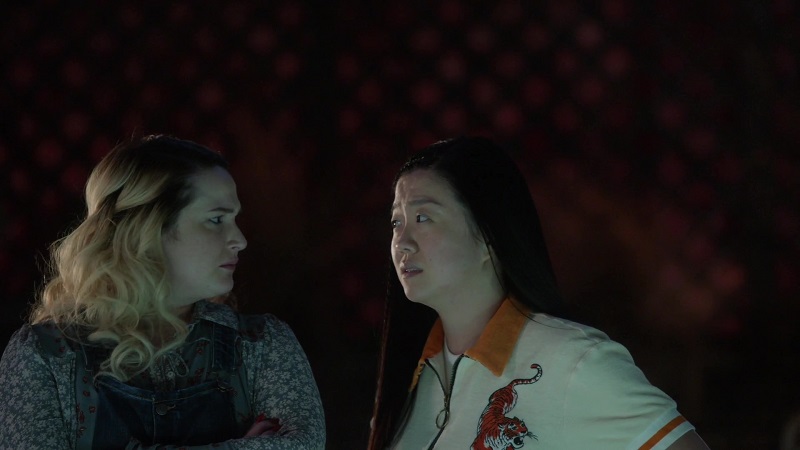 I am Davia in this picture. Davia is me.

Alice wakes up in bed next to Ruby (Yay! Ruby’s back!). Turns out those boundaries that she tried to set, post her last break-up, were a bit more flexible that she’d let on. Their one night stand turns into a two night stand and it looks as though Ruby and Alice are stumbling towards a friends with benefits situationship. Ruby just wants to keep things casual so she opts against breakfast, collects her things and kisses Alice before rushing out the door.

As she leaves, Callie knocks on Alice’s other door and finds Alice looking disappointed. Callie asks if she’s okay and Alice lies and says that she is. After dropping off her rent check, Callie departs and Alice settles back into her bed for a nap. In her sleep, she dreams of Callie staying in her loft that morning and them talking about things with Ruby. Alice doesn’t know if Ruby even likes her that much but Callie tries to put her mind at ease.

“How could she not like you? I mean, you’re so funny and kind and hot,” Callie says. Alice laughs off the compliment because, even in her dreams, Alice is still Alice, but Callie assures her that she really does think Alice is hot. Then Callie pauses, looks at Alice’s lips and leans in and kisses her. 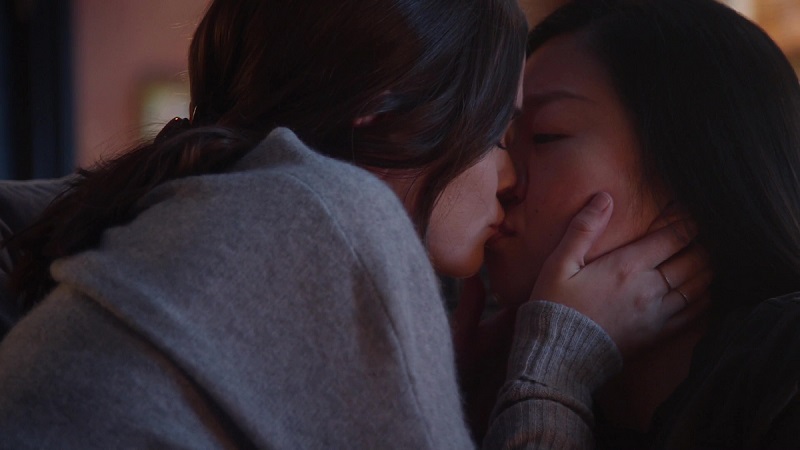 This happens differently in the episode, of course — you see the kiss long before you know the circumstances around it — but, after five seasons of The Fosters and 2.5 seasons of Good Trouble, I don’t think for a second that it’s real. I know Callie Adams-Foster too well: much to my chagrin, that girl is straight. The queerest straight girl on the planet, maybe, but straight nonetheless. I’ve made my peace with that realization (I will, however, still read your Kathleen Gale/Callie fanfics, though).

The dream makes Alice more awkward than usual around Callie. She’s nervous about holding her hand in the circle and she volunteers to accompany Callie when she goes downstairs to find Mariana. Callie declines her offer and goes downstairs alone, only to have the animal that is loose in the Coterie hiss at her from beneath Mariana’s bed. Callie screams and rushes into the closet. Hearing her screams as he descends the stairs, Gael comes rushing to the rescue. When Callie spots the animal scurrying across the floor behind him, she pulls him into the closet and they plot what to do next. They don’t so much develop a plan as put on copious amounts of clothes to ensure that they’re protected. They step out of the closet to find whatever animal is loose in the Coterie and run into Davia and Matt.

“This is downtown LA, not the Outback. It’s probably just a fat squirrel…this is exactly why you’re not supposed to feed them,” Davia professes, but as soon as the words are out of Davia’s mouth, the animal — a raccoon, it turns out — rears up and hisses at them from the table. 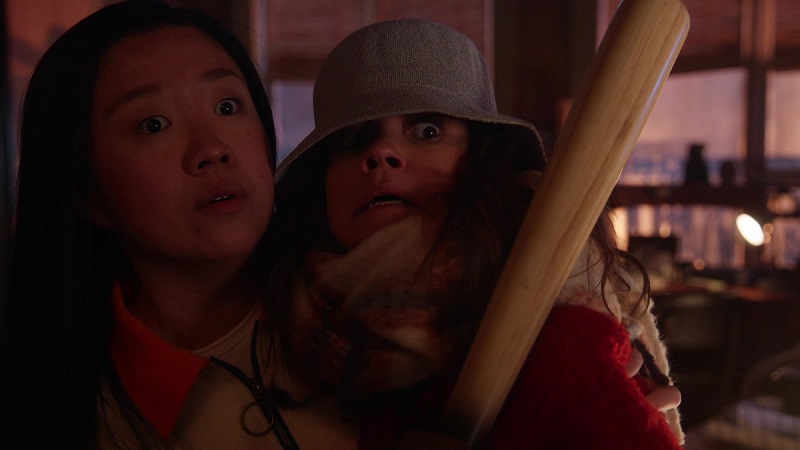 The foursome scrambles. Davia and Matt retreat to her loft, Callie and Gael run down the hallway and are confronted by raccoon #2. Callie splits off into Alice’s loft and Gael locks himself in the Coterie bathroom. She finds a bat among Alice’s things and arms herself with it, as she prepares to do battle with whatever is on the other side of rattling door. But it’s just Alice who Callie pulls inside. Alice suits up in a catcher’s mask and chest protector — leftover from her softball days, natch — and prepares to catch the raccoons with her bare hands. Callie nixes that idea so Alice grabs her laundry basket instead.

Alice is determined to protect the woman she’s maybe, possibly in love with so she charges out into the Coterie hallway with a scream. They find one of the raccoons digging through the Coterie’s trash and are able to trap it beneath the trash can. Kelly emerges, scaring them all, and Raj and Mariana try to rush to the rescue, armed with a plunger and toilet brush. Once everyone calms down, Gael and Alice explains that raccoons are loose in the Coterie and Kelly’s eyes grow wide with recognition.

Of course this is Kelly’s fault. Of course it is.

Later, after all the excitement’s died down, Davia revisits Alice’s suggestion that she might be in love with Callie. Once Alice explains the dream, Davia suggests that the dream was less about Callie and more about what Callie represents. Alice thinks of Callie as “a woman who’s unattainable and intimidating” and Davia surmises that Callie was just a stand-in for Ruby in her dream. She encourages Alice to stop being passive and take control of the relationship. 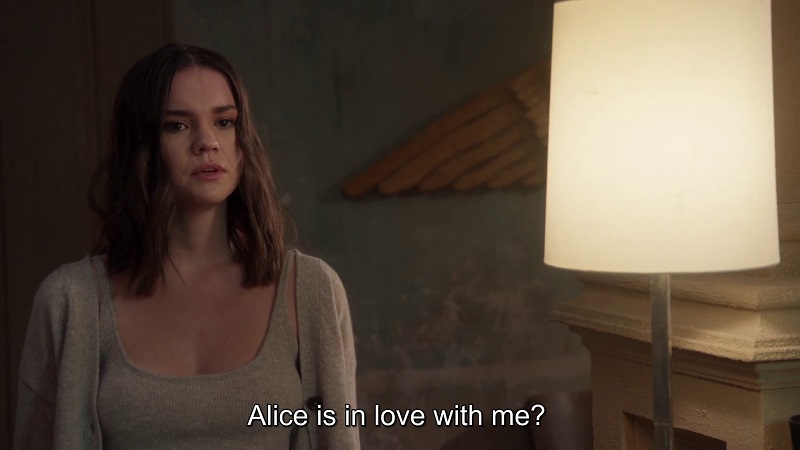 Later, when Ruby sends the “u up?” text, Alice stands firm: she declines the offer and says she’s busy tonight.

+ I loved this episode so, so much. It made me laugh out loud so many times.

+ While “New Moon” didn’t delve into all the serious issues that have become Good Trouble‘s signature, it did set up some drama for future episodes: Callie and Gael are getting closer again, Davia agreed to get drinks with Matt (and, by extension, not keep waiting for Dennis), Alice putting the kibosh on her situationship with Ruby and Isaac discovering that Dyonte is poly (a fact that Malika forgot to mention).

+ Alice suggests that Callie’s aggressive and “definitely a top”…and, yeah, that sounds about right.

Next week: Stop investing in the straights, Natalie. Love, Freeform