While social media has seemingly lessened our proximity to our heroes — following our faves’ lives on Instagram and Twitter creates a sense of imagined closeness — I think that old adage still holds sway: “Never meet your heroes because they’re sure to disappoint you.” This week on Good Trouble, Alice gets a taste of that when she meets the object of her standom: fellow comedian, Lindsay Brady (played by Autostraddle fave Rhea Butcher). 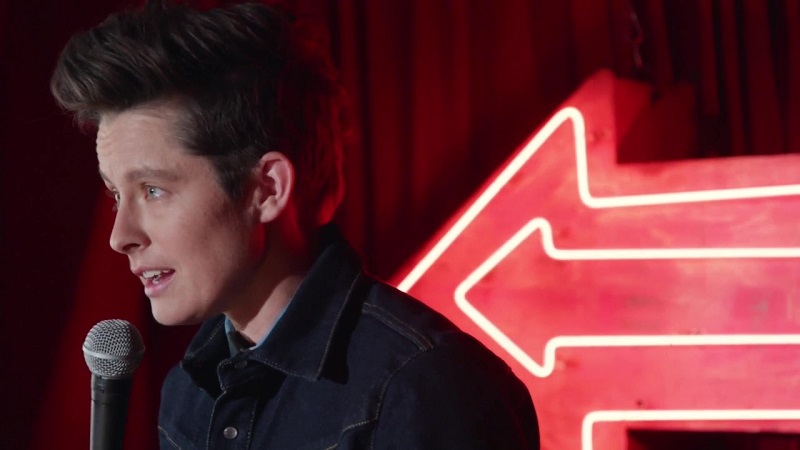 It was very distressing watching Rhea Butcher be mean to someone…

At the suggestion of two queer comics she met at Jazmin’s quinceañera, Alice stops by the queer comedy night to network with other comics. Maybe one day she’ll take the stage but for now, Alice is content to immerse herself in the scene and learn from some of the more experienced comics. On this particular night, one of those more experienced comics includes Lindsay, who’s there to workshop new material for their set. Alice has been insta-stalking Lindsay on Instagram but she hasn’t yet secured that coveted follow. With hopes that they’ll get to meet Lindsay after their set, Alice and her friends grab front-row seats for the show. And everything goes great… until it doesn’t.

Unfamiliar with the do’s and don’ts of stand-up as both a comedian and an audience member, Alice responds to Lindsay’s show like I watch TV at my house. She laughs loudly. She comments on everything. And, the worst faux pas of all, she piggybacks off Lindsay’s jokes to tell some of her own… which while earning Alice some laughs from the crowd, also draws Lindsay’s ire. They put the spotlight on Alice and then begins a withering attack on Alice and her appearance.

“Oh my God, look at that leather jacket. I am sad that a cow had to die for you to look almost alright,” Lindsay heckles, as Alice sips her drink nervously. They continue, “Did the ’80s call you on a landline and ask for Andrew Dice Clay’s whole thing back? Did the ’90s follow up with a fax and ask for George Michael’s entire thing back?”

The next day, Joey stops by the Coterie and Alice relives her humiliation. She left the comedy night so abruptly after Lindsay’s heckling that she forgot her credit card. Turns out, Joey knows Lindsay — they share a mutual ex, a revelation that might be the most lesbian Good Trouble has ever been — and Joey warns Alice that Lindsay just isn’t very nice. Apparently, Lindsay’s the Shane McCutcheon of their comedy corner of The Chart™: always interested in hooking up with whomever the newest “it girl” is. I try to ignore the sense of foreboding that sets in as Joey recalls Lindsay’s propensity for breaking up relationships but, boy, it feels like Good Trouble just dropped that anvil right in my lap.

Alice is ready to consign her comedy career to the dustbin: on top of Lindsay’s heckling and her embarrassment, she doesn’t know anyone and it’s impossible to get a spot in the line-up without connections. But Joey won’t let her quit and encourages their girlfriend to go back to the comedy club and meet more people. Joey says she can’t let one mean girl — one mean person, Alice corrects, as Lindsay also uses they/them pronouns — stand in the way of achieving her dream. Alice takes her advice, showing up at the comedy club the next night, but as soon as she walks through the door, the humiliation from the previous night hits her anew. She makes a dash for the bathroom, only to run right into Lindsay. 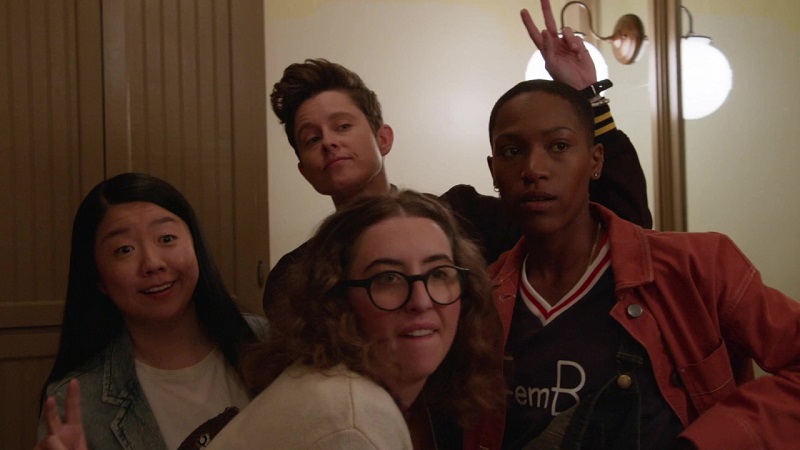 Caitlin Kimbrall, Sherry Cola, Rhea Butcher and Jonica T. Gibbs…who you will soon get to know better as the star of Lena Waithe’s new show, Twenties.

They apologize for tearing into Alice the night before, explaining, “Even a happy heckler can mess up a comedian’s set, it’s all about timing.” Her anxiety about the other night lifted, Alice’s fandom starts to take hold and she smiles brightly when her fave compliments her jokes. Alice’s comedian friends try to warn her about Lindsay being back at the club only to find Alice and Lindsay chatting. They encourage Lindsay to check out Alice’s bits on Instagram and Lindsay agrees in that way that placates everyone… but, sure enough, later, they like Alice’s work on Instagram and starts following her.

Later, though, Joey’s weary of Alice’s new connection to Lindsay. Alice reminds Joey that they’re the one who told her to get back out there and make connections… and Lindsay Brady is a huge connection. Joey still doesn’t trust Lindsay — she encourages Alice to be careful — but, at the very least, they seem to have good taste in comedy. When Joey steps out to go to the restroom, Lindsay slips into Alice’s DMs, offering to help her with her stand-up routine. Of course, Alice responds that that’d be amazing… and if I wasn’t worried before I definitely am now.

+ Callie’s antagonistic relationship with one of the Legal Aid attorneys, Marcus, continues this week and, I must admit, I’m kind of enjoying it. They cross paths at a partners’ event for Jamie’s firm — an event that Callie attends despite having called in sick for work — and while Callie’s insecure about Marcus’ judgments, he advises her to stop worrying about his opinion of her and start figuring out who she is. It’s good advice which, of course, means that Callie’s definitely not going to take it.

+ At the aforementioned partners’ event, Callie gets a window into her future life with Jamie — a life that includes bathroom remodeling, kids, nannies and no legal career — and it leaves her a little shook. She contemplates breaking things off with Jamie but doesn’t…because, I guess if she can’t have Gael, she’ll settle for a future of interior design and Napa vacays. Seriously, has it occurred to anyone that Callie could — hear me out because this is a little outside the box — JUST BE SINGLE?

+ Still smarting from his dismissal last season, Josh returns to cause problems at Speckulate this week: snapping a picture of Evan and Mariana in a compromising position…and by compromising, I mean, they’re having drinks and she touches his arm. Josh forwards it to the company Slack and it sets the rumor mill at Speckulate ablaze. Eventually, Mariana’s forced to climb on a desk and announce that she’s not seeing Evan, she’s seeing Raj.

+ Next week: It’s partytime at the Coterie for Malika’s 25th