Still smarting from her break-up with Joey, Alice Kwan would probably rather just be in her loft, sulking and eating ice cream… but because she has Sumi — an ex/best friend with good intentions and limited boundaries — she ends up at the comedy club, taking in Lindsay’s set. Sumi adheres to that old adage “the best way to get over someone is to be under someone else,” so she decides to act as Alice’s wing-woman for the night. As Lindsay performs, Sumi surveys the crowd for someone who might be a good match for Alice. Her eyes land on a woman across the club who returns her wave and Sumi’s convinced that she’s found a match. But when Alice demurs — she’s not looking for anyone — Sumi asks if it’s okay for her to hit her up then. Sumi’s always gon’ Sumi. 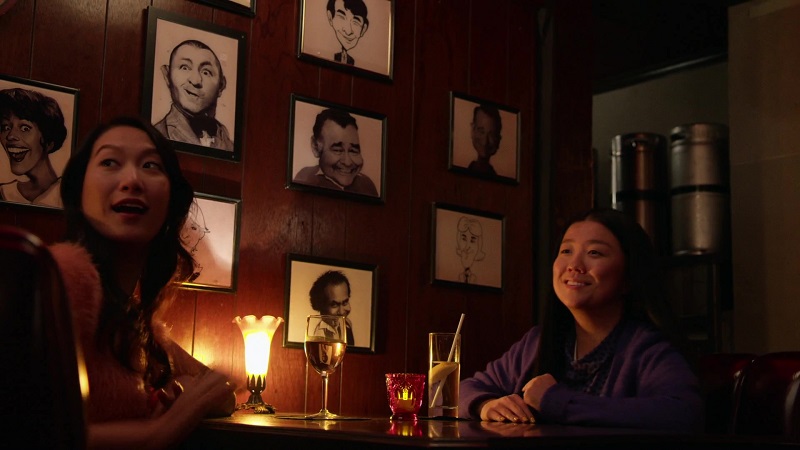 Lindsay finishes their set and joins them, sliding into the booth next to Sumi. They ask why Alice isn’t doing a set tonight but Alice demurs, she’s not feeling very funny right now. Lindsay gives a tip: whenever they’ve been creatively block, they draw from what’s going on in their life. Alice doesn’t have much going on, she admits — aside from that pint of Chunky Monkey in the Coterie refrigerator, probably — but Lindsay assures her that the world around her is still rife with material.

“Are you kidding me?” Lindsay asks, in disbelief. “You manage a communal whatever, with batshit crazy tenants. It’s comedy gold.”

Having, perhaps, learned a little something from the last time she made her real life friends the butt of her jokes, Alice is reluctant but Lindsay asserts, “everything is copy.” Their conversation is interrupted by the girl from across the club who comes over to praise Lindsay for their set. They introduce the new girl to Sumi and Alice and she recognizes Alice from a previous comedy set. She compliments Alice’s work and, based on the looks they give each other, it’s clear: the girl from across the comedy club was definitely not checking for Sumi.

The new girl, Ruby, joins the group for a drink and admits that her ex-girlfriend went back to her boyfriend when they broke up. Sumi and Lindsay trip over themselves trying to flirt with her. Never one for subtlety, Sumi notes that she’s never dated a man while Lindsay proclaims that they, unlike Sumi, have never even been with a man. The conversation feels dated for this typically modern show but you know who doesn’t care? Ruby because she’s had her eyes set on Alice this entire time.

Recognizing a good opportunity when she sees one, Alice follows Sumi into the bathroom and gives her permission to go after Lindsay. Sumi’s confused — what happened to boundaries — but Alice assures her it’s okay. Sumi’s ambivalent though: sure, she was interested in Lindsay but now Ruby’s an option and she’s hot… which is, for the record, objectively true. Fearing that Sumi might go after the girl that she’s interested in, Alice gives her one final, slightly dishonest, push. She feigns concern that Ruby is really into Lindsay and pushes Sumi to intercede before she misses out on both of them. She encourages Sumi to talk to Lindsay, in private, and be nonchalant about the whole thing. But Sumi doesn’t know the meaning of the word nonchalant so she heads back out, grabs Lindsay’s face and surprises then with a kiss.

Do you know who’s not surprised, though? Alice, who stands by watching with a satisfied smirk as her plan comes to fruition. You know who else isn’t surprised? Ruby, who recognizes Alice’s hand in this turn of events and respects her for it. Well done, Alice Kwan, well done. 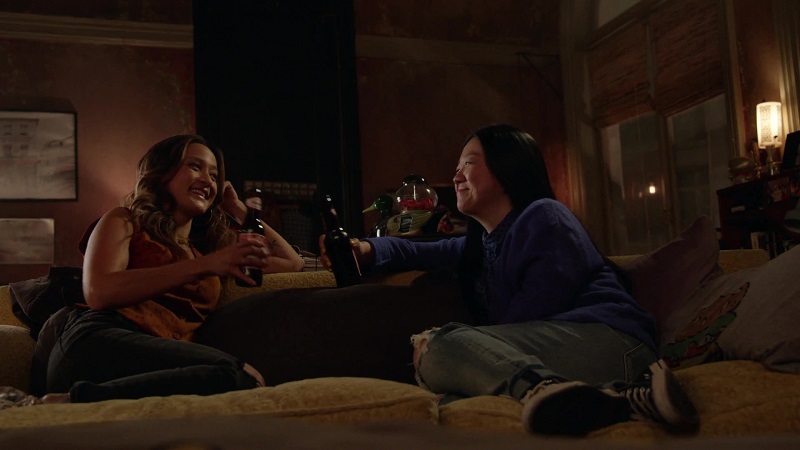 The pair retire to Alice’s loft at the Coterie and settle into an easy banter while enjoying a beer. It’s striking how relaxed they are with each other — it’s such a far cry from her conversations with Joey that always seemed so fraught — but, at the same time, it’s hard to imagine the Alice we met in the pilot being this comfortable with a new person, if she had not had that experience with Joey first.

“I’m a serial monogamist, but it’s not really working out so great,” Ruby admits, clearly still smarting over her own heartbreak. “So I’m just trying to have fun. Who knows? I’ll probably die alone.”

Then, because Ruby has ALL OF THE GAME, she adds, “at least I won’t die alone tonight.” Because Good Trouble models consent better than any other show on television, Ruby asks before she leans into her first kiss with Alice and the two end up spending the night together.

The next morning, the pair wake up together and Ruby slips out of the bed. Alice suggests they do it again sometime but Ruby holds firm to her boundaries. She already likes Alice but she knows spending more time with her means a relationship is inevitable. She needs to be single for a while so she politely declines Alice’s offer and thanks her for a great night together. Alice channels the experience into her stand-up routine. 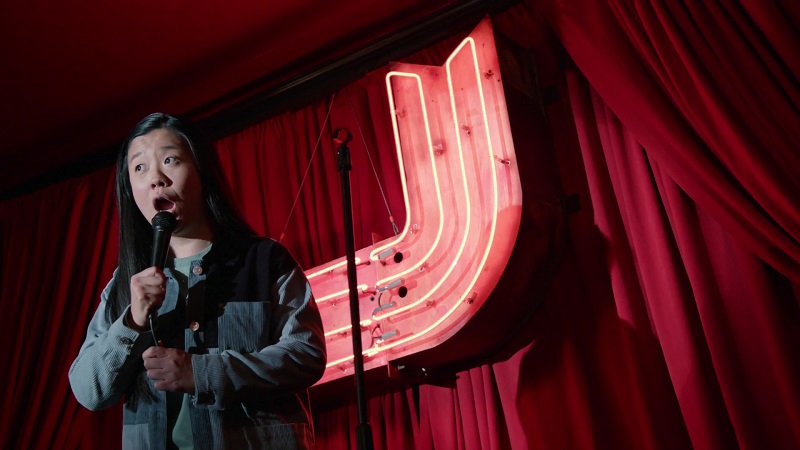 “You know, I’m sowing my wild gay oats. I’m doing it,” she jokes during her next set at the club. “I mean, who needs a sense of emotional security or to be loved? I’m getting laid!”

The situation gets a little awkward when Alice steps off the stage and notices Ruby leaning against the bar. Alice apologizes for sharing their story without her consent but Ruby takes it all in stride…”everything’s copy,” she says, echoing Lindsay’s mantra. I start to wonder about Ruby — how does Ruby know that line, is Ruby a comic too? and are all female comics this hot? — but we quickly learn why she’s so tuned into the comedy world: Ruby is a talent scout for Comedy Be TV and she’s looking for comedians for their diversity program. When she goes to join Alice, Sumi and Lindsay for a “friendly-only” drink, she extends an offer to Lindsay to audition for the program.

Alice pretends to be excited for her mentor but the fact that Lindsay stole some of her material for their set makes it difficult. But then Ruby also offers Alice a chance to audition for the program…and, suddenly, it’s Lindsay who’s forced to feign excitement. There’s only one slot in the diversity program and Lindsay and Alice are going to have to compete to win it. Neither seem thrilled about the prospect but Sumi — sweet, beautiful, oblivious Sumi — is excited enough for the both of them.

+ After the manifesto leaves everyone, including the Byte Club, questioning her loyalties, Mariana goes to Evan and insists that he track down the person who wrote it. He’s reluctant at first but when she pitches it as a way to slow Speckulate’s move towards becoming a publicly traded company, he relents. Evan calls her in his office and admits to finding the culprit: the manifesto came from Raj.

Now, admittedly, Raj is a terribly insecure guy and he’s clearly threatened by Mariana’s relationship with Evan, but the idea that he’d do this kind of damage to Mariana’s career? I don’t buy it. My top two suspects are: Evan, who wants so desperately to be with Mariana that he’d lob this grenade into their working relationship, and Isabella.

+ I was right to be weary of Isabella. It’s felt like she was trying to wedge her way into Mariana’s relationship with Raj from the start — despite having thrown herself at Gael prior to her arrival at the Coterie — and this week, her intentions are laid bare. She manipulates Raj and Mariana both with conflicting advice, looking to exacerbate the tension between the couple. But then, when Raj says he can’t perform at parties with her anymore, Isabella gets irate and breaks the mirror hanging over the mantle. Yeah, we’re into some Single White Female/Fatal Attraction territory with Isabella…I just hope no one gets axe murdered.

+ Malika is perplexing in this episode, to put it mildly. On the personal front, there’s this:

Isaac: Um, I don’t think I’m gonna stay the night tonight. I kind of feel like I need to be alone.
Malika: Do you have anxiety?
Isaac: I’m not crazy, Malika. I shouldn’t have told you, ’cause now you’re gonna think everything’s about that, and you know, I just I just have a lot of work to do.

That interaction felt terrible out of character…both that Malika would jump so quickly to anxiety being the reason Isaac wouldn’t stay and that she wouldn’t bother to correct Isaac when he conflated anxiety with being crazy. On the professional front, Malika’s attorney gets the “no protesting” condition of her plea deal thrown out and the city attorney has agreed to drop the sentence from one month to two weeks…and Malika pauses to question it? This is, ostensibly, the same deal she was offered before — the same deal she nearly accepted before — and yet now we’re having conversations about what Malika should do? I’m confused.