If you’re reading this, you’re probably some kind of nerd or geek or both. And if you’re a nerd or geek or both, you probably have at least some passing knowledge of The Legend of Zelda. It’s one of the most popular, successful and legendary video game franchises ever. Personally, I’ve only played Link’s Awakening on the Gameboy, but I still love the atmosphere around the game. I love a lot of the characters, the design and the lore and legends of Hyrule. If you’re already a fan, someone with a light love for the games, or someone who’s never even thought about Link, Zelda and the rest, The Legend of Gay Zelda will capture your attention and pull on your heart with its adorably nerdy stories of queer love between video game characters. The Legend of Gay Zelda is now available for download, it’s pay what you want and all proceeds go to the Trevor Project. 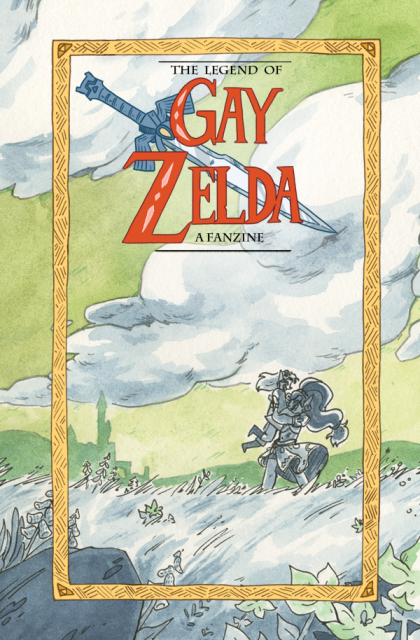 This zine is totally full of artists that I love and that I’ve featured here in Drawn to Comics. It’s got Sara Goetter, Natalie Riess, Aatmaja Pandya and Carey Pietsch. The book also includes great artists Alison Wilgus, Caitlin C, Hannah Fisher, Noella Whitney, Genue Revuelta and Jay Jacques. This is such a great lineup of cartoonists and artists and it really shows in the book just how much all of them love Zelda. Some of the artists made comics, some made single page illustrations and Pietsch closes out the zine with a long comic that’s eighteen pages long. 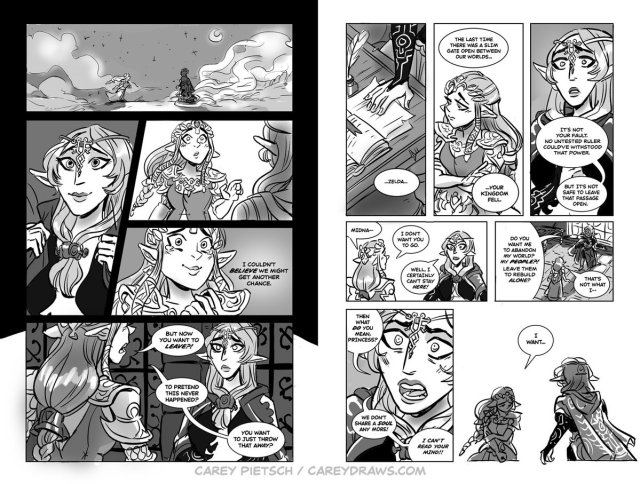 I’ve never even played Twilight Princess and still Pietsch’s comic about it made me cry. She does such a lovely job of capturing the tender romance that fans imagine between Princess Zelda and the titular Twilight Princess while staying completely true to the mythology and narrative of the game. There’s honestly a lot that the two princesses are talking about that I have zero context for, but I never got confused or lost while reading this comic because Pietsch does such a wonderful job of focusing on the characters and the connection between the two of them. 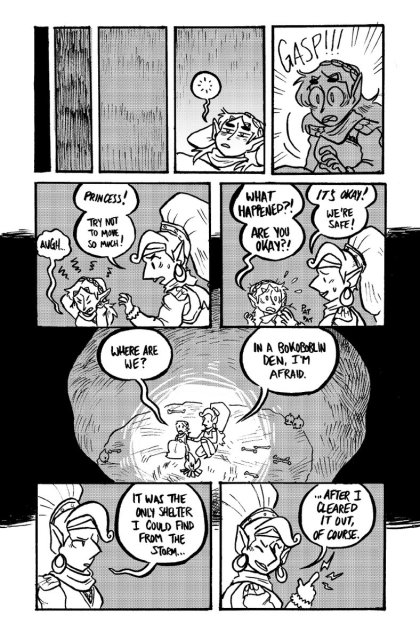 Earlier in the zine we get to see all sorts of LGBTQ headcanons for the characters. Sometimes the comics or illustrations focus on Link, the main playable character in the games, but most of them focus on Zelda herself and another female character from the series. We’ve got Zelda and Urbosa from the latest game, Breath of the Wild, Impa from Ocarina of Time, Sheik (Zelda’s male alter-ego) from that same game, and of course Zelda and Midna, the Twilight Princess herself. One of my favorite things is seeing queer creators celebrate their fandoms and making their fandoms more gay, and that’s exactly what you get here. It’s just so delightfully nerdy and gay. All of these cartoonists get to be 100% indulgent in their whole selves, combining all their loves into one project. It’s truly wonderful and truly nerdy and truly, truly gay. You can buy this comic from the contributors at comic cons like SPX.

Batgirl and the Birds of Prey #14

Join A+!
Related:Drawn to Comics