I think it’s pretty well documented that I’m a sucker for stories about witches. I’m also a sucker for comics by Carey Pietsch (pronounced like the fruit, as she would say), the artist who made the wonderful Marceline Gone Adrift with writer Meredith Gran. Recently, she’s put together two books of her own comics that combine these loves of mine. I already knew that I loved Pietsch’s art, her characters are endearing and she’s great at drawing people who are actually diverse and individuals, and her backgrounds and environments are full of life and detail. 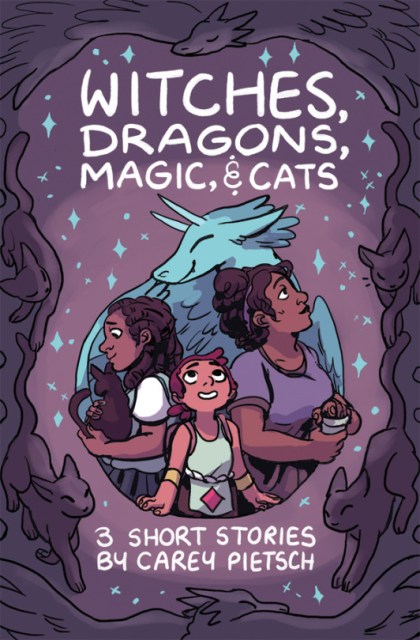 The first book, Witches, Dragons, Magic & Cats contains three stories about, surprise, surprise, witches, dragons, magic and cats, and none of the stories is a weak link. First up is “Familiar,” which is about a teen witch named Mariah who’s dealing with the loss of her friend and familiar, a cat named Pyxis. This story made me cry twice, once at the beginning, and once at the very touching and very cute end. The third story, “Mending,” is where the dragons come in. It’s a darling story about a young healer named Bree who lives in a “backwater” farming community and wants to get a good look at the dragons that are come into town being ridden by Guardians, who kind of remind me of the Grey Wardens from the Dragon Age games. 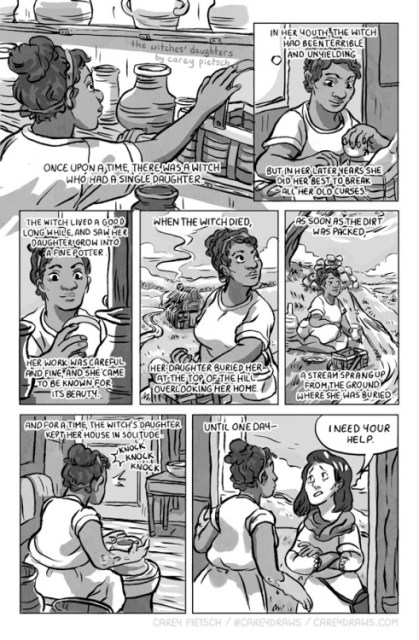 From “The Witches’ Daughters” by Carey Pietsch.

I had seen the second story, “The Witches’ Daughters” before, but I was beyond happy to see it again. I loved it the first time I saw it and loved it just as much, perhaps more, now that I’ve seen it in the context of Pietsch’s other comics, this time. This story is so clever and wonderfully built. I love the magic in it. It tells the story of a witch’s daughter, who has no magic herself, but is a skilled potter. Her witch mother had been cruel and prone to cursing others, but had changed her ways in her later years. The potter is living a solitary life, until one day when the daughter of another witch, one that was a rival to her mother, shows up at her door burdened with a curse that was placed on her mother and is causing everything she touches to dry up, ensuring that she’ll soon die of thirst. The dialogue between the two witches’ daughters is excellent, when the first daughter tells the second that she can’t help her because she’s not a witch like her mother, the second replies “but I see you are a potter — and so much of magic is being clever and fierce and kind. Can’t you make a cup that will heal me?” Like many of Pietsch’s stories, this one is made by its ending, and I’m not going to spoil it, but let’s just say that fans of lesbian witch love stories will definitely be happy.

Pietsch also put out another book called Lost Haven about a witch who loses her ability to read the stars and that, in turn, causes her to lose her healing abilities. She thinks that now that she can no longer be sure of how her healing advice will turn out, she’s no use as a healer, so she secludes herself and gives up on the outside world. That is, until one day, when a young boy comes with his familiar asking for her help in healing it. It doesn’t need healing, the witch says, it’s just pregnant, and she continues to help the young boy until he asks her for advice and she throws him out, thinking he’s just “wringing one last vision” out of her. After some time passes, the boy returns with a gift for the witch, and helps her change her mind about the way she’s been looking at the world. This story is sweet, and warm, and comfortable, and is the perfect comic to curl up with on an autumn night. 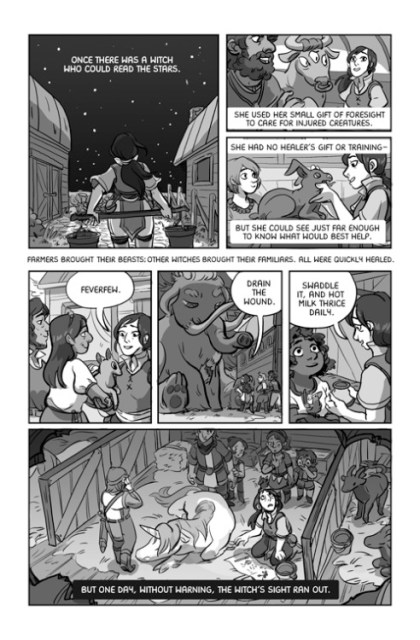 Much of Pietsch’s magic (get it?) comes from her ability to build a full, living world in which her characters dwell. In just a few pages Pietsch is able to transport her readers into a place with history, culture, rules for magic and new species of animals that all seems to fit perfectly and make sense. You really believe in the magic that’s on the page and you really feel the stories that are happening. More of her magic comes from the endings of her stories. She’s able to perfectly lead her characters into conclusions that will make you feel the highest possible number of feelings allowed. Each comic ends with your heart growing three sizes and tears forming in the corners of your eyes. 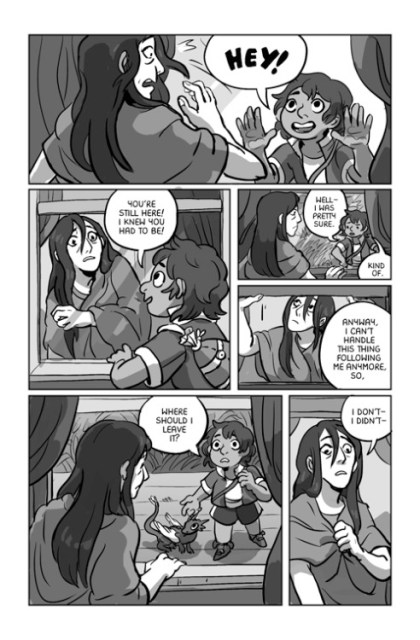 Both of these comics, along with a few others, are available for purchase digitally at Pietsch’s Gumroad, and she’s currently setting up a Storenvy, so make sure you’re looking out for that. You can find Pietsch online at her website, or you can follow her on twitter and tumblr, both of which I’d heartily recommend.

Another thing I’d recommend that you also check out this list of webcomics with black leads, put together by Joamette Gil. Some of them have been featured here before (like Agents of the Realm, School Spirit, Rock and Riot, Demon Street and As the Crow Flies), other will be featured soon, and many more deserve your attention. There are already a ton of great webcomics on this list for you to check out, plus, Gil is regularly updating the list with even more comics that you should read.