So, if you were on tumblr this last week and you run in the same type of tumblr circles I do, you probably ran into a super incredible, delightfully retro and wonderfully queer webcomic called Rock and Riot. Created by an artist and animation student from New Zealand named Chelsey Furedi, who says the comic “follows the tales of two opposing teenage gangs in the 1950s with an LGBTQ theme” who need to “set aside their differences to fight for what they have in common,” Rock and Riot is one of my favorite webcomic finds in a long time. You guys, this is like the perfect, poc-filled, queer lady-centered version of Grease that we’ve always dreamed of. 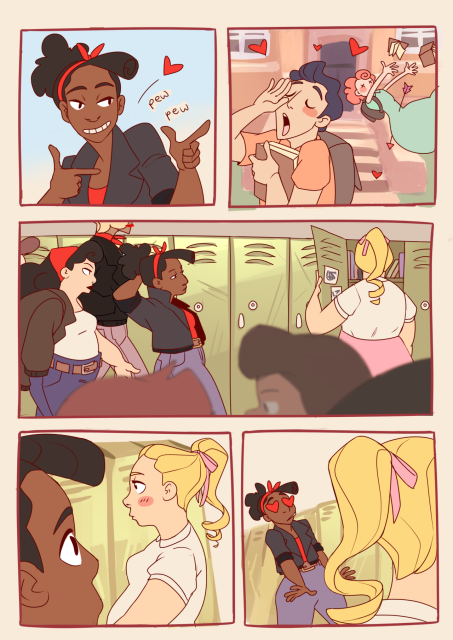 The comic starts with a sweet red convertible pulling up to an All-American High School and a tough as nails but also stylish as hell girl gang stepping out. This is Connie and her crew. All these girls are cool, but Connie is on a whole different level. She shows up at school shooting double finger guns, making guys and girls alike swoon outside the school. But even Connie can’t keep her cool when she walks into school and sees the school’s very own Sandra Dee (a cute and more than a little chubby girl in a pink skirt and ponytail named Carla).

Connie spends the rest of the comic trying to show off for Carla, flexing her muscles (which is my favorite part, and would totally work on me, by the way), smoking in the girl’s room and speeding by in her car, you know, the usual stuff. But, much to Connie’s surprise, none of her usual tricks seem to be working out. It’s all stupidly cute, in the absolutely best way possible. 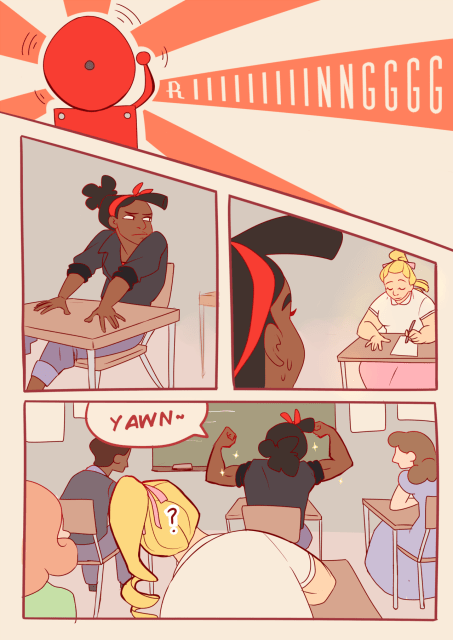 What we’ve seen so far is just the first chapter of a whole series of chronological stories that will each be told in chapters that are going to be around ten pages long. Furedi says that the next chapter is going to start going up this week, with new pages every Tuesday and Friday. She recently posted some preview art of a new (guy) gang who she says will be showing up in chapter two on her art tumblr (the first page of this second chapter just went up). I, for one, can not wait at all to see what’s coming up next in this comic.

Furedi has really hit a webcomic nerve here. As a fat Latina, I’m always searching for webcomics starring women of color and fat characters, and as a queer woman, I’m also always looking for quality webcomics starring queer women. This webcomic has all of that, plus really great art and diverse, distinct and stylish character designs that are dynamic, funny when it needs to be, cute when it wants to be and always distinct. Also, there’s just the fact that Grease is so beloved by so many in the queer lady community. I mean, a few weeks ago, there was this post about how a Kristen Stewart and Taylor Swift starring remake of Grease would be the perfect movie ever, and then, as if to answer the internet’s lesbian prayers, Rock and Riot shows up and puts a smile on all of our faces. If you want to pay alms for your prayers being answered, you can head on over to Furedi’s patreon and let her know just how much you appreciate the comic. 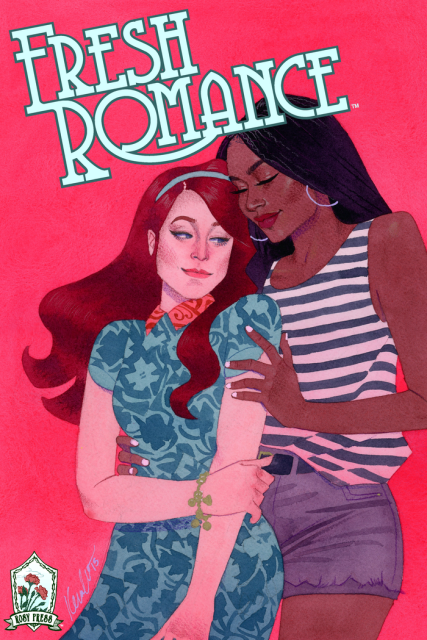 Another queer-filled romance comic that has the internet’s attention recently is the upcoming all-digital romance comic Fresh Romance, which is now live on Kickstarter. Each issue in this comic series will feature three romance stories, a relationship advice column, behind-the-scenes art and a fashion report. This seems seriously cool.

The first issue features work by Sarah Vaughn and Sarah Winifred Searle, Sarah Kuhn, Sally Jane Thompson and Savanna Ganucheau and the one I’m most looking forward to, a queer girl high school romance written by Bravest Warriors writer Kate Leth, drawn by Arielle Jovellanos and with colors by Amanda Scurti. Future contributors include Angela: Asgard’s Assassin and upcoming A-Force writer Marguerite Bennett, Maya Kern, the creator of one of my favorite webcomics Monster Pop! and a stretch goal story by Red Sonja and former Batgirl and Wonder Woman writer Gail Simone. Now that’s an all-star lineup. There’s only about a week left in the fundraising campaign, so if you’d like to get access to these digital comics, you better head on over and donate as soon as you can.