Hello, dragon fruits. Welcome to your weekly round-up of all the queer shenanigans happening on your teevee. There were no new episodes of One Big Happy or Arrow last week, and none of the promised bisexual happenings on Weird Loners, but some shows that don’t usually have gay things on them had gay things on them, and so here we are! One Big Happy and Arrow are both back with new episodes tomorrow night. Also, and most importantly, Orphan Black returns for its third season THIS SATURDAY NIGHT. I will obviously be recapping that one fully. Also, I have finally started The Returned, so I’ll be able to speak about that like an intelligent human person in the next week or two. 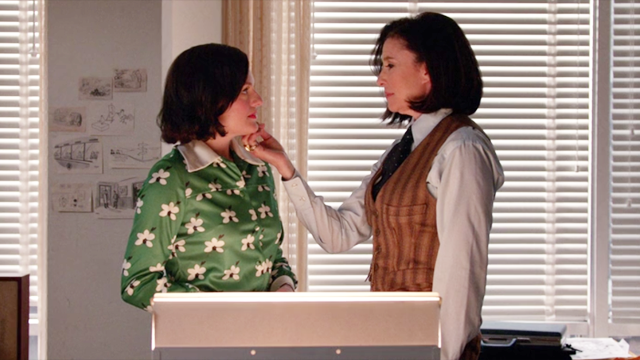 I want to paint you like one of my French girls.

Mad Men has gifted us with two lesbian characters over the last seven season: Joan’s roommate, Carol, who confessed her love for Joan and was last seen crying alone in the bathroom in season one; and Joyce Ramsay, the Life magazine photographer who one time licked Peggy’s face and also said, “He doesn’t own your vagina” when Peggy rebuffed her advances because she had a boyfriend. (Peggy ended up stabbing her boyfriend in the gut on accident. She should have just made out with Joyce.)

Last night, a new queer character whisked onto the scene, wearing pantsuits like you would not believe and making moves on both Peggy and Stan. Her name is Pima Ryan and she is a famous photographer that Peggy is accused of “digging deep” for because she wants a woman on the vermouth campaign. Pima is into Peggy’s whole deal right away, flattering her for being in charge of the photo shoot (and, by extension, all the men working at the photo shoot).

Later, in Peggy’s office (after having sex with Stan in the darkroom), looking over the proofs of her photos, Pima goes: 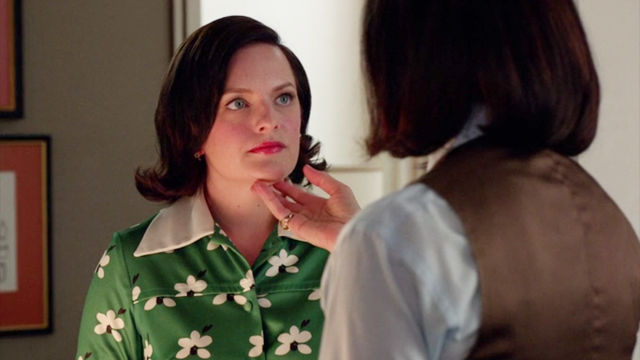 Pima: You’ve never been married?
Peggy: Nope.
Pima: Me either. The adventures I would have missed. I’d love to take your picture.
Peggy: I don’t know about that.
Pima: The way you’re looking at me, right now. I would capture that.

Their exchange is tense and also a silent power struggle and also a dance of respect, and for one hot second, you think Peggy is actually going to get in there. She doesn’t, but she gets so flummoxed! She comes so close! After she finds out Pima went for Stan too, she’s pissed. I could write a novel on this dynamic, but I’d rather you watch it and tell me what you think! Also, here’s the other pantsuit: 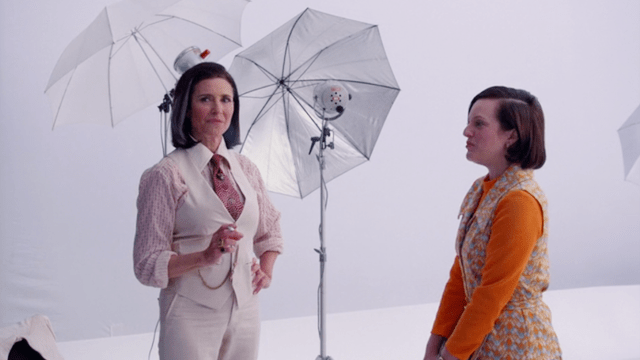 Eat your heart out, Bette Porter. 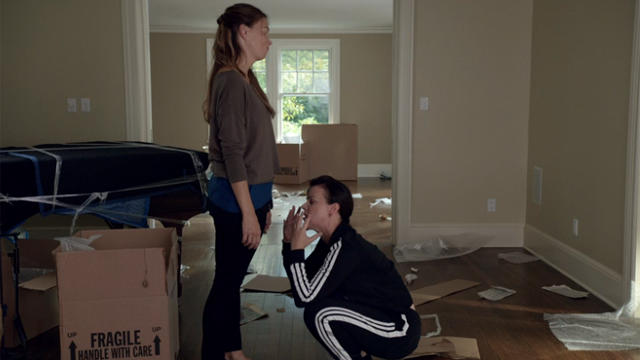 You’re never going to convince my vagina that toeing is a thing.

TV Land’s new comedy is a good ol’ time and I’m not just saying that because I’m super into Sutton Foster’s whole deal, as I made clear last week when I was whining about Bunheads. Two episodes appeared this week, and they were both very cute and very lady-led and very Maggie-inclusive. (Maggie is Liza’s lesbian best friend, in case you’ve forgotten.)

In the first episode, “Liza Sows Her Oates,” Liza is tasked with making Joyce Carol Oates relevant to the Twitter generation, and somehow her head doesn’t explode when someone says that to her. Instead, she cooks up a social media campaign where young feminists tweet photos of their boobs covered with signs that say #ShowUsYourOates. She’s also still dating the 26-year-old tattoo artist and getting cold feet about it, until Maggie swoops in and tells her she looks younger and better and happier than ever because she’s being herself. Also, Liza is living with Maggie now, so that’s good news.

In the second episode, “IRL,” Maggie ups her Cupid game, texting the tattoo artist on Liza’s behalf, while they’re driving to Liza’s old house in Jersey to pack up her furniture. She saves the day in every way, finally convincing Maggie to just get in there and go for it with her boyfriend — by pep-talking her vagina, who she names “Frida,” obviously — and by loading up Liza’s moving van and driving her stuff to Brooklyn, where she can sell it to overzealous hipsters for ten times the amount she would have gotten from the consignment furniture guy.

Also, Lizzie Mcguire is on this show as a grown-up. She’s great. I know I mentioned it last week, but it’s worth repeating. 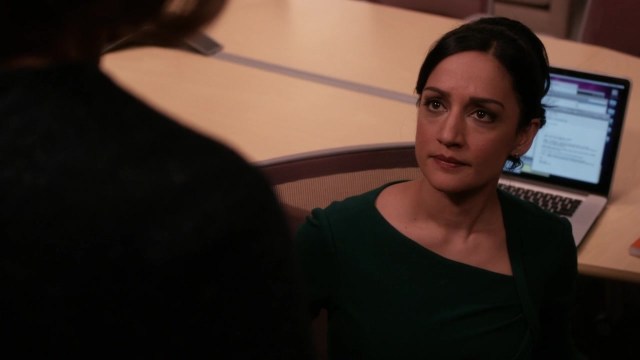 What if I retire to concentrate on my Lisbeth Salander fan fiction? WHAT THEN?

Kalinda’s finally back in the thick of things on this week’s The Good Wife, as the show is setting up her departure arc. The truth about the metadata is out, so everyone has to scramble to keep Diane from getting disbarred. They work out a deal with the police where someone has to testify against Lemond Bishop and they’ll forget Diane presented false evidence to a jury (even though she did it on accident!), so she doesn’t have to go to jail. Kalinda is very seriously thinking about doing it, but Cary warns her that Bishop will kill her, and so he bites the bullet and says he’ll testify.

TGW‘s bosses have said they won’t kill Kalinda, so my best guess is she goes on the run (or in witness protection) after selling out Bishop in a major way in the end. Oh, how I wanted her to ride off into the sunset with Lana! 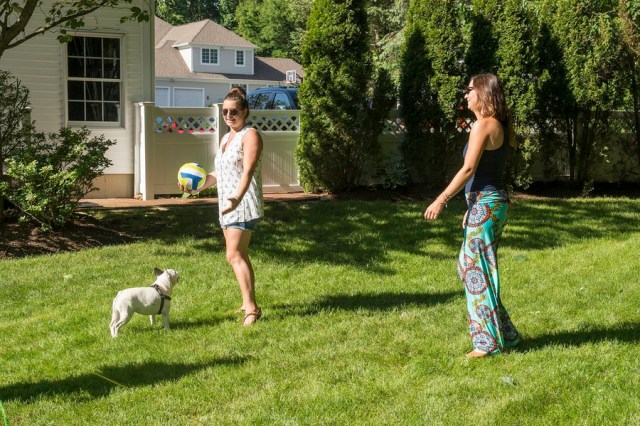 I’ll never love a baby as much as I love our dogs, FYI.

This week, Laura’s family starts pressuring her and Sam to start popping out babies now that they’re married. Laura’s brother takes the reins at the family dinner and demands when and where and most especially how. He’s obsessed with who’s “going first.” They tell him they’re going to hit up a fertility doctor and whoever has the least number of eggs is who will carry their first child. “So it’s just based on engineering and not emotions?” is an actual thing he says.

Laura and Sam do go to a fertility doctor. They’re gobsmacked when he shows them the price tag on insemination, and they’re even more weirded out when they go home to search “donor Facebook,” which is this website where you can learn all about the donors and also hear audio clips of their voices.

Bold and the Beautiful 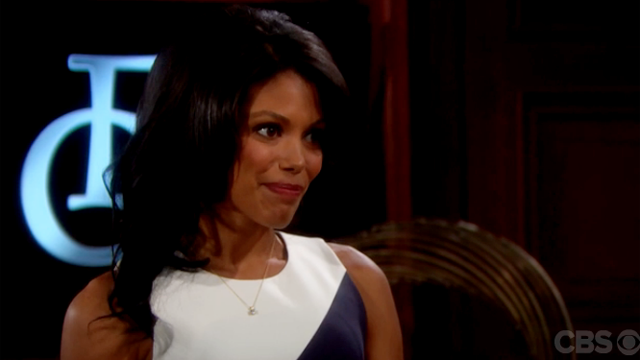 Like how hard is it to use Google, seriously?

Well, B&B finally stopped having their characters say Maya was “born a man” this week, and finally started having them say things like, “And that’s why she didn’t tell anyone she was born — I mean, tell anyone her secret.” Maya’s sister, Nicole, is still running around stirring up drama behind her back. First, she interrogates Maya’s former fiance, Carter, who comes to the conclusion that Maya never told him “her secret” because she never really planned to marry him. But he believes that Maya will tell Nick “her secret” after her proposes.

Later, Maya pops some estrogen pills in Nick’s office, in the most conspicuous way ever, and Nick finds the prescription and feels confused. 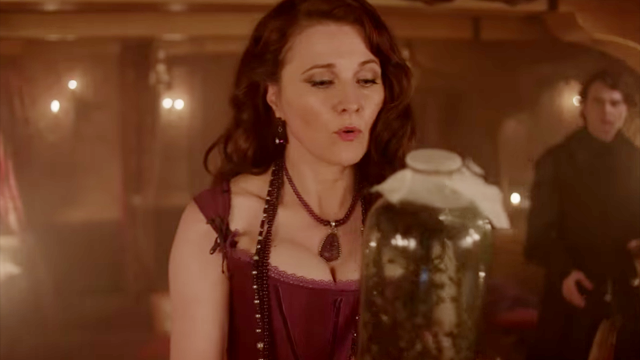 You call this a present? Ron Swanson carved a canoe for me with his bare hands.

Big thanks to Rachel Watkins, who tipped me off to some actual queer action on Salem last night. I don’t watch Salem due to the blood blood blood, but Riese does, and she says: “Lips touched lips. Specifically, Xena’s lips touched the lips of the witch Abby and I refer to as Salem’s Talyor Swift. I think it was part of some dark witch magic, though.”

+ 7 TV Shows About Trans Women Coming Soon to Your TV
Which of these shows featuring trans women are you most excited for?

+ Pretty Little Liars Episode 525 Recap: The Greatest Show on Earth
The pAtriArchy is A, just as we suspected.

+ Grey’s Anatomy Episode 1118 Recap: Field Trip To The Zoo
Callie agrees to go on a date with a police officer whose life she saved, kind of.

+ Discovery Life’s Trans Docuseries “New Girls On The Block” is Flawed, But Not Beyond Redemption
Discovery Life will premiere a new documentary series on April 11th about a circle of trans women friends, but the producers dip into cliche a little too much.

+ VIDEO: Orange Is the New Black’s Season 3 Trailer Is Everything You Need And More
“It’s not just sex. It’s love. It’s two people connecting … with four other people … and aliens.”

+ Fan Fiction Friday: 7 Clarke/Lexa Stories To Force You Into The 100
Watch Clexa fall in love on road trips across the United States and in Quidditch matches at Hogwarts School of Witchcraft and Wizardry!

+ Grey’s Anatomy 1119: Knick Knack Paddy Whack
Callie went on an off-screen date with that dude cop and hated him. We did all that processing for nothing!